The 30-year-old Spence Jr. (27-0, 21 KOs) said he’s not long for the 147-pound weight limit after defending his WBC and IBF championships during his third consecutive FOX pay per view event.

“I want to fight the best fighters out there, and I want to be an undefeated champion. I’m on the verge of cleaning out the division. Probably two or three more then we’ll see [before moving on to 154],” Spence told the “PBC Podcast” hosted by Kenneth Bouhairie and Michael Rosenthal. 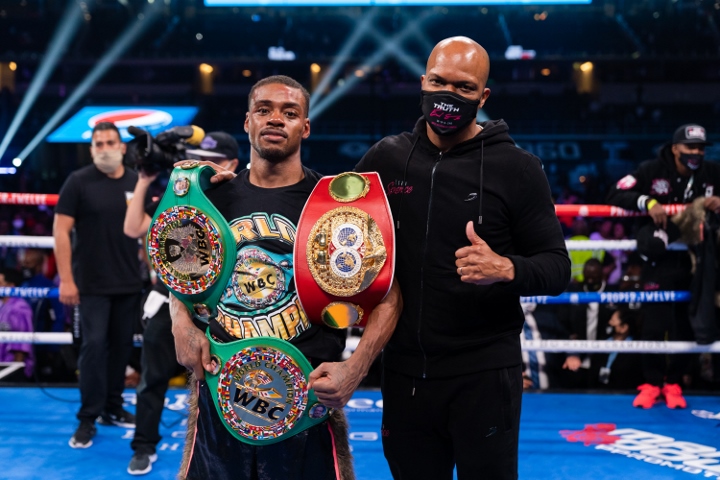 Spence has steamrolled through, in order, Kell Brook, Lamont Peterson, Carlos Ocampo, Mikey Garcia, Shawn Porter and Danny Garcia since first traveling to the UK in 2017 and besting Brook in his first world title fight at welterweight.

Spence said he still ranks the Brook fight as the best win on his resume.

He believes that his body of work over his career is also better than adversary and WBO welterweight champion Terence Crawford, who was sitting ringside to watch Spence’s miraculous comeback following a near-fatal car accident last year.

“As far as opponents, I feel like I’m over [Crawford] in that category,” said Spence. “A Porter rematch may be good. The first fight was an exciting fight. The second one would probably be like the first one.”

Spence also shared that he’s become increasingly annoyed of having to answer inquiries about Crawford when he’s preparing for a different fighter.

“I get tired of people asking me about him [Terence Crawford] when I have a fight coming up. People asking me about Terence Crawford two days before I’m fighting Danny Garcia,” said Spence. “I feel like they’re being dismissive of Danny Garcia. When I don’t have a fight coming up, I don’t get tired of it. It comes with the territory. When you’re in the same weight class, you’re going to get those questions.”

Spence will have plenty of options for his next few fights, and the names on the 147-pound board that are sounded off more often than Crawford are Manny Pacquiao, Yordenis Ugas, Keith Thurman and Porter.