As BoxingScene.com previously reported, WBC interim-heavyweight champion Alexander Povetkin will be unable to face Dillian Whyte in a rematch on January 30th.

Back in August, Povetkin brutally knocked out Whyte in five rounds at Matchroom’s Fight Camp in Brentwood.

The second fight was scheduled to take place last month, on November 21. The fight was postponed after Povetkin was hospitalized with COVID-19. 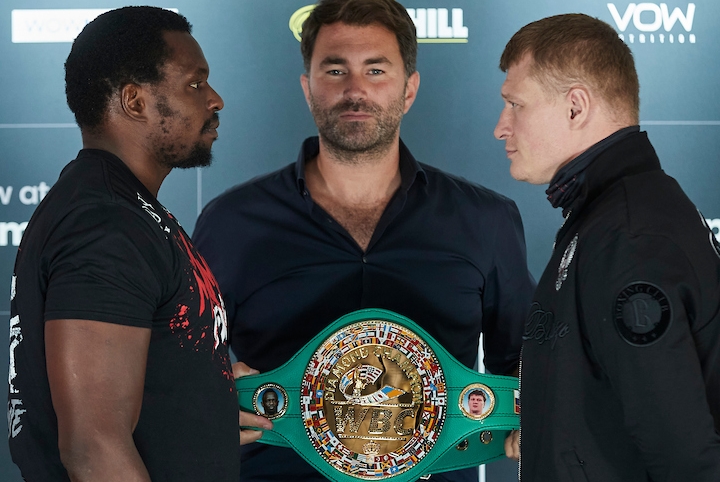 Both sides were targeting a tentative date of January 30 – but then it was revealed by Povetkin’s promoter, Andrei Ryabinsky, that his boxer was still recovering from COVID and was recently hospitalized for additional tests.

Povetkin may have rushed his recovery and went back to his training camp too quickly after being released from the hospital.

In his estimation, Povetkin will be ready to move forward with the rematch by late winter or early spring – with dates being viewed in late-February and March.

“Alexander is doing fine, he needs to sit at home and come to his senses, and then quietly and very carefully start training. In fact, he had a hard time overcoming this coronavirus,” Ryabinsky told Vasiliy Konov.

“Also, after [the initial] recovery, we did thorough medical examinations, which showed that he needed more time to recover and had to take care of his health. When the fight with Whyte takes place will depend on how well Alexander will recover. But I think that this fight can tentatively take place in late winter or early spring – dependent on the doctors allow it. But there will definitely not be a fight on January 30.”