This year wasn’t as easy as 2019 in so many ways for Katie Taylor. Still, despite the COVID-19 pandemic ripping through boxing and the rest of the world, the 34-year-old lightweight world champion from Bray, Ireland, managed to succeed. 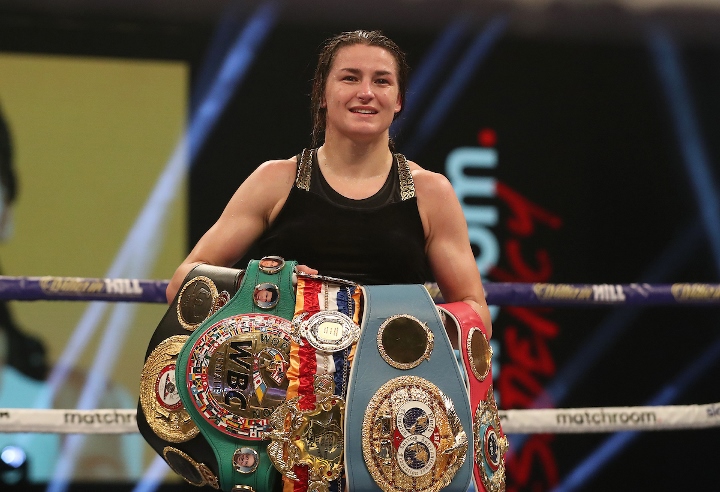 Taylor just beat out Jessica McCaskill, who handed previous BWAA FFOY winner Cecilia Braekhus her first defeat with a majority-decision back in August.

“It was a tough decision between Katie and Jessica,” said Thomas Gerbasi, chairman of the BWAA women’s seven-person selection committee. “In fairness, the McCaskill-Braekhus fight was very close, while Katie beat Delfine Persoon the second time more convincing than she did the first time, and Delfine has long been on the pound-for-pound list.

“Then, Katie defended all of her titles against undefeated Miriam Gutierrez, who came in highly touted and was among The Ring’s top five lightweights. Katie beat her convincingly. Like I said, it was a tough vote this year, and I think you can also toss Mikaela Mayer and Terri Harper into the mix and say they had strong cases, too.

“It was a nice race, which shows where women’s boxing is going these days.”

Taylor was contacted Monday morning about the news.

“It’s such an honor to be chosen twice,” she said. “To win this award again is amazing. I’m hoping to be fighting in February or March of next year, and we’re not too sure who or where it will be, but I’m excited to be fighting again.

“Going into 2020, I was hoping this would be a good year for me. I was happy to finish off the year fighting my mandatory and I’m delighted to finish my year off strong. I always go into every year trying to make huge strides in the sport.”

Taylor unseated Claressa Shields, the BWAA 2018 Female Fighter of the Year, as the BWAA’s pound-for-pound best last December. Taylor and Shields are followed in the BWAA pound-for-pound top-10 by Braekhus and then McCaskill, who leaped from No. 10 to No. 4 after her historic victory.

Because of McCaskill’s move from No. 10 to No. 4, while Amanda Serrano, Persoon, Yesica Yolanda Bopp and Daniela Romina Bermudez each drop down one spot, respectively, from No. 5 to No. 8.

Argentina’s Marcela Acuna debuts and No. 9, and the United States’ Mikaela Mayer enters at No. 10, with each replacing Mariana Juarez and Canada’s Jelena Mrdjenovich.