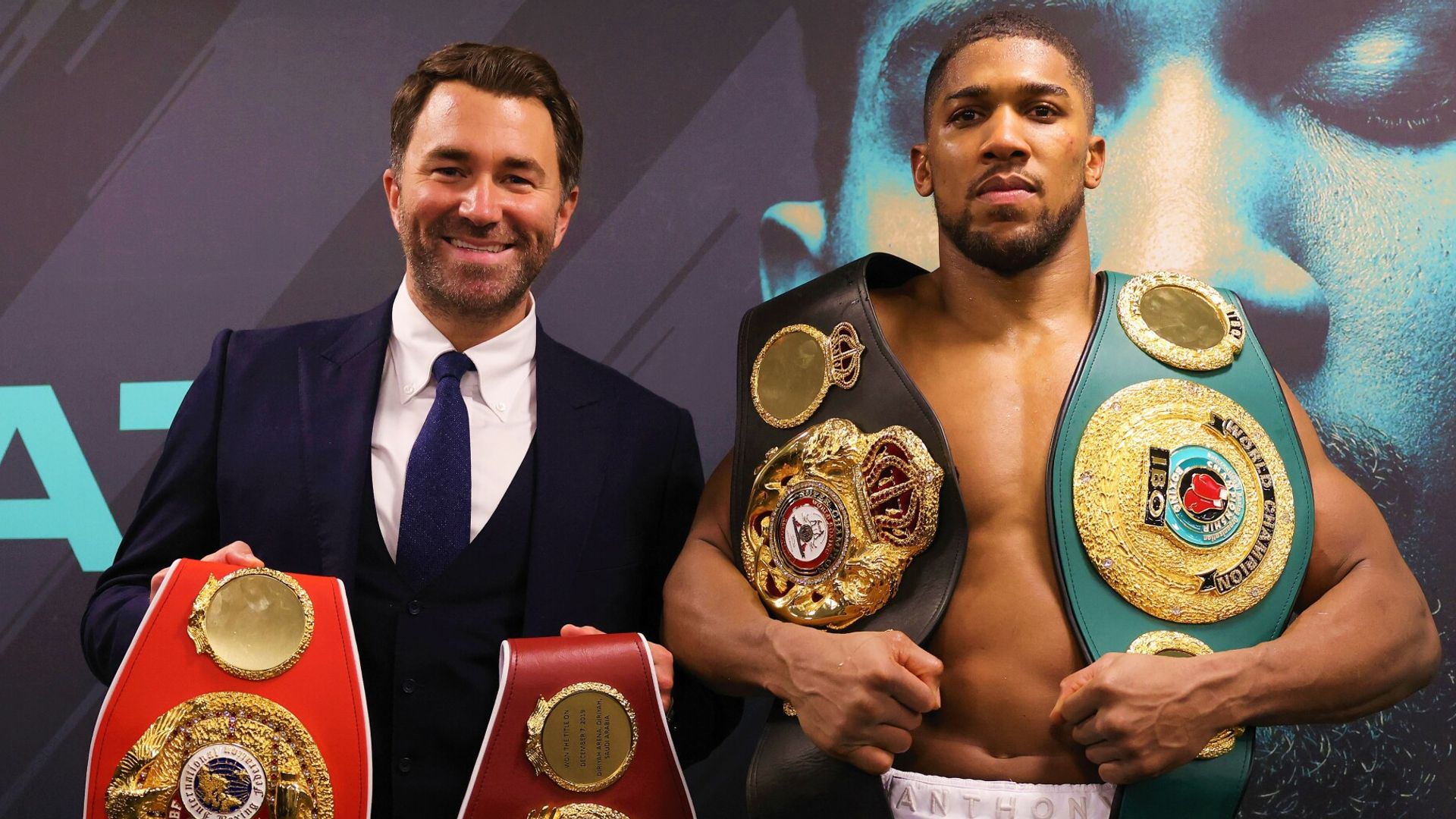 Eddie Hearn on Joshua vs Fury negotiations: “I think we’re all in the same position. We want to move forward with the fight, quickly as well, which is good news for fans.”

By Richard Damerell and James Cole

Anthony Joshua against Tyson Fury is being planned for May after fresh talks, but Oleksandr Usyk’s WBO mandatory title shot is an ‘issue’, says promoter Eddie Hearn.

Joshua retained his WBA, IBF and WBO heavyweight belts with a ninth-round knockout of Kubrat Pulev on Saturday, which kept him on course for an undisputed title fight against WBC champion Tyson Fury next year.

Hearn has already held “positive” negotiations with Fury’s US promoter Bob Arum as they attempt to finalise a two-fight deal.

“I think we’re all in the same position. We want to move forward with the fight, quickly as well, which is good news for fans.

“Just trying to solve any remaining issues of the fight, of which there aren’t many, to be honest with you, and try and move forward collectively to let the governing bodies know that we plan to stage this fight probably in May, and we would like this to be for the undisputed heavyweight championship of the world.

“A few small issues to iron out, but I think we can start look at drawing up contracts and try to get this moving.

“Here on both sides, every member of each team wants to do this fight. We all acknowledge this is the biggest fight in boxing, this is the best fight for both guys. This is for the undisputed heavyweight championship of the world. Why are you in the sport, if you don’t want this fight?”

Fury is currently undergoing a mediation process with Deontay Wilder following a dispute about a third WBC title fight, while Joshua must fulfil a mandatory defence of his WBO belt against Usyk.

Hearn will appeal to the WBO to allow Joshua versus Fury first, while he is hopeful that the Wilder situation will be resolved.

“If you listen to Bob, that’s not a problem,” said Hearn. “He is a lawyer and he knows his contracts and he tells us that Tyson Fury is contractually free to take any fight he wants.

“I do believe Deontay Wilder is appealing that, in the US courts, but we don’t expect that to be a problem.

“Oleksandr Usyk is the WBO mandatory, we have to respect that, and the rules as well. We’ll be speaking to him to make sure he’s happy with a potential resolution.

Will Usyk allow AJ vs Fury to happen?

WBO president Paco Valcarcel appeared to indicate that a mandatory defence would be enforced on Joshua, who would risk losing the belt if he did not fulfil a fight against Usyk.

He tweeted: “[Promoter] Eddie Hearn knows the meaning of commitment.

“The ball is in Hearn’s court.”

Usyk’s co-promoter Alexander Krassyuk, who works alongside Hearn, has suggested the Ukrainian is not willing to wait for a world title fight.

He told Sky Sports: “My prediction, my plan and our strategy is to make AJ vs Usyk in April or May 2021.

“This is the WBO who has the power to enforce the champion for the mandatory.

“Though everyone wants to see AJ fighting Fury I don’t feel this fight is likely to happen soon.”