Eddie Hearn knows it’s his job and his job only to deliver a British boxing super-fight.

The Matchroom Boxing head honcho was at ringside at the SSE Arena in Wembley, London on Saturday as Anthony Joshua retained his world heavyweight titles.

Joshua took on his IBF mandatory challenger Kubrat Pulev, dropping him four times en-route to a ninth-round stoppage while also keeping hold of his WBA Super, IBO and WBO belts and staying on course for a showdown against Tyson Fury.

And Hearn knows that it’s now or never for the fight between Joshua and the WBC king Fury –– with a two-fight deal in the offing.

“It was an amazing fight,” Hearn, whose promotional charge Lawrence Okolie blasted out Nikodem Jezewski inside two rounds to set up a vacant WBO world title fight at cruiserweight against Krzysztof Glowacki, said about the main event just across the road from the 90,000-seat Wembley Stadium. “The fight was what it was, we got the win, it was a brutal but composed performance and it was exactly what Joshua needed.” 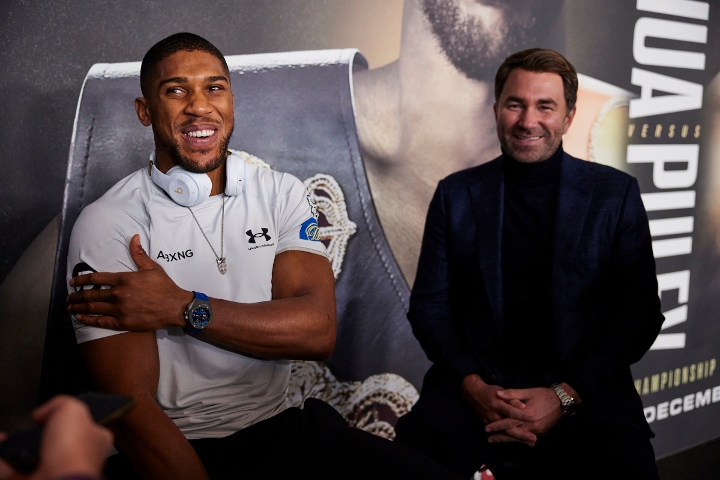 Fury criticised Joshua’s display, stating that he “sh-t himself” when asked about the all-British showdown with the WBC champion and saying that he “can’t wait to knock him out”.

Hearn, though, is ready to enter into talks with Fury’s representatives as soon as possible in the hope of getting one of the world’s biggest fights to date over the line.

“I can’t make it clearer from our side that everybody wants the fight,” he added. “It’s a natural fight. There’s nobody on the team who doesn’t want the fight. ‘AJ’ isn’t the kind of guy who is going to come out, screaming and shouting people’s names.

“Of course, he wants the fight and I’m going to keep schtum and tell you that it’s my job to deliver that fight next and I’ll do everything that I can to deliver it and we should start that immediately.”

Both men have given their consent to a two-fight agreement and the financial terms state that the first bout will be a 50/50 purse split, while the rematch will be a 60/40 split in favour of whoever wins the first. It is unknown where and when the fights are going to happen, though the most likely venue seems the Middle East due to its ability to bring in revenue to the contest.

Further details regarding the fight will be revealed in due course.