Another night, another showcase performance from Shakur Stevenson.

The latest step in the career of the 2016 Olympic Silver medalist and unbeaten former featherweight titlist humble Providence’s Toka Kahn Clary over 10 rounds Saturday evening live on ESPN from The Bubble at MGM Grand in Las Vegas.

Judges Lisa Giampa, Dave Moretti and Don Trella all scored the contest 100-90 in favor of Stevenson.

Stevenson barely needed a minute to settle into a groove. Both boxers sought to establish their jab; Stevenson was far more successful with the task, rocking Kahn Clary with a stiff right jab midway through the opening round. The unbeaten Newark native landed a combination later in the round, followed by a left hand to the body just before the bell.

Kahn Clary tried to untrack his offense in round two, though merely put himself in the line of fire as a result. Stevenson once again rocked the Providence-based Liberian southpaw, this time with an uppercut on the inside. Kahn Clary shook off the blow but wasn’t able to respond with anything of substance.

Stevenson continued to assert himself in round three. The 23-year old Newark native continued to shoot his jab, pushing Kahn Clary around the ring while rarely getting hit in return. 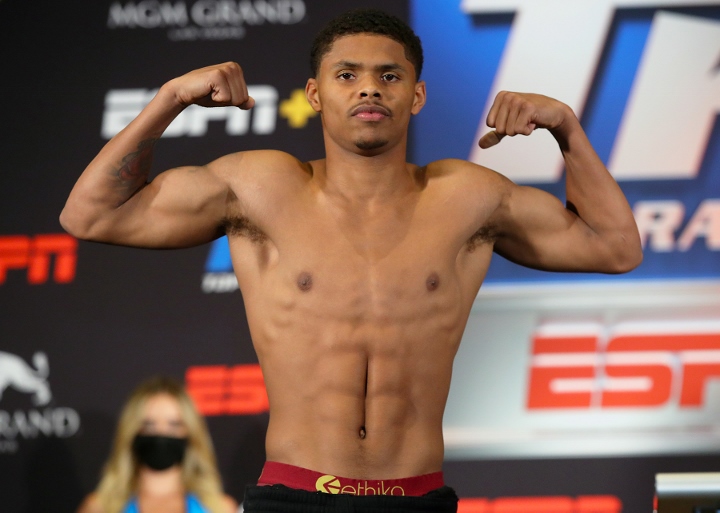 The fight hit a familiar stride by round four, rarely changing pace as Stevenson was in full control. The former featherweight titlist targetedKahn Clary’s body while steadily working his jab.

Kahn Clary enjoyed a brief moment of success in round six, twice catching Stevenson clean. For whatever reason, the rare offensive burst prompted a warning from referee Kenny Bayless for a phantom foul.

Stevenson committed more to his punches in round seven, throwing purposeful left hands while continuing to target the body. Kahn Clary was long past the point of having a chance to win the fight but continued to come forward as if he was one punch away from shocking the world.

The moment never came close to occurring, in fact to the point of where an open debate developed as to whether or not a mercy stoppage was in order. That call was likely never going to come from Kahn Clary’s corner, as he was working with Hall of Fame trainer Freddie Roach for the night after his coach Hector Bermudez tested positive for COVID-19. With that simply came the decision to proceed with the night, which did little more than provide Stevenson with 10 more rounds and another win on the year.

Kahn Clary pushed his jab in the 10th and final round, one where Stevenson largely played defense and—on several occasions—literally ran around the ring as if to take a victory lap. The early celebration was for good reason, as Stevenson statistically and physically dominated across the board as he landed 151-of-514 punches for a 29% clip according to Compubox statistics. Ever the defensive specialist, Stevenson managed to limit Kahn Clary to just 48-of-529 punches for a miserable 9% connect rate.

Scoring was academic in the end, with Stevenson enjoying his second straight win at junior lightweight after abandoning his featherweight title reign. Another knockout win to go with his 6th round stoppage of Felix Caraballo this past June would have been preferred, though Stevenson quickly realized what he had in front of him.

Kahn Clary ends a three-fight win streak with the defeat as he falls to 28-3 (19KOs). His last loss came in October 2018, dropping a competitive but clear 12-round decision to England’s Kid Galahad in their featherweight title eliminator.

As for Stevenson (15-0, 8Os) the win over Kahn Clary gives him something he hadn’t previously seen as a pro—another left-handed fighter in the opposite corner.

Saturday’s fight checked off that box, serving its purpose given the talent atop the 130-pound division. Stevenson is angling for a title fight in 2021, beginning with Long Island-bred southpaw Jamel Herring who defends his WBO title versus Carl Frampton in the first quarter of 2021.

Stevenson is the mandatory challenger to Herring’s title, a ranking he was granted in exchange for abandoning his featherweight title reign earlier this year.

“I want the WBO belt first,” insists Stevenson of his early 2021 wish list. “The winner out of [former two-division titlist Carl] Frampton and Jamel have to come see me.

“After that, we’re gonna go straight to Berchelt.”