Even before unified heavyweight world titlist Anthony Joshua knocked out mandatory challenger Kubrat Pulev on Saturday there was already much discussion about a possible showdown with champion Tyson Fury for the undisputed title.

The drumbeat for a fight between the British countrymen grew even louder after Joshua destroyed Pulev at the SSE Arena, Wembley in London, where a socially distanced crowd of about 1,000 spectators – including Floyd Mayweather — watched as Joshua won handily.

Joshua used a steady diet of stiff jabs and brutal right uppercuts throughout the fight as he dropped Pulev twice in the third round and twice more in the ninth, including for a highlight-reel knockout at 2 minutes, 58 seconds of the ninth round of an utterly one-sided rout. 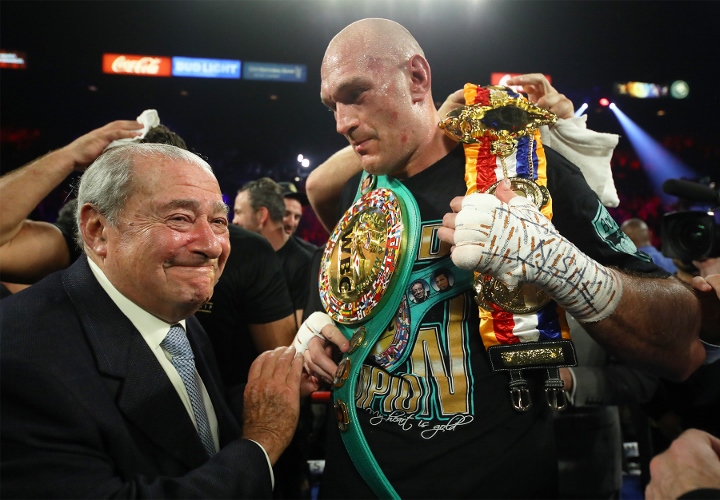 Some 5,200 miles away in Las Vegas, Top Rank chairman Bob Arum, the co-promoter of Pulev and Fury watched Joshua take Pulev apart. Arum, of course, was hoping Pulev (28-2, 14 KOs), 39, of Bulgaria, could pull the upset but now said he will turn his attention to getting a deal done for Fury to face Joshua.

Arum said he believes it can be made quickly, especially since both camps said several months ago that they had already reached an agreement on how to split the money.

“That fight will be the easiest fight to make, no f–king around, no nothing,” Arum told BoxingScene.com shortly after Joshua-Pulev.

“The basic terms have already been agreed on and so I think we’ll go to a memorandum of understanding and then decide and figure out mutually a site for it, how the television is going to be distributed and things like that.”

“It’s not about the opponent — it’s about who has got the belt, and if that’s Tyson Fury, let it be Tyson Fury,” Joshua said. “It’s one fight at a time, picking them off one by one.”

Arum said he believed if the fight is made it would most likely end up at a site to be determined in the Middle East, where Joshua easily outpointed Andy Ruiz in a rematch last December to regain the belts he lost by upset knockout in his previous fight in June 2019 in New York. Joshua-Ruiz II took place in Diriyah, Saudi Arabia, where a group put up tens of millions to host the fight and constructed a temporary stadium for it.

When would the fight take place?

“This is not normal times because of the Covid, so it would either be right before or sometime after Ramadan,” Arum said of the observance of Muslim holiday, which begins April 12 and ends May 11.

Although Hearn and Fury co-promoter Frank Warren are rivals in the U.K., Arum said that would be no issue in making the bout. Arum and Hearn have made various fights together with little problem and he said this would be more of the same.

“I’ve never had any trouble with Eddie,” Arum said. “Once the determination is made to do the fight it becomes relatively easy and all the pieces fall in place.”

There are two potential issues that could throw a wrench into the fight but Arum, the optimist, said he did not think they would sidetrack it.

One is the fact that former undisputed cruiserweight world champion Oleksandr Usyk, who is co-promoted by Hearn, stands as a Joshua mandatory challenger and the fight is due next. It remains to be seen if there is a deal to be made to get Usyk to step aside but his team has said they want the title fight.

Shortly after Saturday’s fight, WBO president Francisco “Paco” Valcarcel seemed to indicate the fight would have to be next, writing on social media, “Anthony Joshua looked sensational against Kubrat Pulev. As to the WBO belt, Eddie Hearn knows the meaning of commitment; the ball is in Hearn’s court.”

Although one of the major keys of a Fury-Joshua fight is for all four major sanctioning body heavyweight titles to all be at stake for the first time in the four-belt era, Arum said was dismissive.

“The worst that happens is the (mandatory) fight is enforced so they strip Joshua and we forget about that title,” Arum said.

The other issue that looms is that former titlist Deontay Wilder, whom Fury (30-0-1, 21 KOs), 32, knocked out in their rematch in February, is seeking to enforce what his team believes is a right to a third fight. Wilder exercised his contractual right to the third bout following the loss in February. But the fight has yet to take place and the Fury side says that the time limit on the rematch option has expired, meaning Fury is no longer obligated to the bout. Wilder, per his contractual right, has taken Fury to mediation on the matter to try to settle it. Is that does not work, Wilder co-manager Shelly Finkel has said the next step would be binding arbitration.

“The lawyers on our side have all been over it and there’s no valid claim on their part,” Arum said. “Can there be a claim? Sure, (Donald) Trump brought them (in attempt to overturn results of the presidential election), but again we’re confident that the contract is over. I’m not gonna opine on the legal situation but does the arbitrator have the power to stop a fight that’s in the Middle East? I don’t think so, but I don’t know. I don’t even want to get involved in that.”

Back boxing instead of business, Arum said Joshua performed well in the victory Saturday but “I liked what I saw as far as Fury is concerned. I just think Joshua was very tentative. Pulev, you can’t fault him for it. He tried his best and came up short. It’s all you can ask for from a fighter.”

Now Arum hopes it is on to Fury-Joshua, which looms as the biggest fight in boxing. Arum said it would be an absolutely enormous event.

“Worldwide it would be like the first (Muhammad) Ali-(Joe) Frazier fight (in 1971). Huge,” he said. “In the United States not quite as huge.”