Edgar Berlanga put an exclamation point on a fantastic 2020 campaign.

The explosive super middleweight knockout artist still has yet to see the second round of a given prizefight. His latest hit came Saturday evening, as he stopped San Diego’s Ulises Sierra inside the 1st round live on ESPN from The Bubble at MGM Grand in Las Vegas.

Berlanga scored three knockdowns in forcing the stoppage at 2:40 of round one.

Sierra lived up to his pre-fight promise of coming out aggressive, even if that strategy didn’t last very long. A wild left hook by the San Diegan was immediately met with a right hand by Berlanga. Sierra began to fight in reverse, though was unable to avoid the freakish power of the Brooklyn-based Boricua puncher. 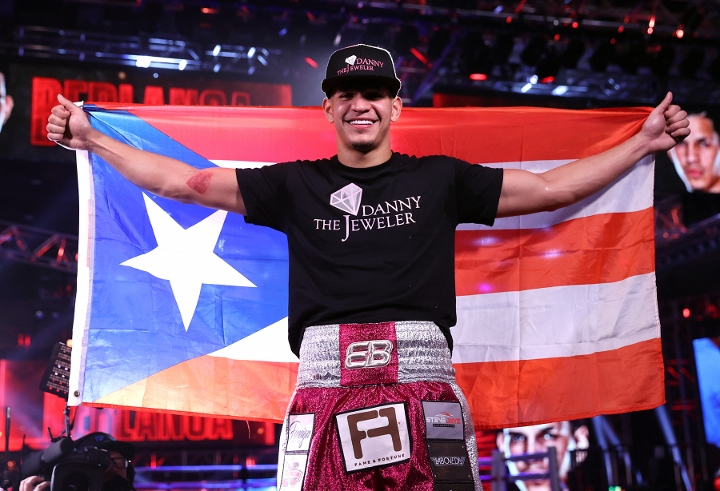 Berlanga scored the bout’s first knockdown 90 seconds in, as a series of right hands willed Sierra to the canvas. Sierra barely beat the count, but his soon-to-be-conqueror had already seen everything he needed to figure out how things would play out for the rest of the night.

“I knew it wasn’t going out of the first round,” Berlanga told BoxingScene.com. “Once I saw him cover up, I knew that was it for him.”

Sierra was forced to take another mandatory eight-count with less than a minute to go. More right hands had Sierra spinning into the ropes, accurately called a knockdown by referee Russell Mora.

Sierra insisted he wanted to continue, though Berlanga wasn’t interested in allowing him to stick around. Berlanga closed the show with a right hand a left hook which floored Sierra for a third time on the night. Mora waved off the contest without a count, giving Berlanga (16-0, 16KOs) his 16th consecutive 1st round knockout in as many pro fights.

The latest came without the services of Andre Rozier, Berlanga’s head trainer who tested positive for COVID-19 and thus was not allowed inside the bubble. It mattered little, as corner advice was not required even with Kay Koroma ready to do so had the fight reached round two.

“I was on the phone with Uncle Dre. He just told me get the work done,” Berlanga told ESPN’s Bernardo Osuna. “Shout out to Coach Kay for helping us out.”

Berlanga picks up his third win of a pandemic-riddled 2020, all coming in this venue. Where his 2021 journey takes him remains to be seen. With any luck, all the way home.

“I would love to fight back home next year, if we can,” Berlanga revealed to BoxingScene.com. “I’m from Brooklyn, I got fans from my hometown all the way to Puerto Rico. We’d love to bring back boxing to Madison Square Garden on the weekend of the Puerto Rican Day Parade.”

The state of the ongoing coronavirus pandemic will determine whether that will become a reality. No matter where his next fight takes place, the question remains who will be the opponent to force him to see round two.