Chris Colbert beat another Panamanian opponent Saturday night, but this time in much more emphatic, entertaining fashion than in his previous appearance.

Brooklyn’s Colbert traded plenty with a supposedly superior puncher, dropped Jaime Arboleda four times and stopped his challenger in the 11th round of their 12-round fight for Colbert’s WBA interim super featherweight title. Colbert (15-0, 6 KOs) dropped Arboleda (16-2, 13 KOs) once in the ninth round and three times in the 11th, when referee Steve Willis stopped the main of Showtime’s three-bout broadcast from Mohegan Sun Arena in Uncasville, Connecticut.

The official time of the stoppage was 1:37 of the 11th round, as Arboleda was going down for the fourth time overall. 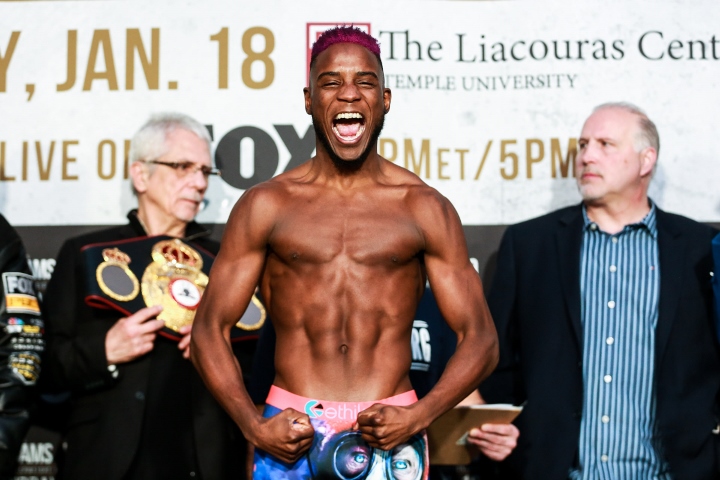 The 24-year-old Colbert was ahead by the same score, 98-90, on the cards of judges Glenn Feldman, John McKaie and Steve Weisfeld entering the 11th round.

Colbert was way ahead entering the championship rounds, but he wanted to win more impressively than when he topped Panama’s Jezzrel Corrales (23-4, 9 KOs, 1 NC) to win the WBA’s interim 130-pound crown by 12-round unanimous decision January 18 in Philadelphia.

“I saw that he said he was gonna be the bull in this fight, so I had to show him what a real bull does,” Colbert said. “In Brooklyn, we don’t run.”

Arboleda got up in time again, but he didn’t last much longer.

Colbert unloaded a barrage of power punches on him, as Arboleda backed against the ropes. Willis had seen enough by then, and he stepped between them to stop the fight as Arboleda was going down for the third time in the 11th round.

“I knew that he was gonna be slower and throw wide shots,” Colbert said. “I knew if I threw in between his shots, then I’d be able to clip him. I followed my game plan and got him out of there. … I came to show the 130-pound division that I can punch. I’m here and I’m here to stay.”

After flooring Arboleda late in the ninth round, Colbert was the aggressor throughout the 10th round. He landed two hard right hands in the final 35 seconds of that round that made Arboleda retreat.

Colbert came forward, with his head down, early in the ninth round. Colbert’s right-left combination to the head nailed Arboleda with 1:10 to go in the ninth.

Just seven seconds later, Colbert drilled Arboleda with a straight right hand that backed him into the ropes.

Arboleda went down for the fourth time in his career, but the bell saved him from further damage.

Colbert blasted Arboleda with a right-left combination below the belt that dropped Arboleda to his gloves and knees a minute into the eighth round. Arboleda only took a brief break to recover before the action resumed.

Willis deducted a point from Colbert for that foul, though.

Arboleda landed a left hook just after the midway mark of the seventh round. Colbert caught Arboleda with a right hand to his chest and then a left hook to his head with just over a minute to go in the seventh.

Colbert went to the canvas with 23 seconds left in the seventh round, but Arboleda pushed him down.

Colbert connected with a left to Arboleda’s body around the halfway point of the sixth round.

Colbert boxed out of a southpaw stance for most of the fifth round. He also avoided trading with Arboleda during that round, even as Arboleda pressured him.

Colbert backed into a corner and covered up after the halfway point of the fourth round. Colbert connected with a straight right hand with 30 seconds on the clock in the fourth round and waved Arboleda forward.

Arboleda and Colbert traded hard shots on the inside with just under 30 seconds left in the third round. By then, they had produced plenty of action in an entertaining fight.

Colbert blasted Arboleda with a seven-punch combination barely a minute into their fight. Colbert turned southpaw soon thereafter, but quickly went back to a conventional stance.

A left-right combination by Colbert landed with just over 30 seconds to go in the opening round.

Though not considered the puncher in their fight, Colbert frequently landed the flusher punches in those first three minutes.