The Panamanian contender just doesn’t think Colbert is anywhere near as “rough” or “tough” as Jayson Velez. Arboleda battled Velez in what evolved into a highly competitive dogfight February 8, when Arboleda survived a 12th-round knockdown and won their WBA elimination match by split decision at PPL Center in Allentown, Pennsylvania.

“I don’t believe that Chris has the firepower to do anything he says he can do,” Arboleda told BoxingScene.com through a translator. “His arrogance and overconfidence is gonna lead to his downfall. I’ll use it against him. He’s not as strong as Velez. He’s not as rough and tough as Velez. He may not be able to withstand what Velez was able to withstand with me. He can say what he wants. He’s got to prove it Saturday night. It’s a lot easier said than done.” 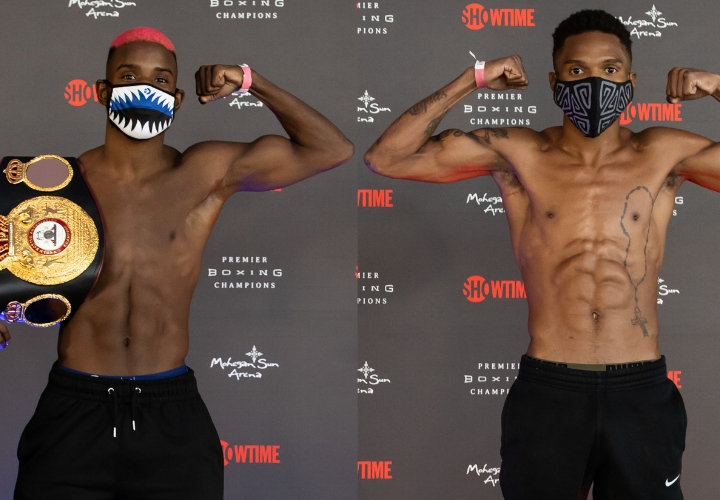 The 24-year-old Colbert beat another opponent from Panama, Jezzrel Corrales, in this last bout to win the WBA interim super featherweight title. All three judges scored that fight for Colbert by big margins over Corrales (23-4, 9 KOs, 1 NC) on January 18 at Temple University’s Liacouras Center in Philadelphia.

“He’s not a big puncher, but that doesn’t necessarily take anything away from him,” Arboleda said. “But with that being said, Saturday night I’m going to put him to a test and see if he can come out the other end. I don’t feel he’s been tested in the way I have been in my last fight with Velez. That fight was a rough and tough gamble, and I came out the victor. I learned things from that fight and I’ve corrected the mistakes I made. Fast forward 10 months later, and it’s potentially a bad scenario for Chris on Saturday night.”

Herman Caicedo, Arboleda’s trainer, wants his 26-year-old challenger to stick to their game plan when he encounters Colbert. Accommodating Velez (29-7-1, 21 KOs) in a toe-to-toe battle made their fight harder for Arboleda than necessary, according to Caicedo.

“What we’ve chosen to correct for this fight is to fight our fight and not necessarily get sucked into someone else’s fight,” Caicedo said. “It’s going to be a battle of who can fight their fight and who sucks who into what. I think they match up pretty evenly on paper. I think where they differ is in their styles – meaning that Chris is much more of a boxer and Jaime is much more of a boxer-puncher, because he can box very well, also.

“So, I think it’s just going to come down to who can put who into the other’s style faster, and then if, in fact, that does happen, then it’s just a matter of avoiding Jaime’s punch for 12 rounds. Because if he hits you, he’s just gotta hit you one time and you’re gonna go.”