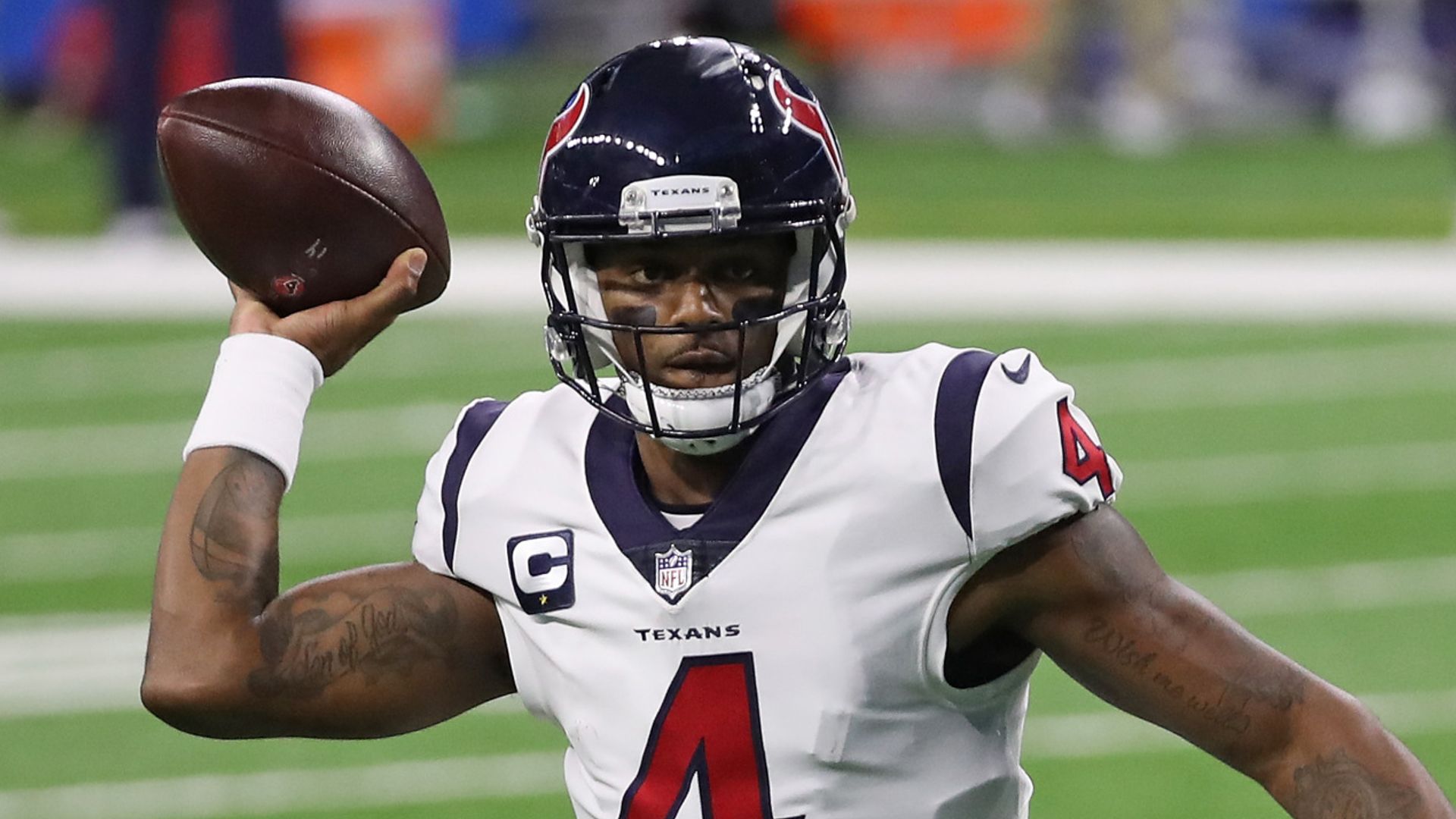 Deshaun Watson finished 17 of 25 for 318 yards and four touchdowns as the Houston Texans dominated the Detroit Lions on Thanksgiving, with wide receiver Will Fuller making six catches for 171 yards and two scores

Deshaun Watson threw for 318 yards and four touchdowns in his sixth straight game without an interception to lead the Houston Texans to a dominant 41-25 victory over the Detroit Lions in a penalty-ridden Thanksgiving contest.

Will Fuller had a mammoth day with six catches for 171 yards and two touchdowns as the Texans pulled away in the second half after an opening two quarters marred by 10 penalties (out of 14 in total) and four turnovers.

Matthew Stafford finished 28 of 42 for 295 yards, one touchdown and one interception to level Tony Romo’s record for most Thanksgiving touchdown passes with 18, surpassing Joe Montana on the list of all-time touchdown passes in the process.

Adrian Peterson pounded away on the ground for Detroit with 55 yards for two scores while carrying the workload in the absence of rookie D’Andre Swift, who was ruled out after nursing a concussion in the build-up to the game.

Peterson bundled over from one yard out for the 114th rushing touchdown of his career to give the Lions an early lead after Stafford had connected with tight end T.J. Hockenson for 51 yards on a double flea-flicker play.

J.J. Watt delivered an immediate response as he caught his own knock down from Stafford’s pass and ran it back for a 19-yard touchdown, only for Kaʻimi Fairbairn to miss the extra point.

Jonathan Williams fumbled for the Lions on the first play of the ensuing drive, with Bradley Roby’s recovery helping set up Watson’s two-yard touchdown pass to CJ Prosise.

The Texans then recovered Kerryon Johnson’s fumble for their third takeaway in eight snaps, before Jamie Collins pounced on a Prosise fumble on the next play, Detroit capitalising this time through another one-yard touchdown run from Peterson.

Watson went deep to Duke Johnson with a 33-yard go-ahead strike on the following drive, but then saw Jordan Akins drop a would-be touchdown to bolster the lead as the Texans were forced to settle for a 42-yard Fairbairn field goal.

Matt Prater’s 29-yard field goal cut the Texans’ lead to six on the Lions’ 14-play drive to open the second half, from which Houston marched downfield to restore their two-score advantage with a 26-yard Fairbairn kick.

The Texans extended their lead to 17 when Watson dropped a 40-yard dime into the path of Fuller on a go-route before sending Keke Coutee into the end zone with a shovel pass on the two-point conversion.

Detroit’s response was foiled when Peterson was stuffed on fourth-and-one, the game leaning further in Houston’s favour on the next play when Watson linked up with a wide-open Fuller yet again for a 34-yard score.

Stafford kept the hosts alive with a glorious side-arm floater to Mohamed Sanu for a 14-yard touchdown late in the fourth, and went to the veteran receiver again to convert the two-point attempt.

But it was too little too late as the Texans saw out the job to give interim head coach Romeo Crennel his fourth win in the role.