It seems Jamel Herring gets his wildcard to defend his WBO world title against Carl Frampton next. Top Rank promoter Bob Arum told BoxingScene.com the bout could take place in January in the UK.

The official announcement of Herring-Frampton, however, would highly question the credibility of the World Boxing Organization, that released a letter back in August that said Herring needs to take care of his mandatory defense against Shakur Stevenson by late January 2021.

Herring (22-2, 10 KOs) last fought in September when he beat Jonathan Oquendo by eighth-round disqualification in a dirty bout at ‘The Bubble’ at MGM Grand in Las Vegas. 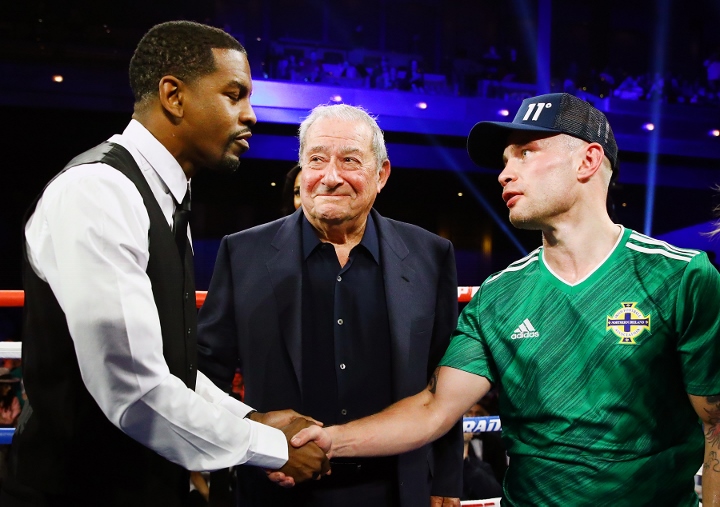 Stevenson (14-0, 8 KOs), who sits at the No. 1 position on the latest WBO ranking at 130 pounds, will get back to the ring on December 12th when he takes on Toka Kahn Clary at the same venue in Las Vegas.

The situation frustrates a number of contenders on the rankings, including No. 3-rated Jeremiah Nakathila, who would like to get his shot at the title in the foreseeable future. Nakathila (20-1, 16 KOs) has been rated in the top 3 of the WBO ranks for over two years.

“It is very clear that this ‘Herring must face his mandatory by January’ [kind of talking] was just a farce and a distraction. The fight between Herring and Frampton was discussed long before his voluntary defense [against Oquendo] and they all knew that it would happen. What is disappointing is that the WBO is playing along and allowing some promoters to do as they please. Their rules also apply to some promoters and fighters. This is where boxing politics become very discouraging,” said Nakathila’s promoter, Nestor Tobias to BoxingScene.com recently.

The Namibian businessman clearly refers to the fact that both Herring, Frampton, and Stevenson are promoted by Top Rank that plans to match its own fighters against each other.

“We are extremely disappointed that money and power play a role in the sport of boxing. We would of course have understood if this was done to make way for a unified fight, but this is a normal fight. Frampton is rated number four and like anybody else, he must earn his title fight, but it looks like some fighters are more equal than others and that is the message the WBO will be sending for allowing this, and it is simply not fair on the other boxers who have worked hard and waiting on their opportunity. This is all just a ploy to control this division by one promoter and the sanctioning body is allowing this,” stated a frustrated Tobias.

BoxingScene.com reached out to the WBO for answers regarding the issue and has yet to get a reply. Team Nakathila is hoping for a positive response on the matter.

“We have worked with the WBO for many years and never have we felt such an injustice but we won’t be deterred by their actions because you can never stop a real champion from taking his place, you can delay it but never stop it,” concluded the promoter.