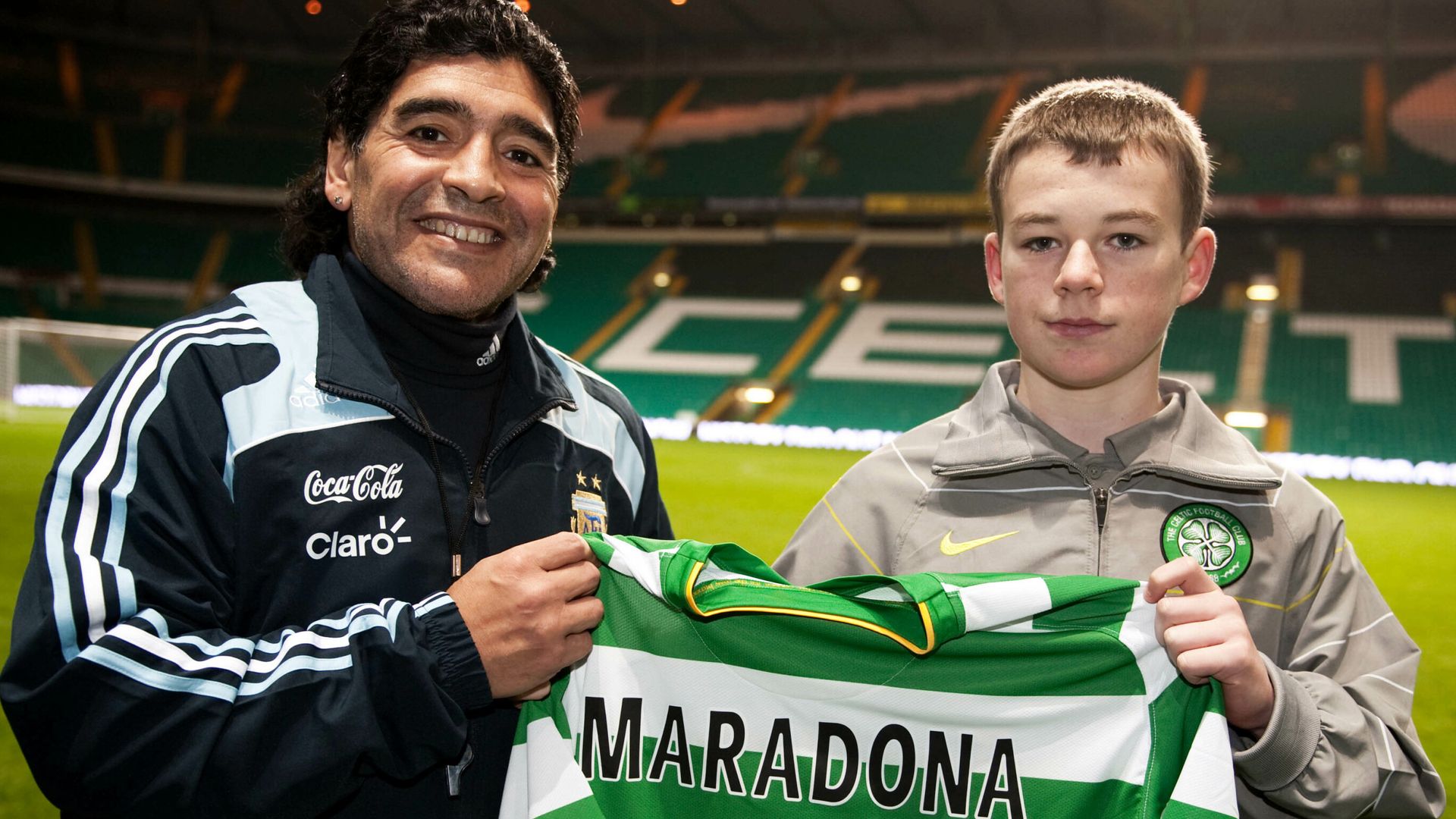 It was in Glasgow where a teenage Diego Armando Maradona announced his arrival on the international scene, scoring his first goal for Argentina at Hampden Park in 1979.

By the time he returned 29 years later to take charge of his country for the first time in Scotland’s largest city, he left his mark on another teenager.

Adam Brown, now playing with Scottish Championship team Alloa Athletic, was a Celtic youth player in 2008. His age group had been selected to ball boy for the Argentinians during a Celtic Park training session the night before the match.

“I was 13 when I got to ball boy for the Argentina team,” Brown told Sky Sports News. “There was 10 of us picked. The players on show that night was incredible like Maxi Rodriguez, Javier Mascherano, Carlos Tevez and Sergio Aguero, although Lionel Messi wasn’t there.”

During the training session, the new Argentina manager was alerted to a missing piece of jewellery by one of his players.

“Fernando Gago chested a ball in training and snapped his medallion off his necklace, so Maradona immediately stopped training, sent the players up the tunnel and we were told to search for the medallion,” Brown said.

“We were in a strict straight line. We brushed one side of the pitch then turned and did the other side. I switched places with a friend as he was talking to the person on the left, so I told him to go to my left and I would go to the right.”

That decision would lead to Brown receiving the attention of the world’s media and a footballing legend just moments later.

“Two steps on and sure enough, I could see something shining in the grass,” he said. “I picked it up and it was the medallion.

“I asked the groundsman if this is what they were looking for. Maradona came rushing over saying ‘thank you, thank you’ and was calling me his friend. Then he lifted me up in front of all the cameras. I was a shy lad then and I was a bit mortified, I didn’t know what was going on. It was crazy.”

The World Cup winner wanted to reward Brown for his find and gave him some mementoes that still take pride of place at home.

“He gave me his hat and gloves. I still have them,” he said. “I got to present him a Celtic top as he was visiting Celtic Park. Celtic allowed me to do that given what had happened. Then Celtic gifted me my own Celtic top with the number 10 and Maradona on the back.

“He was such a nice man. I didn’t spend a lot of time with him, but he was overjoyed that we had found the medallion. He only had good words to say.”

Brown admits that he did not fully appreciate his brief encounter with one of the world’s greatest ever players.

He said: “I think I was too young. As I got older, it dawns on you how much of a legend he was. At the time I was shocked at what was going on. I was more in awe of the players on the pitch but, looking back on it now, I realise how much of a hero he was.”

After the news of the Argentine’s death broke on Wednesday, Brown has been asked to recall his story from that night at Celtic Park.

Brown, now 25, is preparing for Alloa’s League Cup tie with Hearts this weekend, and while saddened at the news of his passing, he can only smile when he recalls the moment in the limelight he shared with Maradona, who called him his friend.

“I am lucky that I was there, and I was the lucky one out of the boys to find the medallion and get some attention out of it,” he said. “It’s an amazing story. Whenever anyone asks me, I tell them in a heartbeat.

“I was not really smiling in the photos. I wish I had a smile on my face, but I can look back on that and it will always be with me. We were all aspiring to be this legend of football when we were young.

“I can look back on the photos and footage and say I had met the greatest footballer of all time.”