Demetrius Andrade’s first fight since January 30 had been scheduled for Friday night in Hollywood, Florida.

The unbeaten WBO middleweight champion’s layoff was prolonged once his optional opponent, Dusty Hernandez-Harrison, contracted COVID-19 and withdrew from their scheduled 12-round fight on the Daniel Jacobs-Gabe Rosado undercard. Eddie Hearn, Andrade’s promoter, now anticipates Andrade (29-0, 18 KOs) will return to the ring in February to make his mandated championship defense against England’s Liam Williams.

Hearn expects an Andrade-Williams fight to headline a card DAZN would stream from an undetermined venue in Andrade’s hometown of Providence, Rhode Island.

“So, he was due to fight Dusty Harrison,” Hearn explained during a virtual conference call Tuesday to promote the Jacobs-Rosado card. “He got COVID. We looked at some replacements for Demetrius. And to be honest, he just said, ‘Look, I just wanna be in big fights now and great fights.’ So, you know, he’s looking for that standout fight. He wants the Billy Joe Saunders fight. And I think if Billy Joe Saunders doesn’t get Canelo Alvarez in May, it will be Andrade against Saunders, probably up at 168.

“But he also has a mandatory [defense] against Liam Williams. So, that’s who he will fight next, Liam Williams, subject to Andrade landing a major fight. And that will be in February, hopefully with crowds back in Providence.” 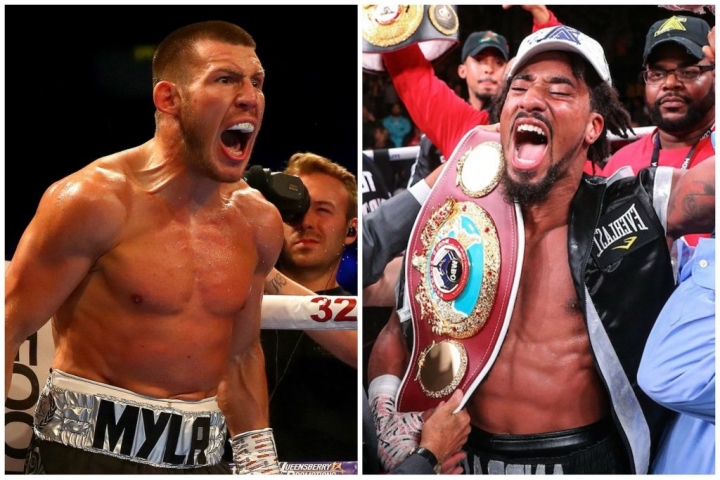 Williams (23-2-1, 18 KOs) knocked out Andrew Robinson (24-5-1, 7 KOs) in the first round of his most recent fight, October 10 in Stratford, England. The 28-year-old Williams, the WBO’s number two-ranked challenger for Andrade’s 160-pound championship, has won seven consecutive bouts by knockout or technical knockout since losing a 12-round majority decision to countryman Liam Smith (29-2-1, 16 KOs) in November 2017 in Newcastle, England.

In Andrade’s most recent bout, the skillful southpaw stopped Irish underdog Luke Keeler (17-3-1, 5 KOs) in the ninth round January 30 in Miami.

England’s Saunders (29-0, 14 KOs) is set to make the second defense of his WBO super middleweight title December 4. He’ll encounter another Brit, Martin Murray (39-5-1, 17 KOs), in a 12-round main event DAZN will stream from Wembley Arena in London.

Saunders was supposed to make a mandatory defense of the WBO middleweight crown against Andrade in October 2018 at TD Garden in Boston.

The Massachusetts State Athletic Commission denied Saunders’ request for a boxing license prior to that bout once he tested positive for a banned substance. The WBO later stripped Saunders of that championship.

Andrade instead out-pointed Namibia’s Walter Kautondokwa (18-2, 17 KOs) by unanimous decision in their 12-rounder to win the then-vacant WBO middleweight title. The 2008 U.S. Olympian has since defended that title three times.