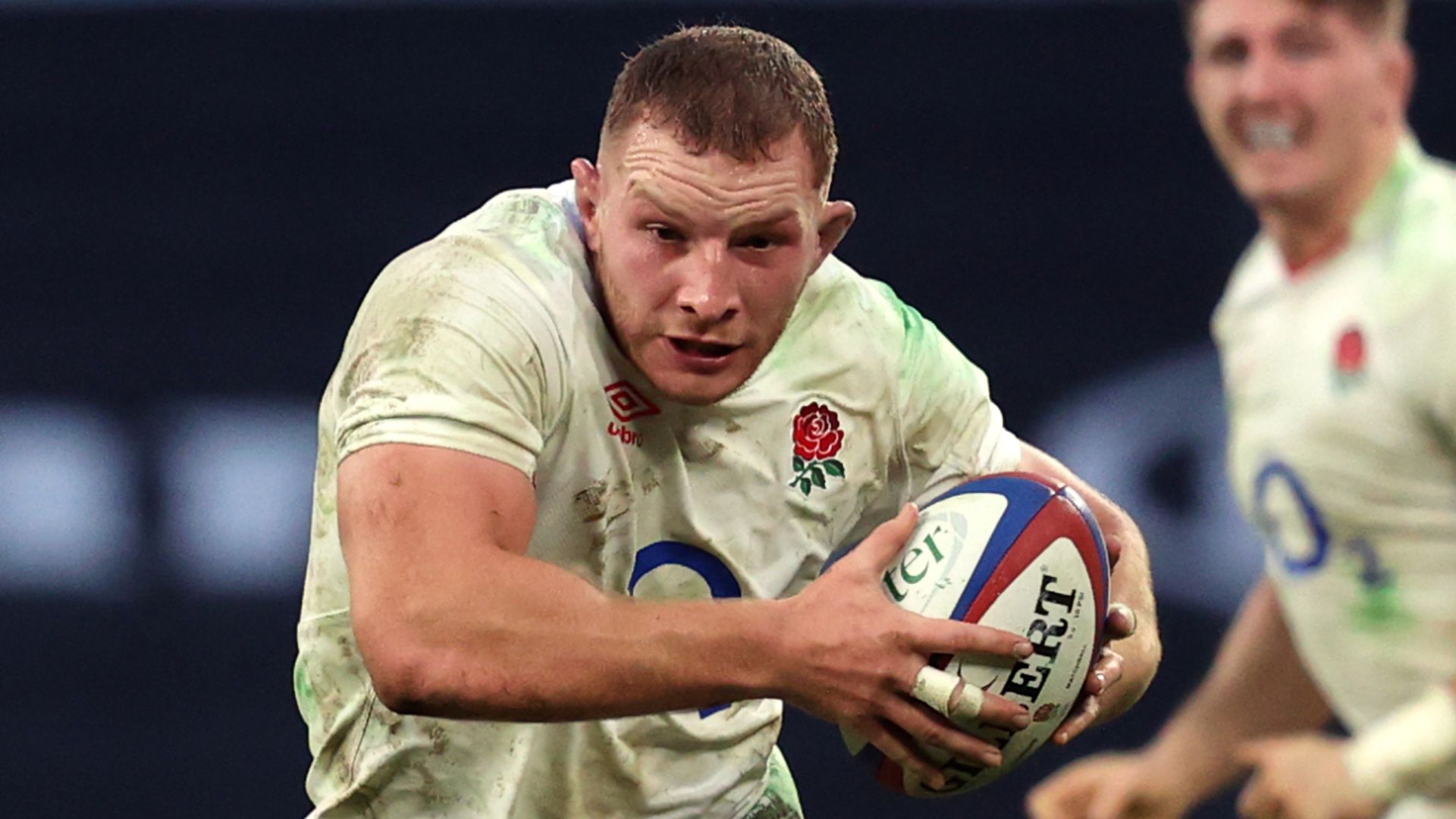 Eddie Jones’ England well-represented following their comprehensive win over Ireland; France and Wales represented too for Nations Cup wins over Scotland and Georgia respectively, as are Pumas and Wallabies after their Tri-Nations draw and Red Roses, who beat France

We pick the standout players from the weekend as England, France and Wales won in the Autumn Nations Cup, the Premiership returned, the Pumas and Wallabies drew and Red Roses won again…

At full-back this week, we’ve gone for the Red Roses’ Kildunne after her vital intervention in their late 25-23 victory over France at Twickenham.

The exciting Wasps back recovered from being stepped by France wing Cyrielle Banet in the first half, to put in a super display which culminated in a sensational try with seven minutes to play, stepping one defender before breaking through three tackles to score.

That try gave the Red Roses a shot at winning the game at the last, which Emily Scarratt did via a penalty with the final kick of the Test.

Ahead of facing Ireland at Twickenham, England wing May hadn’t registered a try for his country in five Tests, dating back to February this year.

On Saturday, he scored two magnificent efforts as England proved too strong for Andy Farrell’s visitors: terrifically leaping above Hugo Keenan to claim a high ball and score his first, before countering from his own 22 to register a sensational second.

For that crucial second try, May stepped past Chris Farrell before outsprinting all other Ireland chasers, kicking on twice and dotting down. The 30-year-old also carved out 53 metres in attack – the most in the Test – beat five defenders, made two clean breaks, seven carries and contributed five tackles in the 18-7 victory.

France took charge of Autumn Nations Cup Group B on Sunday, as they travelled to Murrayfield and earned a 22-15 victory over Scotland.

Centre Vakatawa was their brightest spark on a day when Les Bleus weren’t at their best and failed to convert a host of chances.

The midfielder made 83 metres in attack – the most of anyone in France colours – nine carries, beat four defenders and scored the vital try of the Test, supporting a line-break before finishing extremely strongly.

Faced with an Argentina outfit in the Tri-Nations on Saturday buoyed by their historic victory over the All Blacks, the Wallabies knew they would have to take it to the Pumas.

In 22-year-old centre Paisami, they did just that. The hard-running midfielder showed up for nine carries – only three players made more – beat an impressive three defenders, earned 39 metres in attack and chipped in with six tackles during the 15-15 draw.

On the occasion of his first ever Test start for Wales, Gloucester wing Rees-Zammit put in a performance to be proud of as Wayne Pivac’s side finally arrested a slide of six straight losses courtesy of an 18-0 win over minnows Georgia.

The 19-year-old wing made 62 metres with ball in hand – more than any other Wales player – off seven carries, beat four defenders, carved two clean breaks and scored his first Test try, going over in the corner. He’s a serious talent.

In a week where not many 10s stood out with exceptional displays, we’ve gone for Argentina’s Sanchez for the second week in a row after another measured performance of quality.

With the Pumas realistically in the hunt for a Tri-Nations/Rugby Championship title for the first time in history, Sanchez was crucial as Argentina came from 15-6 behind to draw late on with the Wallabies in Newcastle.

The playmaker held his nerve to land five of his six efforts off the tee in the 15-15 Test, while also creating 21 metres with the ball in hand while attacking.

A host of uncertainty has surrounded the Leicester Tigers in recent times. Indeed, six players, including Manu Tuilagi, departed their contracts during Covid-19, they avoided Premiership relegation only due to Saracens’ points deduction and, most recently, there was the dismissal of coach Geordan Murphy.

Many feared for them going into the new campaign, yet in 37-year-old scrum-half Wigglesworth, they signed somebody to steady the ship on the pitch, and the former Saracen did just that on Saturday with a wonderful display in Leicester’s surprise 38-15 opening day victory.

In an all-action 76-minute outing, the veteran was sensational as he controlled proceedings and added a super try.

Back in the starting England team for the visit of Ireland, Vunipola put in a phenomenal display at loosehead prop.

As part of a pack which worked incredibly hard at Twickenham, Vunipola made some 15 tackles (missing none), and formed a front-row which had he edge at the scrum all day.

Among all the Test action this weekend, one of the finest performances came from Benetton hooker Faiva in the PRO14 against the Ospreys.

The New Zealand-born forward was exceptional for the Italian outfit as he scored a hat-trick to push Benetton out to a 22-10 lead when he departed the park after 64 minutes.

Two late converted tries from the Ospreys agonisingly denied Benetton, but can take nothing away from Faiva, who in addition to his treble of tries, made nine tackles, nine carries and three turnovers!

Kyle Sinckler was immense for England, but for his role in a Test Wales simply could not afford to lose, Lee earns out tighthead spot.

If there was one area Georgia were going to come after Wales, it would be the scrum, but the Scarlets man ensured the visitors to Llanelli gained no advantage in that area, and were actually driven back repeatedly.

Lee and the Wales front-row crucially forced five scrum penalties in the Test, including one against the head.

One of the most consistent performers in world rugby at the moment, England lock Itoje was outstanding again on Saturday, claiming the man of the match award.

The second row was a key leader among a defensive masterclass, making an enormous 20 tackles, while also marshalling a lineout which, in many ways, was the beating of Ireland.

Itoje claimed six lineout balls and made a further steal, while Ireland were pressured into a malfunctioning set-piece which gave them little chance of success in the match.

Our second Puma this week, Argentina second row Petti continues to be one of the most underrated players in world rugby.

Up against the Wallabies, he was once again influential in a host of aspects on Saturday. Petti made eight tackles, five carries, one turnover, two lineout steals, beat one defender and gave up zero penalties in a super display.

Are there a better pair of flankers in world rugby at the moment than England’s Curry and Underhill? The two were sensational on Saturday.

Both are hugely physical, have stamina of the highest order and – most critically – dominate the breakdown area. Curry made 19 tackles, five carries and beat a defender in the win. He also made one turnover, and disrupted Ireland ball all day.

Allied to the above, there is just no way Underhill could be left out for his performance.

The Bath flanker is a machine on the rugby pitch, and on Saturday he made 16 tackles while hassling and harrying Ireland seemingly at every inch of Twickenham.

Like Curry, he is also credited with one turnover, but was a breakdown menace.

Our third back-row this week is another Englishman, but one who can’t actually get into the squad at the moment in No 8 Simmonds.

Despite being a Premiership and European Cup winner with Exeter, Simmonds continues to be overlooked by Eddie Jones – though he would have been hard to ignore on Friday night.

The Chiefs man was brilliant, scoring a hat-trick away to Harlequins as the 2020/21 Premiership season kicked off with a 33-3 win for Exeter at the Stoop.

Simmonds also made 78 metres, 13 carries, seven tackles, one turnover, one clean break, beat two defenders and claimed three lineouts. Have England ever had as much strength in depth at back-row?