“It’s funny, I told my friend, ‘Ah man, I feel I’m in this box,’, said former undisputed world heavyweight champion Lennox Lewis. “And my friend looked at me and said, ‘Lennox, climb out of the box…’ And I was like, ‘You’re right, I need to climb out of the box’. So something simple has helped me but before I was in a mess.”

Lewis has always come across as stoic, resolute and pragmatic but he admits he’s faced adversity and survived hardship. He grew up away from his mother in Canada, his daughter was born with Trisomy 18, a rare but very serious condition, and that’s even before you look at his career – written off after heavy knockouts, nearly frozen out of the title picture and while he also come through his share of court battles, he’s never let on that the world has got on top of him, that he’s struggled – but he has.

“It’s staying positive,” he said of how he has faced up to it. “I’m a positive person and I like to stay positive and I like positive people around me. I think that’s important. Then, I don’t look at a bad situation as bad, I say ‘What can I learn from it and what can I take from this situation?’ And if it’s really bad, do not let it happen again. You’ve [also] got to have a strong family bond because me and my mother were really strong together with our bond, she elected to cook for me in my training camp and she’d say, ‘I’m coming too’. And I’d say, ‘You don’t have to come’ and she said, ‘No, I want to make sure you’re eating right and your clothes are taken care of’. Then, having the people I had around me, and when I turned pro I came back [to Canada] and found Courtney Shand because I needed him to help me with my physical education and making sure I was physically right and these are the people I made sure were in my life, people I can trust, who have loyalty and who I’ve been with a while.” 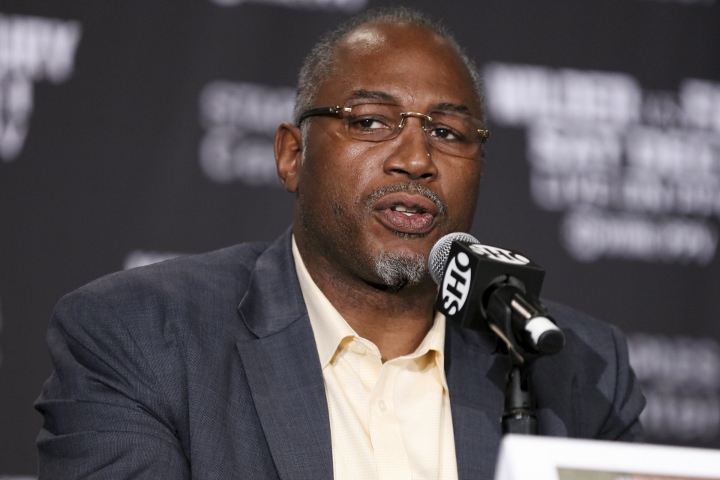 One of the present heavyweight champs, Tyson Fury, has become a mental health advocate since confronting his own demons. Lennox was the king in an era when admission to it was more unspoken than it is today.

“It was to a certain degree,” he admitted. “The reason people look at it as a taboo is people don’t really understand it, and once you understand it and that people have mental issues and issues you need some education on it, and once you get that education you’ll have a better understanding of it, and that’s what happened with me. I think all athletes go through that, even before they lose, even going through training, even going through life and I grew up in the sense we don’t talk about it, we just get on with it. It was interesting that other boxers were open about there their mental health issues for me and even for me, I wouldn’t look as myself having mental health issues…”

Then he found himself ‘in a box.’

It can touch us all. Even kings.

In a new documentary about his life, Lennox talks about his difficult childhood and his daughter’s medical condition. He discusses his career and it’s also an opportunity to give a shoutout to members of the team who created a suit of armour around the champ, keeping his circle small and tight. Yes, Emanuel Steward and Kellie Maloney made a lot of headlines but Harold Knight and the aforementioned Shand witnessed him both thrive and struggle, the successes and the lessons.

“People don’t realise the relationship, even with me and Courtney…” said Lennox. “We’ve been friends since we were 14, we’ve been on mini-football league together, we were in high school together and the trust and loyalty we have has lasted a lifetime.”

Shand and Knight were an integral part of a story that is narrated by music overlord Dr Dre.

“Dr Dre is a great guy,” stated Lennox. “He’s a professional, a perfectionist and he doesn’t get involved with things unless it’s a good project, so I was very happy when we asked him to be involved and he said yes. I’ve always liked his music, I’ve always liked him but doing my documentary gave me time to meet the guy, speak to him, and everything I thought about the guy came true. It’s mind-boggling how he looks at certain things, I can speak to him all day – and he can play chess as well!”

Lewis is a well-documented chess enthusiast but the documentary, of course, covers his battles in the ring as well as the fun and games and everything in between outside the ropes.

“It gives a brief look at my life and my career, especially in boxing, and there’s a lot of things people didn’t know and haven’t seen, so I was very happy with that aspect,” he continued. “I’m sure there are movies down the line where we can bring out other stuff and highlight them even more. There’s so much you could [have] put in. It depends on what you really want to focus on. We could make a whole story about me and Frank Bruno, even me and Gary Mason, but there’s only so much you can put in…”

Of course, there’s plenty of Mike Tyson and Evander Holyfield content in there, too. They arguably gave Lewis his defining nights but the three of them have grown old gracefully and get along well with one another to this day.

“There’s definitely a lot of mutual respect, we give each other respect and when you look at our lives, our lives are similar and we’ve got similar backgrounds, poor backgrounds, maybe from one parent, maybe from no parents and this is how we’ve moved through life, our profession and these are the people that we are,” he said of himself, Tyson and Holyfield. “When you look at Mike Tyson in this documentary, a lot of people will look at his life and my life and see that we’ve had similar lives to a certain degree and we’ve turned out differently.”

Did he ever wonder that there’d be a time in his career when the three of them wouldn’t get on?

“I was concerned about Tyson for a little bit,” he smiled. “I saw him going off the deep end a little bit and I was wondering what was happening and thinking this was not the man that I met or the kid that I met when we were younger [they trained as youngsters together in Catskill], but when we finally met up that all went away.”

And while Tyson returns to the ring against Roy Jones in an exhibition this weekend, when Lewis left in 2003 he never looked back.
“I looked at the history of why people come back and I said to myself, ‘These people came back because they had nothing else to do’, he explained. “And when I retired there were a lot of people saying I should come back or go and fight this guy… I looked at a lot of athletes that did this type of thing, like Michael Jordan who went to baseball and then he came into basketball – I watched him, I was a great Michael Jordan fan, and it didn’t seem he had the same thing he left with, and the younger guys are always coming up and you can’t be boxing at the top all the time, there’s going to be younger and hungrier guys that are out there, so even though I retired you’re going to get people saying you should come back or thinking you’re still coming back, but you need to know in yourself if you still want the life or have another life to go to. For me, there are other goals I want to accomplish.”

But it wasn’t that straight forward. He stopped training and he nearly got the taste for it again when he restarted.

“The routine of training camp, it was hard because I started putting on weight and people came up to me and said, ‘Champ, it looks like you’re putting on weight’ and I’d have to say to them, ‘Did you ever see a skinny king?’ But that was from not training anymore. Before I was eating and training. Then I was eating and not training, so I kept the weight. Then, every time I started working out, I’d feel I was training for a fight so I started to play a lot of tennis and play a lot of basketball to keep my weight off and to keep me active.”

Did he miss the thrill of fight night?

“Only when I’d hear the crowd roar,” Lewis stated. “Because I was commentating, I’d go to HBO shows and different places and every time the main event was on the scream of the crowd would remind me, ‘Yeah, I know that sound. I remember that sound’.”

How about the loss of identity, as no longer being the world’s No. 1 heavyweight?

It’s Lewis’s regal way that has made him a standout athlete and role model. He wasn’t above mixing it up in a press conference if he needed to defend himself or get his point across but he fought just about everyone.

“Bowe was the only standout,” he said of the one that got away, but whom he’d beaten in the 1988 Olympics. “There’s guys like Michael Moorer, it’s not that I wanted to fight him, we just didn’t end up fighting. I never fought [Chris] Byrd, and there was a good reason we never fought. He came to a press conference one time and I said you can’t put a lion against a Byrd!”

By that point Lennox had made his name on both sides of the Atlantic. Some would say it was the quick demolition of Andrew Golota. Others might point to the war with Ray Mercer. Lewis feels he’d earned his stripes and respect in the USA by then.

“I think they saw me over in England first, I think it was maybe the Razor Ruddock fight,” he said. “When people saw Ruddock against Tyson they thought he was an animal who could knock you out at any given time but then when they saw me in the ring with him and ‘Boom’, I dismantled him and they were like, ‘Who is this guy?’ Riddick Bowe knew who I was because he decided to put the belt in the garbage…”

And certainly by the end Lewis had earned just about every possible accolade, respected by world leaders like Nelson Mandela and asked to be Muhammad Ali’s pallbearer at his funeral. What did great men see in Lewis that meant they wanted to be involved with him? It wasn’t just that he could fight.

“Wow, I don’t know,” he said, blushing at the question. “I guess it’s just me. Just something about me. I don’t know.”