The two boxers were scheduled to fight each other on December 12, but the contest was pushed back after Fa, 31, was pulled from the fight due to abnormalities that were found in his blood.

Far will undergo surgery, with four weeks of rehab being planned out. 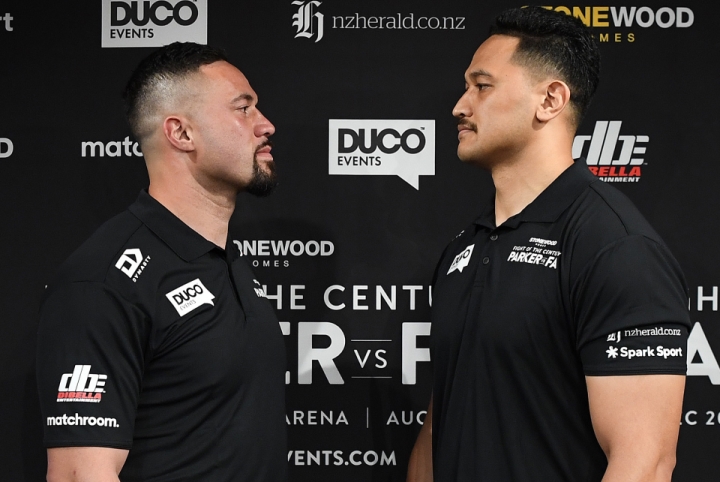 The fight could now be pushed back as late as March.

Bareman has now made claims Parker was not taking the fight seriously, with Parker’s promoter, Dave Higgins, trying to run everything.

“One thing we’ve been reminded of is that this is 100 percent the ‘Higgins Show’,” says Bareman told News Hub. “It’s all cool up here, but it’s a sh-t fight backstage.

“David [Higgins] experienced this when he took Parker to fight [Anthony] Joshua. He had Eddie Hearn on his arse and now he’s paying it back to us, making us work hard for everything. We lose the main advantage we had. They were not taking this fight seriously and you know that because Kevin Barry took his time coming back.

“We were already training for four weeks, before they decided to start. My gym at City Kickboxing, we run these streets. If you’re partying with celebrities or scumbags, we will know about it. These guys are from Vegas, we run the streets. If they are not taking the fight seriously, we will know about it. This is a fight and it’s going to get nasty. I have respect for Joseph and Kevin [Barry]. I like them, but at the same time, stuff those guys – they can kiss my arse.”

“At the age of 24, when he became the fourth-youngest WBO heavyweight champion, we did not take anything for granted,” Barry said.

“We didn’t take any opponent lightly and I can promise, with my hand on my heart, that we are not taking the fight lightly. I can’t control what other people think or say. I can control what I say, I can promise you this is the fight we are taking very, very seriously.

“The stakes couldn’t be higher for us. If we don’t get this fight right, it’s going to be a long time before Joseph gets back in the mix to fight for the world title. Junior is sixth in the world and unbeaten. Joseph is 27 and has fought some of the biggest names in boxing, but at the age of 28, Joe is starting to come into his prime.”