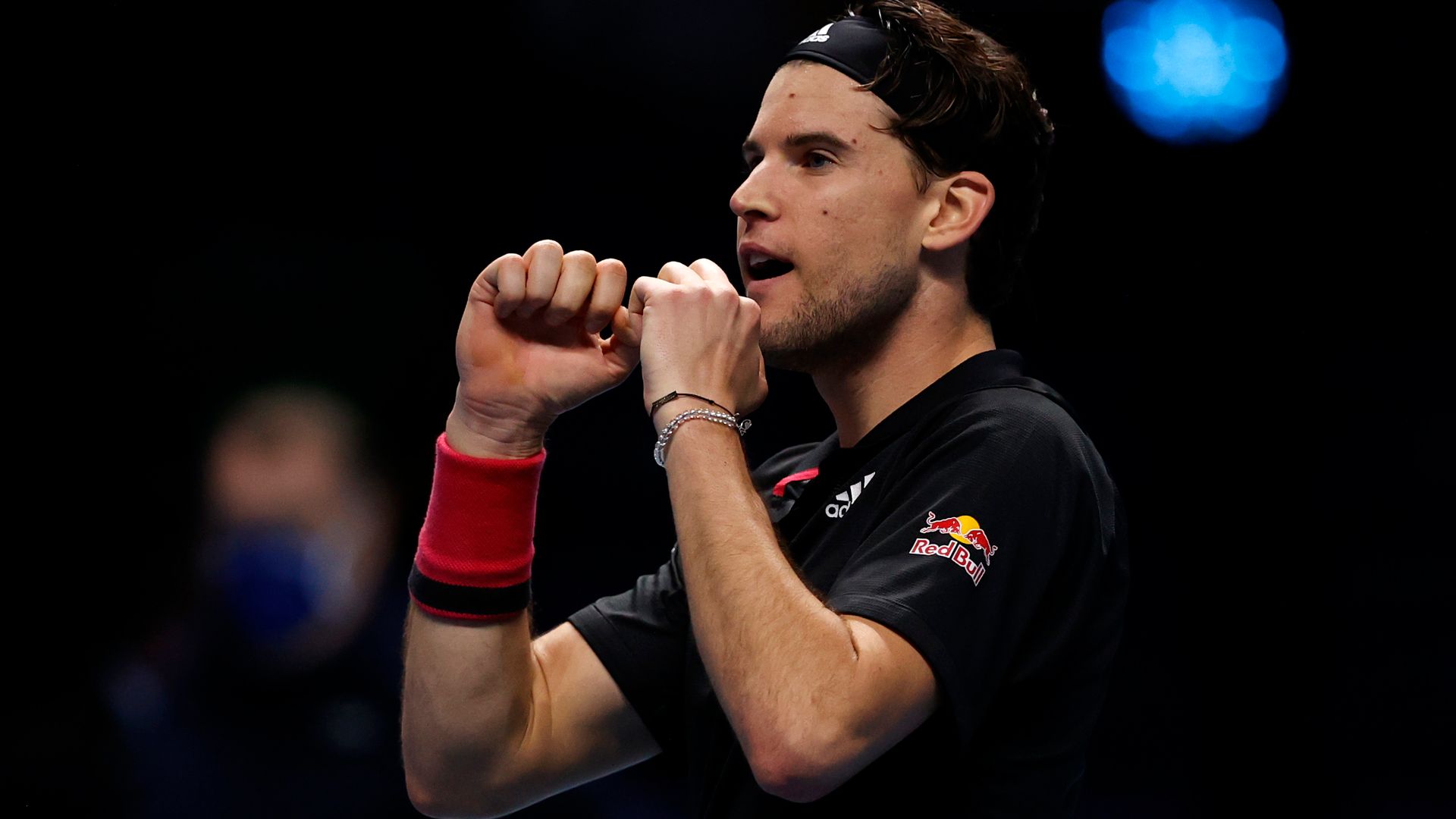 The Austrian’s victory is his 300th on the ATP Tour and means there will be a new Nitto ATP Finals champion; Thiem will meet either Daniil Medvedev or Rafael Nadal in Sunday’s final at The O2 in London

The Austrian secured his semi-final victory the hard way, after the players had spent two hours and 54 minutes on court inside The O2 Arena.

He missed four match points during the second set tie-break and then had to claw his way back from 4-0 down in the final-set tie-break.

Thiem will need to recover as quickly as possible ahead of facing either Rafael Nadal or Daniil Medvedev in Sunday’s final.

“It was for sure a mental battle. I got so tight in the second-set tie-break. To play these legends is always something special, playing for the final here is also something very special,” Thiem said during his on-court interview.

“I thought that after my first big title in New York, maybe I’m going to be a little bit calmer, but that was a mistake, I guess.

“I was just as tight and as nervous as before. It was so much on the edge that match, like every single match here. The best players in the world are facing off.

“So, I’m just incredibly happy to be through and just [will] try to get ready for tomorrow. I’m looking forward to it a lot, it’s going to be the last match of a tough year for everybody. We’re going to try to put on a great show for everyone.”

For Djokovic, the loss marks the end of the road in his quest to equal Roger Federer’s record of six victories at the ATP Finals. After not losing a completed match until the French Open final last month, his season has concluded with a run of four losses in eight matches.

Djokovic was solid, if not spectacular, for the first ten games while Thiem showed his frustration at a lack of precision.

The 11th game gave Thiem his breakthrough, though, as Djokovic unwisely kept coming forward and paid the price, dumping a volley into the net on the first break point of the match.

The world No 1 was criticised in his French Open final hammering by Nadal for overplaying the drop shot, and in London he seemed to have replaced that with the drop-volley.

Thiem confidently served out the first set and Djokovic looked hurried and harassed, as he faced another break point in the fifth game of the second set, but this time his opponent netted a forehand.

This was the latest in a series of close matches played out between these two. Last year at The O2, Thiem won an epic group match, while Djokovic edged a five-set Australian Open final in January.

Djokovic had his first break point of the match at 4-3 but narrowly missed a return, while a couple of errors from Thiem presented his opponent with two set points at 6-5. Once again, one of the greatest returners in the game was unable to get the serve back.

The Serb seemed to be having trouble freeing himself up but he was certainly not the only player feeling the tension in an extraordinary second-set tie-break.

Thiem served a double fault on the second match point and missed a forehand on the third, while a netted backhand on Djokovic’s second set point was the decisive moment.

It was nip and tuck all through the decider as well, but the momentum seemed to be gradually moving Djokovic’s way.

He let out a huge roar of frustration at a missed return at 5-4, 30-30, but that was nothing to the disappointment he must have experienced as Thiem wrestled the tie-break away from him.

Having played four poor points at the beginning, Thiem went for broke and it paid off spectacularly, leaving Djokovic helpless and heading home.

The other semi-final between Medvedev and Nadal takes place at 8pm on Saturday night.