Liam Davies sparkled on his first step up to the big stage as he claimed the vacant English bantamweight title in only his eighth professional fight as Sean Cairns was retired on his stool at the end of six rounds in the show-opener at the SSE Arena, Wembley. 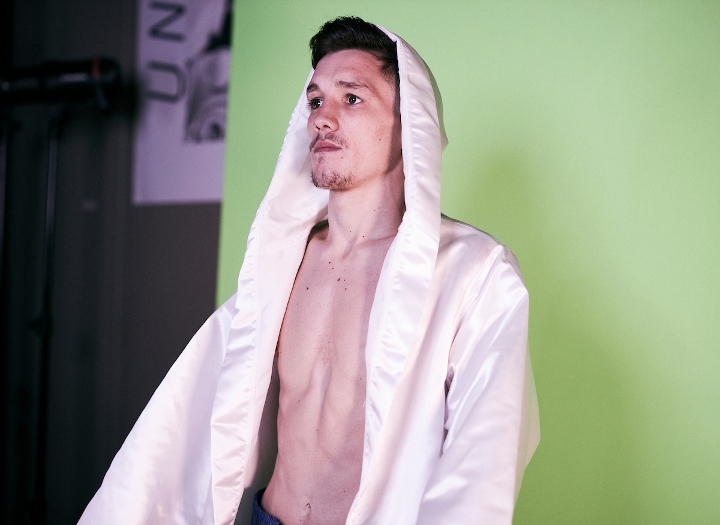 In his first appearance on a major show, Davies, 24, found his feet quickly and showed himself to be a prospect of some note. He dominated the fight, landing with accurate straight rights from the opening bell and then stepping up the pace.

“I thought I boxed well,” Davies said. “I paced myself for the ten rounds. That’s why when I hurt him one or two times I didn’t go mad with it because I knew it was a long fight. I’m going to take this [the English title belt] to my granddad’s grave tomorrow.

“After so many years in boxing I just feel tonight I have shown my worth. I’m proud of myself.

“I’m here to impress and prove myself and I think I have shown who Liam Davies is for everyone watching.

“I want the British title. That’s always been the aim, the European, then the world. The sky is the limit now.”

Davies found Cains with regularity with his straight right from the start. Cairns, 34, endured a tough first round, but found a foothold in the second as he tried to get though with his southpaw left.

He struggled to get Cairns out of his rhythm, though, and the more Cains tired, the more open he was to Davies’s shots. By the fifth round, Davies was so high on confidence that he was walking straight through Cairns, landing three left hooks in a row.

In the sixth, Davies was punching Cairns around the ring and at the end of the round, referee Ian John-Lewis accepted the retirement from Cairns’s corner.

Jez Smith snapped the unbeaten record of Ben Ridings in a hastily arranged middleweight six-rounder. Smith, who had been stopped by Caoimhin Agyarko in July looked the sharper throughout, beating Ridings to the jab and generally proving the busier and more mobile.

Referee Bob Williams scored it 60-54 to Smith, giving him every round.

“I’m going to concentrate in the gym, get down to light-middleweight and whoever wants it can have it,” Smith said.