Trainer of the year Eddy Reynoso will have another busy night pulling off double duty on Dec. 19.

BoxingScene.com has been informed by a source with direct knowledge of the negotiations that WBC flyweight champion Julio Cesar Martinez will serve as the co-feature in the Canelo Alvarez versus Callum Smith card next month on DAZN from the Alamodome in San Antonio, once an opponent is determined and finalized.

The match will mark Martinez’s first return to the ring since the pandemic started. The all-action Martinez (17-1, 13 KOs) was supposed to fight as the main event in Matchroom Boxing’s first show since COVID-19 stalled the sport in August against McWilliams Arroyo but a Martinez throat infection forced a cancellation. 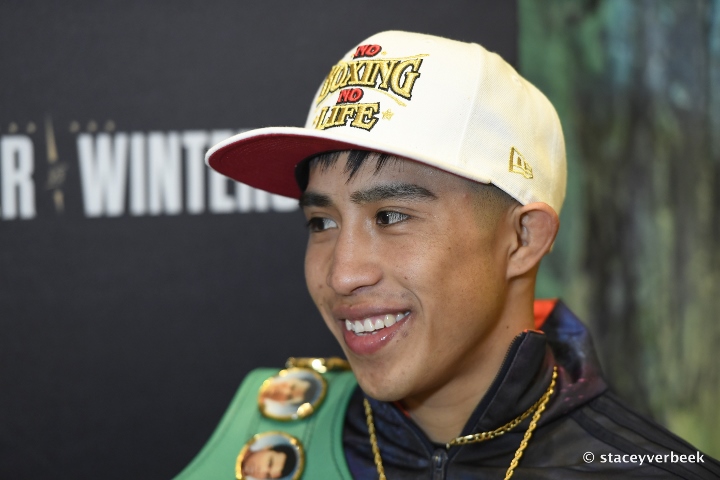 The fast-rising 25-year-old champion will now fight in a chief support role to his stablemate and fellow Mexican countryman Alvarez in what will definitely be in front of a larger audience.

Now that Alvarez is an unrestricted free agent guiding his own career, stablemates who are also trained by Reynoso will have more of a likelihood of fighting alongside their star teammate no matter the promoter or platform.

Reynoso’s cadre of budding boxers include heavyweight contenders Andy Ruiz, Frank Sanchez and WBC super bantamweight titlist Luis Nery, who all fight under the PBC banner on FOX and Showtime.

Oscar Valdez is also trained by the son of Don Chepo and is promoted by Top Rank and fights on ESPN, while Martinez is tied with Matchroom and fights on DAZN.

Ryan Garcia, who fought as the co-feature to Alvarez’s knockout win over Sergey Kovalev last year with a KO of his own over Romero Duno, is likely the odd man out of the co-feature equation for the foreseeable since he’s signed with Golden Boy, the promoter of which Alvarez freed himself from shortly after filing a lawsuit.