The stateside debut of Fernando Molina also served as his deepest fight to date.

Glimpses of brilliance were offered in an otherwise well-rounded performance by the 18-year old lightweight, who outboxed Jose Zaragoza over six rounds. Judges Pat Russell, Gerard White, Zachary Young all had it 60-53 in favor of Molina in their FS1-televised bout Saturday evening from Staples Center in Los Angeles.

Molina crossed the border for the first time in his young career, having scored a pair of knockouts in his first two pro bouts in his native Mexico. Saturday saw the teenaged prospect go the full six-round distance, though remaining true to form every step of the way, 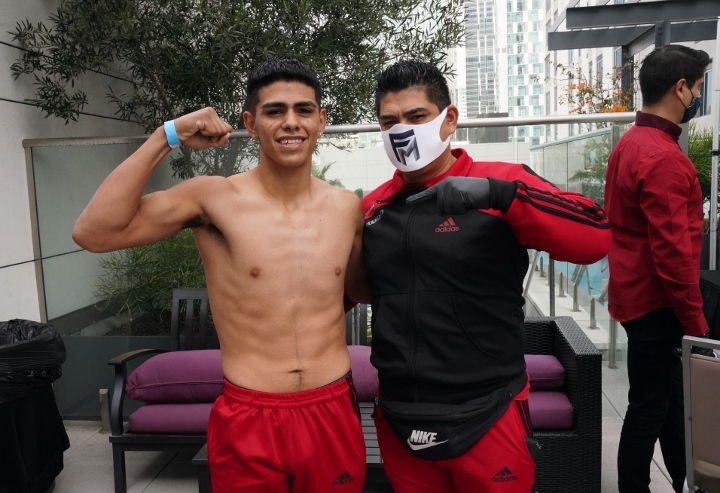 The 32-year old Zaragoza—originally from Jalisco, Mexico who fights out of Sedalia, Missouri—tried to test the heart of his foe but paid the price in round two., Molina planted his feet and whipped a crisp right uppercut which caught Zaragoza flush on the chin for the bout’s lone knockdown.

Molina remained poised, offering lightning-fast hand speed in catching Zaragoza from all angles. Zaragoza kept coming forward, tightening up his defense though unable to land anything of his own with conviction.

Round four marked uncharted territory for Molina, who looked comfortable as he worked his jab and used in-and-out movement to discourage the rhythm of Zaragoza who was unable to fire off his punches.

As it became clear that the fight was heading to the scorecards, Molina dazzled with flashy combinations while not quite committing to his power shots as was the case earlier in the fight. Jabs, slipping right hands and firing back with counter rights of his own were how Molina chose to finish the fight as he advanced to 3-0 (2KOs).