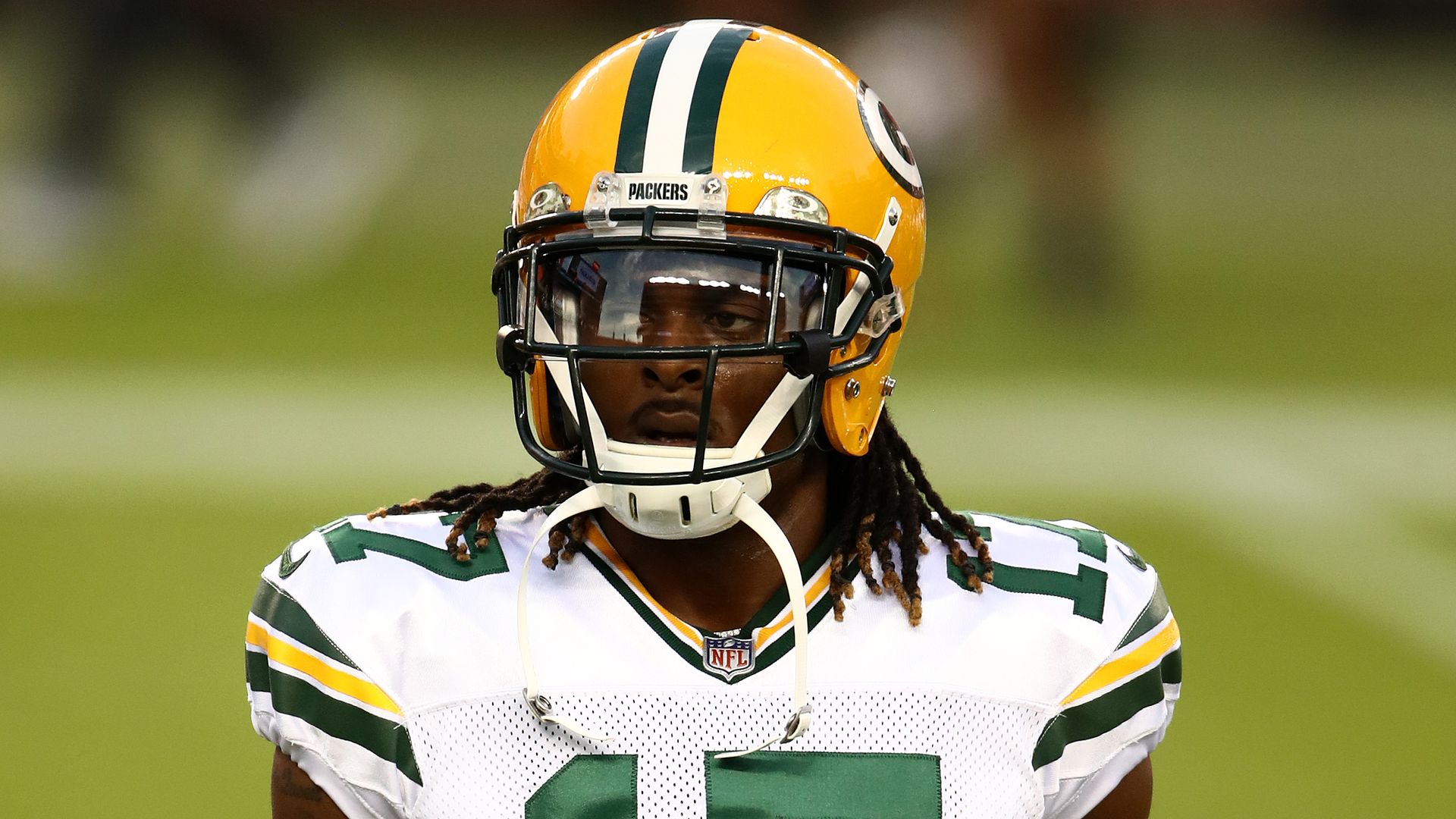 Watch Davante Adams and the Green Bay Packers in action against the Indianapolis Colts (kick-off, 9.25pm) as part of the Sunday night NFL triple-header, live on Sky Sports NFL from 5pm

If Davante Adams is the answer, then what is the question?

Perhaps it’s ‘how will the Green Bay Packers cope with life beyond Jordy Nelson?’, maybe it’s ‘who is the best wide receiver in the NFL?’, it may even be ‘why did the Packers front office not draft a first-round receiver for the first time since 2002 earlier this year?’

One that certainly applies is ‘who leads the NFL in touchdown catches since 2016?’ Adams owns that title with 49 in 64 games, Mike Evans and Tyreek Hill his nearest competition with 41 apiece in 70 and 68 outings, respectively.

Adams’ evolution from understudy to underrated to a near-quintessential lead receiver could well have played a part in the Packers’ neglect for a loaded class of pass-catching playmakers at April’s Draft. Along with the wideouts available in 2017, 2018 and 2019, too, for that matter.

Aaron Rodgers suggested he wished he could ‘throw to Davante more’ in the 2019 offseason. That was after targeting him a second-most 169 times in the 2018 campaign, one fewer than Julio Jones’ 170 with the Atlanta Falcons.

‘You want to target Davante more? By all means, go ahead!’, general manager Brian Gutekunst might have been thinking while scratching ‘draft a receiver’ off his to-do list. Or something along those lines.

The Packers had to draft a receiver, be it a Tee Higgins, a Chase Claypool or a Michael Pittman Jr, all of whom were available at 26th overall. Rodgers deserved another weapon and Adams deserved another partner. And yet right now the Packers’ most pressing concern is Mike Pettine’s defensive unit.

Right now, Adams is playing a leading role in saving the face of those behind the decision to draft quarterback Jordan Love as opposed to another open field target.

Wide-spread admiration has been slow coming for Adams throughout his career, dating back to his time at Fresno State when he failed to garner quite the same amount of attention as others in his position despite leading the nation in yards and touchdowns in his final season.

After forgoing his final two years at college Adams was selected 53rd overall in the second round of the 2014 Draft, as the ninth wide receiver off the board.

If there were doubts over what he was entering into the NFL, there is no denying what he has become. That being one of the NFL’s talismanic, devastatingly-shifty elite receivers, whose trippy feet certainly aren’t lost on those around him.

“He’s been a great mentor, a great leader for our team and just as a fan and a receiver as well, watching him run routes is just beautiful, it’s an art in itself,” Packers receiver Allen Lazard told Sky Sports.

“I truly believe that his feet are registered weapons because I’ve seen him kill people with those. Being able to watch him, I take a little bit from his game and obviously he’s played in the league for such a long time and he’s been around other great receivers as well.

“He’s been able to drop a lot of knowledge not only on me but everyone else in the room so we can up our standards and up our level of play.”

Adams’ footwork is a staple of what he offers as a receiver. His catalogue of releases is largely unrivalled, and his double-moves mesmeric.

The detail to his pre-snap assessment of leverage is an intricacy reflective of his top five/top three reputation, while his knowledge of opponents is testament to his preparation, evidenced in the NFC Championship game against Richard Sherman as he targeted the cornerback’s length with inside releases.

To make life even more difficult for defensive backs, the releases aren’t pre-empted but formulated according to what they give him pre-snap. Alteration makes for unpredictability, which makes for a nightmare matchup.

And then there is his hop release to create immediate separation. It’s a thing of beauty, and why his route tree has enhanced with such ease over the years, his out routes and post-corner routes both favourites of Rodgers and prime examples of how infuriating it must be to cover him. Be it soft or press man coverage, he’s got you beat more often than not.

Dynamite footwork and downfield speed are then matched by a perfect transference of body weight that makes explosive double-moves look deceivingly subtle.

Adams once referred to his route-running as an ‘obsession’, while Rodgers recalled him sharing notes on release patterns and routes with college and NFL players, both active and retired.

That obsession has made him who he is, which, in his own eyes, is the best receiver in the league.

“I think that’s fair to say,” Adams said earlier this season. “I think that’s not being conceited; that’s just being confident. I think obviously what I’ve done and what I’m going to continue to do is going to prove that, to anybody who isn’t on board with that.

“At the end of the day, I’ll tell you yes, absolutely, I think I’m the best wide receiver in the game, but there’s a lot of things that go into me being able to make that statement.”

You wondered what might happen when the Rodgers-Nelson marriage was split in 2017 as the latter moved on after nine seasons, during four of which from 2011 to 2016 he put up at least 1,200 yards receiving.

Adams has inherited the role seamlessly since then, making 111 catches for a career-best 1,386 yards and 13 touchdowns in 15 games in 2018 before recording 997 yards receiving and five touchdowns in a 2019 season that saw him limited to 12 games due to injury.

Even before Nelson’s departure, Adams had recorded 1,882 receiving yards for 22 touchdowns across the 2016 and 2017 campaigns.

The 27-year-old caught eight passes for a franchise playoff record 160 yards to help the Packers beat the Seattle Seahawks 28-23 in last season’s Divisional Round matchup, including a 32-yard over-the-shoulder catch to convert a late third down.

“It reminds me of the connection that Jordy [Nelson] and I had for so many years where there’s some unspoken things that we could do without even communicating anything about it,” Rodgers said after the game.

That chemistry has carried into 2020, with Adams becoming just the third player behind Randy Moss and Marvin Harrison to have 700+ receiving yards and nine+ receiving touchdowns in his first seven games of a season.

“Dude is a special player. One of a kind. He never ceases to grow my respect. Just another chapter for him today,” Rodgers said after Adams shrugged off an early ankle injury to make eight catches for 66 yards and a touchdown in the Week 10 win over the Jacksonville Jaguars.

“That’s what you want from your leaders.”

The Packers look great when Adams looks great. They look even better when he gets some help, the dual-threat prowess of Aaron Jones and Jamaal Williams a key component out of the backfield and the likes of Lazard, Marquez Valdes-Scantling and Robert Tonyan having all provided signs of being capable support.

While Adams sets the tone, the onus is on those around him to learn, to follow, and to try and match. And they know it.

“To think that another receiver is not going to get brought in is insane, they’re going to draft a receiver in maybe next year’s class or the following year, it’s going to happen at some point or they’re going to sign receivers in free agency,” Lazard added in his interview with Sky Sports over the summer.

“For me, I want the best competition in the room because it’s only going to make me better and up our level of play. Ultimately, it’s only going to put us in a better position to go win the Super Bowl which is what we’re all trying to do.”

Until then, the superstar wearing 17 will continue to shoulder the workload as a teammate and as a talent who Rodgers will consider among the best he has worked with come the end of his career.

Watch the Green Bay Packers at the Indianapolis Colts, live on Sky Sports NFL this Sunday from 9.25pm.