Kell Brook’s former trainer Dominic Ingle admits his old charge is up against it when he takes on Terence Crawford in Las Vegas this weekend.

The Sheffield fighter, a former welterweight titleholder, is a huge underdog against one of the pound-for-pound best and Brook did a lot of his preparation with Carlos Formento in Spain before flying out to finish camp in Nevada.

Cynics think Brook is cashing out, that he’s making one last cash grab before calling it a day.

But he’s been positive in the build-up and he’s become familiar with being written off, as he was in his lucrative losses to Gennady Golovkin and Errol Spence.
Brook’s team is unrecognisable from his championship days as he’s had a well-documented difference of opinion with Matchroom promoter Eddie Hearn.

Brook is now a 34-year-old 41-fight veteran and he’s an experienced hand. But Ingle has seen it before, too. His family has coached kids to championship level and then fighters have moved on and away.

“The gym and everyone in it kept Naz [Naseem Hamed] and the others on track – but at the time they don’t realise that and think they’re doing it all on their own – it’s only when they leave that they realise they had the support system behind them,” said Ingle.

Brook has had a notoriously wayward time away from the ring and Ingle said they hadn’t even discussed the Crawford fight.

Ingle would have preferred Brook to take a keep-busy fight to close out 2020 with a big bout in 2021. That’s not how it’s worked out.

Kell has a mountain to climb.

“It would have to be a prime Kell Brook,” said Ingle, when asked what it would take for Kell to win. “First of all, if Kell went into that fight strong, fit, on it, then you’d just tell Kell to do what he normally does, back Crawford up, slip shots, ping him with timed shots and make sure they’re accurate so Crawford is less inclined to take risks. Kell will believe he can do that but whether he’s got the engine now, or the timing or the stamina and endurance due to not making that weight for over three years I don’t know. I think he’ll be taking more shots than he normally does.

“He’s still going to have his power but his timing might be off, making the weight at 147 will take a lot out of him. He can make it, because he’s determined that way but when you think, from Kell winning the world title fight, he’s not had consistency or continuity either through injury or lack of big fights [since]. Crawford’s a clever fighter. If he feels Kell’s power he’ll be moving, popping him, keeping the pace up and trying to make Kell gas, believing he’s a weight-drained fighter. If Kell doesn’t start having an effect in the first four rounds and making an impression on Crawford, he’s not in the fight and his power’s not telling, then he’s either going to get beat on points or it’s going to be a late stoppage. You can always tell in the first four rounds how it’s going to go [with Brook].” 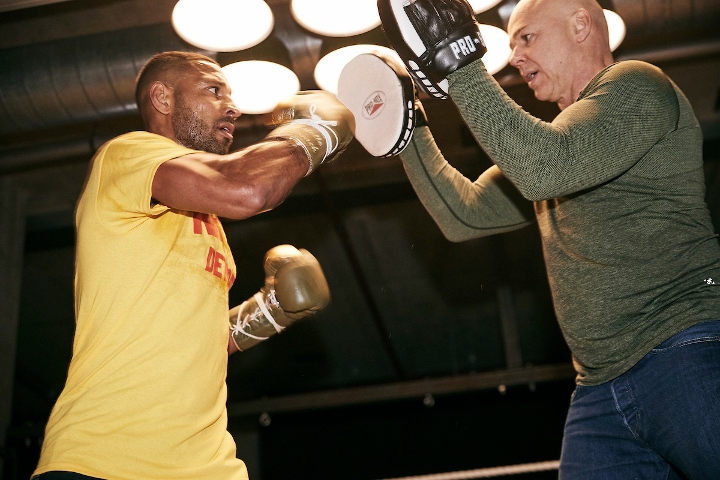 And while Ingle says there’s been no fall out, he won’t be watching it on Saturday night (or Sunday morning on Premier Sports in the UK).

“I won’t watch it, no,” he stated. “It’s not of interest to me if I’m not involved. I watched him in the [Michael] Zerafa [fight] and it made me feel uncomfortable and disappointed. I’ve done my bit with Kell. I got him to world championship level and all those other fights and what many fighters don’t appreciate is the amount of sacrifice and commitment you have to put in on a personal level to get them there. From that point onwards you expect a little bit of credit and respect for keeping them on track as we did with Johnny Nelson and Junior Witter where they finished their careers with us. When I was getting 10 per cent of £1,000, £2000, £3000 purses you’re putting in all the hard work then, you’re building a base and you’re putting in time and effort and hours for the pay-off later on down the line. When they become world champions and they don’t appreciate what they’ve got, it’s disappointing. I’ve been with Kell 23 years, since he was 10. It’s a lot of time and effort and we’ve had good times and money but it was disproportionate to the amount of time invested. If he wins, good because I’ve been part of the process and that’s satisfying and if he doesn’t, he doesn’t. Hopefully he won’t end up a springboard for some young prospect’s career.”

Ingle thinks that Kell might be relying on his experience to hang tough against Crawford and wonders whether Brook will appreciate how depleted he may feel having to hit 147 for the first time since he fought Spence in 2017.

He also doesn’t envisage them having a boxer-trainer relationship again.

“There will be no need for me to work with him again after this fight because if he wins he’s on his way and if he loses it’s a massive rebuilding process for everyone involved which could be much better spent on someone younger and more ambitious,” he said.

Brook explained that part of the reason he’s not training with Ingle is because he needed to be a focal point of the camp while Ingle had fight dates and camps with two of his other fighters, Willie Hutchison and Liam Williams, to accommodate. But he contends Brook could have been better served being with them, with young and ambitious pros.

“Barry [Kid Galahad]’s the measuring stick in our gym, he has a constant level of fitness and determination,” Dominic continued. “If you can stick with Barry through a training camp do the runs, the rounds of sparring then it’s a good indication of being in the right place. Him and Kell were always neck and neck they were always pushing each other on. Barry was the marker and you could measure Kell’s determination and will to win by their competitiveness but now there are no markers, only his own idea of his ability and sometimes that can be distorted by backslappers and those people pumping up the ego. You can’t set your own limits in a training camp whether they be high or low. But I don’t hold it against him. Loyalty works both ways. We’ve not fallen out. I’d never fall out with Kell. I’ve not got any bad feelings towards him whatsoever. This doesn’t happen on the way up, it always happens at the back end of their careers. He has always come to the gym and done his own stuff even before this fight.

“Even before he signed for this Crawford fight, I said to come in and use the gym then when it’s confirmed, let’s talk business. Outside of boxing we didn’t have a relationship. Every now and then we might go on a cycle ride, we didn’t socialise, we didn’t phone each other between fights. I left him to live his own life because his lifestyle was different to mine, his friends were different… I went to his children’s christening, stuff like that, but that was it. It was all training, that’s what our relationship was. There’s no bitterness with me at all.”