Watch Sunday’s Turkish GP as Lewis Hamilton bids to equal Michael Schumacher’s haul of seven F1 drivers’ titles; But can he win the race from sixth on Lance Stroll-led unusual grid? Tune in to Sky Sports F1 and Main Event live at 10.10am, with build-up from 8.30am

Live only on Sky Sports F1 and Main Event at the early time of 10.10am, with build-up from 8.30am, Hamilton starts from sixth place but will be champion for 2020 as long as team-mate Valtteri Bottas does not outscore him by eight or more points.

Mercedes have been off the leading pace all weekend so far, in dry and wet conditions, with their usually-dominant W11 car – and specifically its tyres – unable to get to grips with an extraordinary slippery new asphalt around Istanbul Park, which has led to a surprising mixed-up grid headed by Lance Stroll for Sunday’s race.

But Hamilton’s chances of wrapping up his seventh championship with three races to spare were still boosted on Saturday due to the fact he qualified three places ahead of ninth-placed Bottas, his sole title challenger, in the sister Mercedes.

The bigger uncertainty therefore appears to be whether Hamilton can close out that crown by fighting for the podium positions across the 58-lap race distance.

“I have no idea what car I’ve got underneath me,” Hamilton conceded to Formula 1 after qualifying.

“If it’s dry, I have no idea how it’s going to feel, and if it’s wet I know it could feel as bad as it did today.”

Only two of Hamilton’s six title wins to date (2015 and 2016) have been clinched via a race victory.

Weather conditions for the race on the outskirts of Istanbul remain uncertain for Sunday but the threat of rain showers linger. Temperatures are also set to remain cool.

Andrew Shovlin, Mercedes’ track engineering director, said: “We’ve got some freedom to make a few changes to the car tomorrow and we need to have a good look at things ahead of the race because tyre warm-up is going to be critical. Once we get temperature in the tyres, we seem to be in decent shape and the car seems to be working well, so getting the rubber to work is our main concern.” 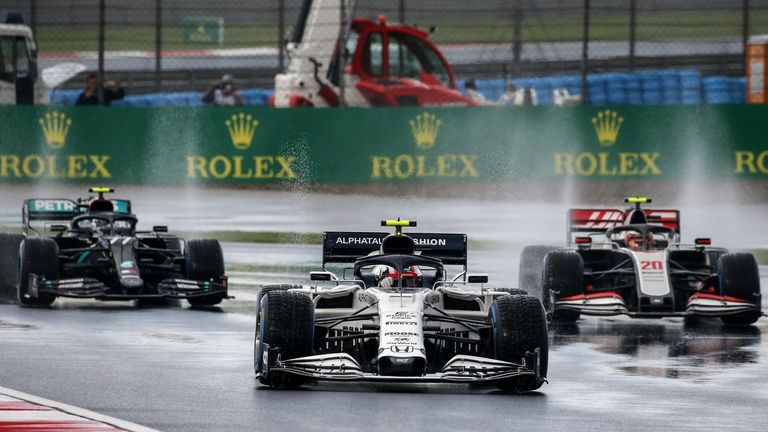 “Whatever your wildest predictions may be, they could happen tomorrow.”

After a shock pole, could Turkey see a shock winner?

Stroll’s brilliant but out-of-the-blue run to pole position for Racing Point in Saturday’s very-wet qualifying session has opened up the possibility of the 2020 season’s second unexpected race result after Pierre Gasly’s triumph for AlphaTauri at Monza in September.

Racing Point have made big strides with their Mercedes-inspired car this year but have not won a race in their current guise – the Silverstone-based team last won when known as Jordan in 2003 – while neither Stroll nor team-mate Sergio Perez, who starts third, has won in F1 either.

“It will be nice to start at the front,” said Stroll to Sky F1. “I’ve started up the front, but to really be on pole without anyone in front of me, no one blocking my view of Istanbul, will be nice!

“They have a much quicker race car [Red Bull and Mercedes], that’s just the reality, but that doesn’t mean we can’t score a bunch of points. We are fighting for that third place in the Constructors’ and it’s a great opportunity with both cars starting at the front to pick up some big points.”

Red Bull’s Max Verstappen certainly represents their biggest threat with the Dutchman starting between the two Racing Points in second place. Verstappen has only won once this year, at August’s 70th Anniversary GP at Silverstone, and was disappointed to miss out on pole having set the pace in every session up to Q3.

“I think Lewis and Valtteri are a bit further down but I’m also starting now on the inside [of the grid] so that’s not very lovely,” said Verstappen. “But we’ll find out tomorrow.”

With Red Bull’s Alex Albon fourth, Renault’s in-form Daniel Ricciardo, a podium finisher in two of the last three races, is also up at the sharp end in fifth place – and anticipating a very open Sunday.

“Whatever your wildest predictions may be, they could happen tomorrow. I really don’t know what to expect,” said Ricciardo.

“Even if it’s a dry track, it’s so slippery. Whatever rubber we put down is gone today so [Sunday] it will feel like wet conditions even with 20 degrees sunshine.”

What’s the grid after McLaren’s penalties?

The McLaren grid drops have shuffled the middle of the pack on the provisional grid order, with the Ferraris among the beneficiaries after the Scuderia’s own disappointing double Q2 exit.

The permutations: How can Hamilton clinch the title?

If Bottas wins the race with the fastest lap (26 points), Hamilton cannot be champion in Turkey

If Bottas wins the race without the fastest lap (25 points), Hamilton will be champion if he is second (18 pts)

If Bottas is second with the fastest lap (19 points), Hamilton will be champion if he is at least fourth (12 points)

If Bottas is third with the fastest lap (16 points), Hamilton will be champion if he is at least fifth (10 points)

If Bottas is fourth with the fastest lap (13 points), Hamilton will be champion if he is at least seventh (6 points)

If Bottas is fifth with the fastest lap (11 points), Hamilton will be champion if he is at least eighth (4 points)

If Bottas is sixth with the fastest lap (9 points), Hamilton will be champion if he is at least ninth (2 points)

If Bottas is sixth without the fastest lap (8 points), Hamilton will be champion if he is at least 10th (1 point)

If Bottas is seventh or lower, Hamilton is guaranteed to be champion