Eddie Hearn says he could spark worldwide interest in women’s boxing with a plan to have undisputed world champions in every division by the end of 2021.

Hearn believes it will be possible to organise a series of tournaments to unify the belts in each division, creating not only a memorable series of bouts but also raise the profile of all the champions.

Katie Taylor, the undisputed world lightweight champion, headlines Hearn’s triple women’s world title bill in London on Saturday. The only other present undisputed women’s champion is Jessica McCaskill, at welterweight, while Claressa Shields won all the belts at middleweight before moving down to super-welterweight.

“Everyone says the biggest problems in boxing is too many belts, so the dream is one world champion in every division,” Hearn said. “It’s hard in men’s boxing, but it’s possible in female boxing. If I wanted to almost wrap it up, it would be possible for me to have one champion in each weight class by the end of 2021.” 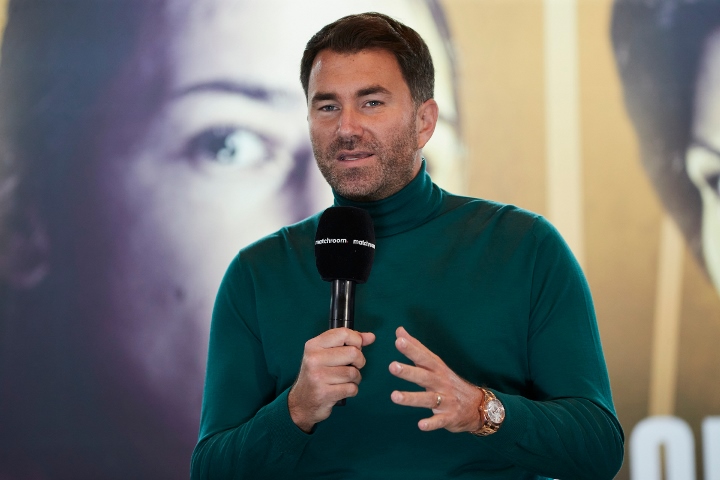 According to Hearn, unlike male world champion, women are keener to take the hardest fights available, making unification fights easier to make.

“All the champions are the same,” Hearn said. “If you ask them who they want to fight next, they all say ‘unify.’ They don’t turn down any opportunity. It is not a case of being grateful for the opportunity, it is because they have not been spoilt. If they get an opportunity, they grab it, they don’t say they want a couple of voluntary defences. Compared to male boxers, it is so refreshing. There is also huge support from broadcasters now.”

It was four years ago this month that he staged Taylor’s professional debut at the SSE Arena, Wembley. The same venue stages Saturday’s historic card, topped by Taylor defending her lightweight belts against WBA interim champion Miriam Gutierrez, from Spain.

On the same bill, Terri Harper defends her WBC super-featherweight title against Katharina Thanderz, of Norway, while Rachel Ball and Jorgelina Guanini meet for the interim WBC super-bantamweight title, after Guanini failed two check weights, meaning they could not contest the vacant WBA bantamweight title.

If Harper wins, a unification fight is not likely to be far away after Matchroom announced that they have signed Hyun-Mi Choi, the WBA champion from South Korea, having already signed up Maiva Harnadouche, the IBF champion from France.

Hearn has been giving women’s boxing more prominence since lockdown, with Harper headlining one of his Fight Camp shows in August. He says it has taken him time to see the full potential of female boxing. Saturday’s show has also been made available for free on Sky Sports’ website, Facebook and YouTube pages, ensuring the card reaches the biggest audience possible.

“When I signed Katie, calling it a novelty act would be wrong, but I wanted to cause a stir,” Hearn said. “We got so much stick, people were asking why we were bothering. Now we sit here with three world championships fights.

“It has all been led by Katie, but the fights have been fantastic and I think there is a fascination with female fighters. You look at Katie and Terri. They are quiet as a mouse and they go in the ring and are like animals.

“It has gone from being a novelty act to being there on its merits and that is where you get sustainable progression and fans being invested.

“The quality is there now on its own merits, not because we think it’s right to promote women’s boxing. You get on a show if you are an entertaining boxer, male or female, it doesn’t matter. That’s equality.”

Hearn has come in for criticism for the level of pay female boxers receive but he insists it is fair for what the product is and points out that Taylor is paid more than many male world champions.

“For every fight the purses are based on the commercial value of the fight,” he said. “There is still a gap, but we are nearly there. But there is no set purse if you are male or female. Katie Taylor is paid a lot more than some male world champions, but it takes time for as many female fighters as possible to earn that kind of money.”

Should Taylor beat Guiterrez, Warren is looking at three options for her next fight, including a cross-sports fight with mixed martial arts star Cris Cyborg.

Other options would be the twice cancelled fight with Amanda Serrano and the winner of the undisputed world welterweight title rematch between McCaskill and Cecilia Braekhus, which Hearn says will take place in January.

“We have been been talking to Scott Coker at Bellator,” Hearn said of a possible Cyborg fight. “That would be a great crossover fight.

“It is so easy, because Katie will fight anyone.”