Then again, Crawford doesn’t think that was the smartest move the ambitious Brook could’ve made. A then-unbeaten Brook took a lot of punishment in four-plus rounds versus Golovkin, who stopped him in the fifth round and broke the orbital bone around Brook’s right eye in September 2016 at O2 Arena in London.

Brook’s injury required surgery. After one fight at the middleweight maximum of 160 pounds, Brook then had to drop down 13 pounds for his subsequent bout, an 11th-round knockout loss to Errol Spence Jr. eight months later at Bramall Lane, an outdoor soccer stadium in Sheffield, England.

“It was brave of him, but at the same time stupid of him,” Crawford told BoxingScene.com following their press conference Wednesday at MGM Grand to promote their welterweight title fight Saturday night. “But at the same time, it shows how he believe in his self, going up to fight a guy like Golovkin.” 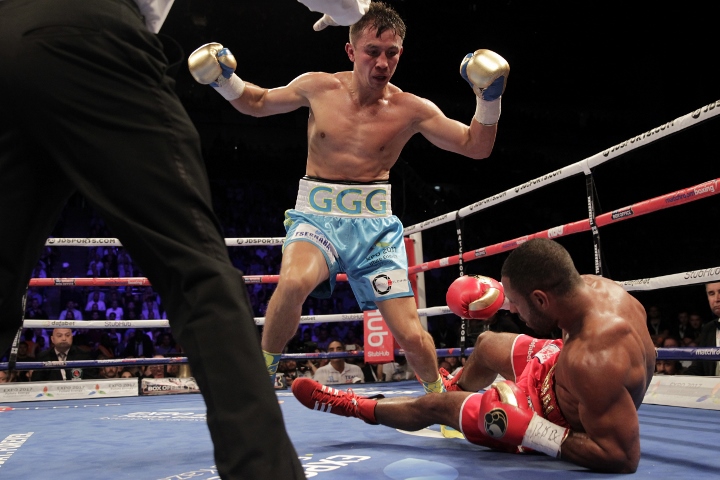 Brook was very competitive versus Golovkin, despite his size and strength disadvantages, and landed numerous flush punches on Golovkin’s granite chin.

Brook memorably lifted Golovkin off the canvas when he landed a right uppercut late in the first round. Brook was ahead on one scorecard, 39-37, and the other two judges had their fight even (38-38, 38-38) when his trainer, Dominic Ingle, threw in the towel during the fifth round.

By then, Brook’s broken right eye socket had made it unusually unsafe for him to continue in their 12-round battle for Golovkin’s IBF, IBO and WBC middleweight titles.

“He was doing good,” Crawford recalled. “But Golovkin was looking for that one punch to knock him out. Once Golovkin caught up to him, you see him starting to break him down. There’s weight classes for a reason.”

“It gives me a lot of confidence because I’ve been in with not just a normal middleweight,” Brook told BoxingScene.com, “but a middleweight who was the king and who could punch like a mule and who could take a shot. You know, this guy [Crawford] has shown to me that he’s been wobbled in fights by guys smaller than him and he does not punch, believe me, like Golovkin. So, I’ve been in there at the highest level, believe you me.”