It will be the first time since the late 1970’s that a fighter from Uruguay headlines a boxing event in the United States.  At that time, Uruguay heavyweight Alfredo Evangelista did it in his world title battles against legends Muhammad Ali and Larry Holmes.

Evangelista was the side B in those historic fights.  But Vidal will not be side B on Saturday, as the young hard-swinging Uruguayan appears as the favorite.

In order to get the best preparation possible, the Uruguayan puncher Vidal, together with his brother and coach Richard Vidal, trained for more than a month in Coachella, California, at a home/gym recently built by Sampson Lewkowicz. 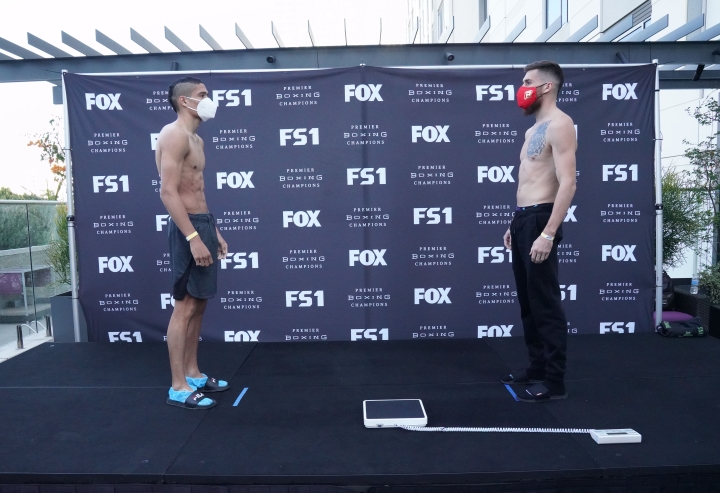 During the official weigh-in at the Marriott Hotel in Los Angeles, located opposite the Staples Center, the slugger Amilcar Vidal scaled-in at 161.8 pounds, while “The Hunter” Ortiz made 163 lbs.

The 24-year-old Vidal  –  handled by Sampson Boxing  –   risks his unbeaten record as well as his ascent in boxing against the also undefeated Edward Ortiz, a glory-hungry warrior from San Antonio, Texas.

Ortiz, 28, will not be easy prey for Vidal.  Far from that as the Texan has waged boxing wars since a young age, becoming an outstanding amateur boxer.  Ortiz, who can boast more than 200 tough fights in his amateur record, is 100% focused on scoring the win.

Among other achievements, in 2015 the 6 ‘ 2 ” Ortiz won gold in the U.S. national amateur championship held in Spokane, Washington.

Ortiz had his pro debut in April of 2016.  His latest combat was last August 22, in which he defeated Georgia’s Antonio Todd (7-4, 4 KO’s) on points in Los Angeles.

Meanwhile, the promising Vidal hasn’t fought since January when he disassembled then unbeaten Mexican Leopoldo Reyna (9-1, 4 KO’s) in one round at the Radisson Hotel in his native Uruguay.

The hard-hitting Apochi weighed-in at 199 pounds, while the American Jones came-in 7 pounds lighter at 193.   Both men pack explosive firepower.  Who will prevail?

Promoters for the event are Sampson Lewkowicz Boxing in association with Tom Brown’s TGB Promotions and Premier Boxing Champions.