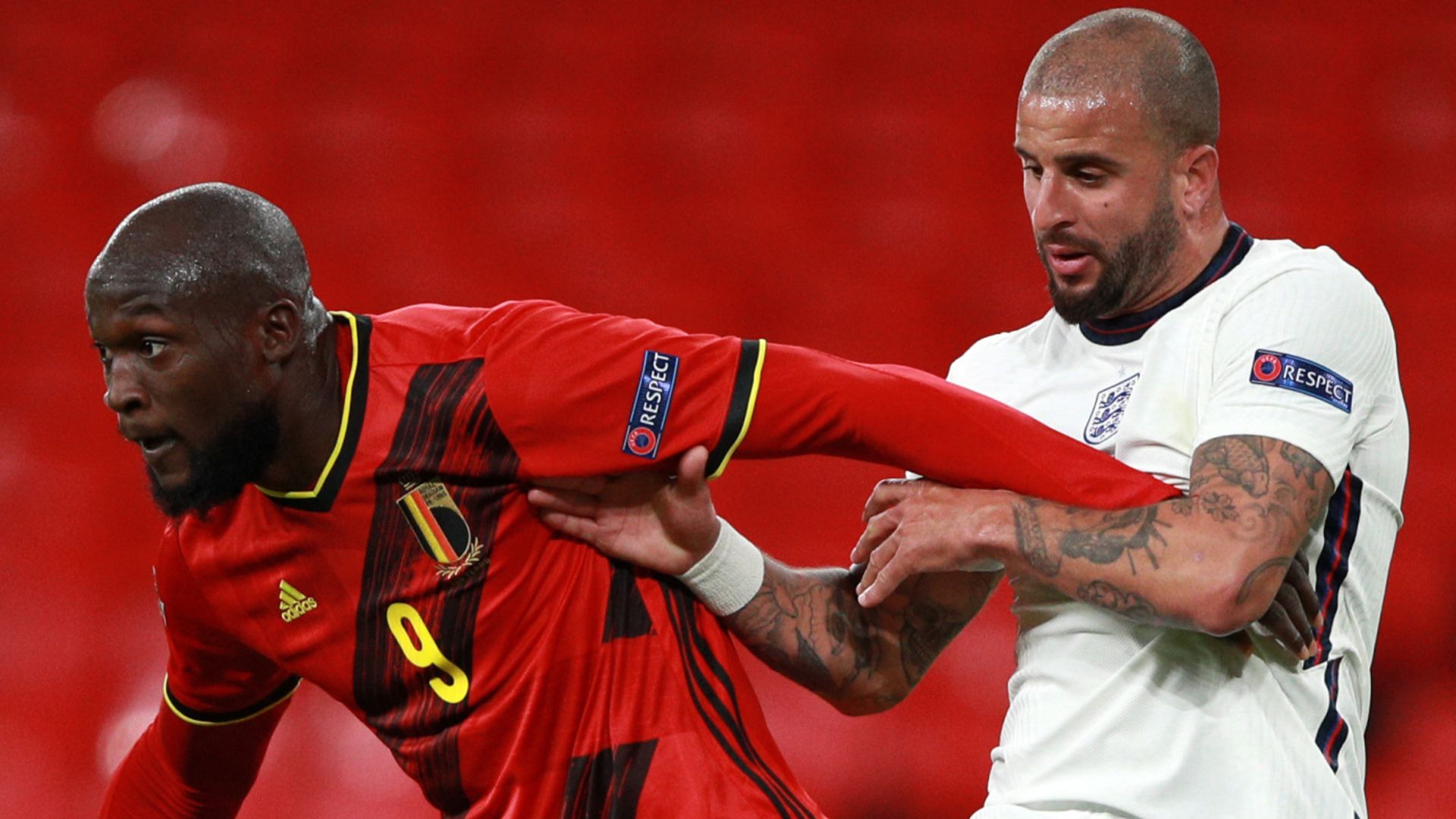 England face their biggest test of the current Nations League campaign when they travel to world No 1 side Belgium on Sunday, live on Sky Sports.

Gareth Southgate’s side head into the game after a comfortable 3-0 win against the Republic of Ireland in Thursday’s friendly and face a huge examination of their progress with an away trip to Leuven.

But England will still bare some of the scars from their 1-0 Nations League defeat to Denmark in October. Harry Maguire and Reece James will be suspended after both were sent off at Wembley and England will be aiming to reclaim top spot in Group A2, live on Sky Sports from 7pm.

Belgium are the current group leaders and also lead the FIFA world rankings with England in fourth. They battled from a goal down to beat a strong Switzerland 2-1 in their friendly on Wednesday with Crystal Palace striker Michy Batshuayi scoring both goals. However, it was a much-changed side from Roberto Martinez and his star names will be back for Sunday’s crunch game.

England will be hoping for a repeat performance – in some respects – from the reverse Nations League fixture against Belgium at Wembley last month.

Inter Milan striker Romelu Lukaku gave the No 1-ranked side the lead with a 16th-minute penalty. His former Manchester United team-mate Marcus Rashford levelled things up, also from the spot, just before half-time.

England were much improved after the break and won the game with a superb strike from Mason Mount for his second international goal.

In their overall fixture history, England have won 15 times with four draws and four defeats, although two of those losses came at the 2018 World Cup when Belgium won both the group stage and third place play-off games.

Southgate: England must beat likes of Belgium to be the best

Southgate underlined England’s aim to be the best by hunting down the likes of Belgium as they approach Sunday’s must-win Nations League match – live on Sky Sports – at the world’s top-ranked side.

Asked how tall an order it will be to win in Belgium, the England manager said: “Well, I think we know – they’ve lost two games in 28, so they’re a fantastic team and they’ve proven that over a long period of time. But our aim is to be the best team in the world and we’ve got to hunt these teams down.

“We were able to do it at Wembley. I think we saw what a top side they are there, so we know that we had to be at our very best with and without the ball to get that result. That will be the same tomorrow but we’re not fearful. We’ve got to go into the game with a very positive mindset.

“We know that we can hurt teams, we’ve got players who can score goals, and we know we’ve conceded two in our last nine games so we’re an improving team. We’re a team that are going to get better over the next few years.

“You know, when you look at the age of youngsters and the team that was on the pitch the other night [against the Republic of Ireland] – 19-year-olds, 17-year-olds, several 20, 21-year-olds. The future is so exciting. What we’ve got to do is make sure we’re getting results and progressing now as well.”

England captain Harry Kane is likely to return to the starting XI on Sunday and if he does, will earn his 50th cap.

He has has netted a remarkable 32 times since making his debut in March 2015 and is currently sixth on the all-time list, 21 goals behind current leader Wayne Rooney (53).

Southgate has backed him to surpass Rooney saying: “In terms of what is possible, the goalscoring record is the really interesting one because his strike rate for us is phenomenal and he has time on his side to chase Wayne Rooney’s record which would be a remarkable feat.

50 up for Martinez and Kane

“I know from his perspective, while the personal achievement is something he is driven towards, it is the team achievement. He is so focused on the team having success and he would want to look back over the next few years at the team achieving.”

Martinez will also take charge of his 50th game as Belgium manager this weekend, and had plenty of praise for Kane ahead of their joint milestone.

“I didn’t know about our landmark of 50 games came in the same game,” Martinez said. “But with Harry Kane, I know much is demanded for a player nowadays to get 50 caps and I think that shows you the commitment that he has for England.

“I had the opportunity of seeing Kane developing and growing as a player, going out on loan from Spurs and then starting to play.

“I think he’s evolved into one of the most clinical number nines in world football and you’ve got a very modern target man in Harry Kane – someone who can assist and play and has got great finishing stats.

“I think he is a very complete striker but it’s a wonderful story of seeing a young player develop – going out on loan, getting different experiences in different clubs and then becoming this iconic player for Spurs and for England.”

Southgate refused to be drawn into the debate on whether Mason Mount or Jack Grealish deserved to play ahead of the other for England.

West Ham midfielder Declan Rice, a lifelong friend of Chelsea midfielder Mount, says the framing of the debate has been harsh on Mount and believes there is room for both players to start in the national side, like they did in England’s 3-0 win over Ireland earlier this week.

“We don’t speak about it but it is very harsh,” Rice said of Mount’s criticism. “I know what his mentality is like. I know how driven he is. It is no surprise that Gareth picks him, Frank [Lampard] picks him and if you gave every Premier League manager the chance, they would pick him as well.

“If you look at Jack and Mas, there will always be comparisons but they are playing in two different parts of the pitch.

“Mason now at Chelsea is playing as an attacking eight and Jack is playing off the left (at Aston Villa) and we saw the other night they can both play in the same team and they are both great players we should be valuing.”

Belgium will be without Eden Hazard after his positive test for Covid-19 but Martinez confirmed that Lukaku should be fit to feature and was set to training on Saturday.

Joe Gomez, Conor Coady and Rashford all withdrew from the England squad ahead of the Republic of Ireland game and will not feature in Leuven. Maguire and James will also be suspended, with the Manchester United captain available for the next match against Iceland while Chelsea full-back James has returned to his club.

All of the remaining 24 England players trained on Saturday having passed the latest round of coronavirus tests and will be available for the crunch Nations League fixture.

Watch Belgium vs England live on Sky Sports Premier League and Sky Sports Main Event from 7pm on Sunday; kick-off 7.45pm. You can also follow all the latest in our dedicated live blog across Sky Sports’ digital platforms, with the latest build-up, match commentary and expert analysis. There will also be in-game clips and free match highlights shortly after full-time.