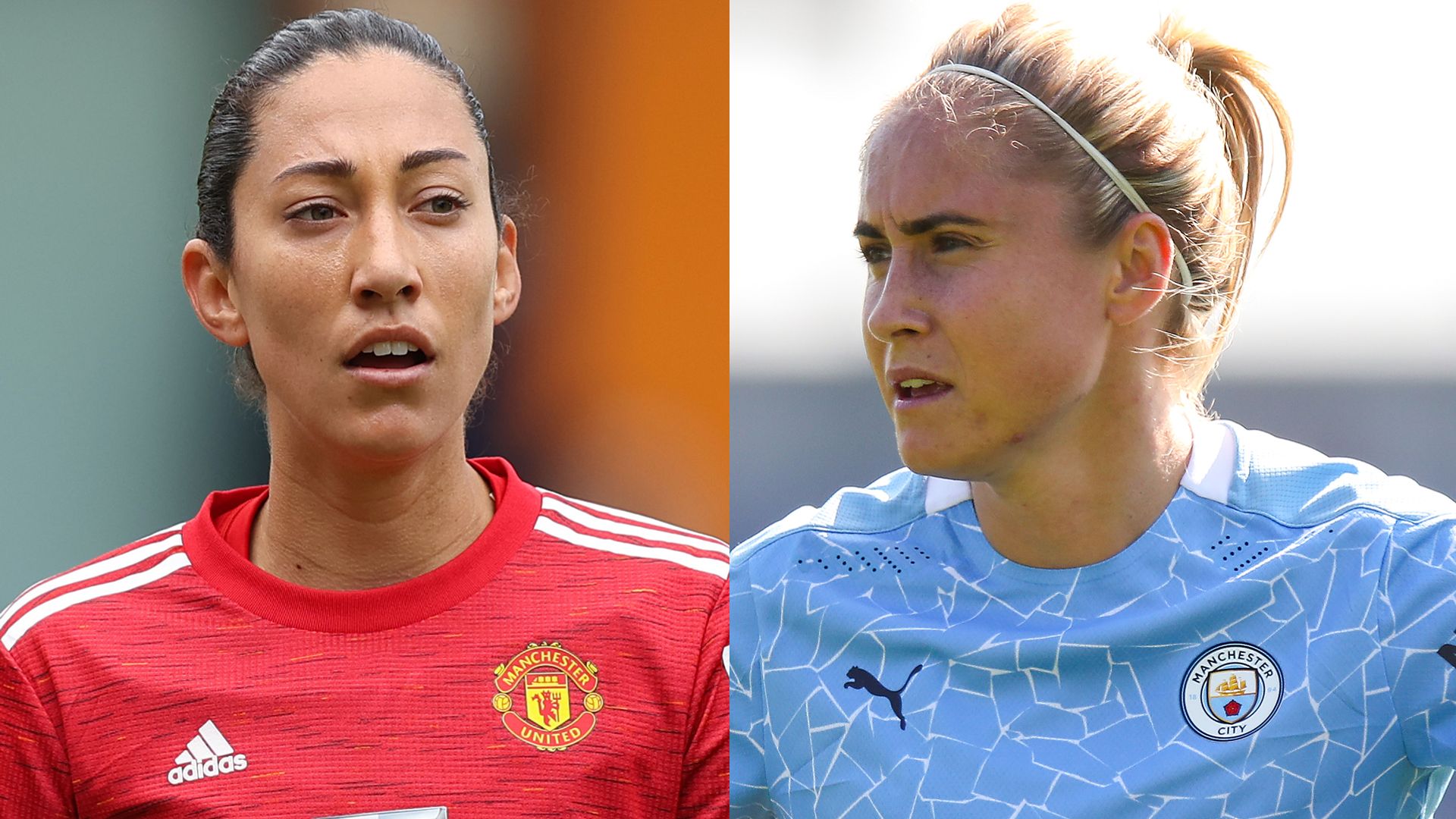 Manchester United Women and Manchester City Women meet in their fourth Manchester derby on Saturday, but who will take the bragging rights?

It is fair to say that United have had a pretty meteoric rise since their reformation in the 2018/19 season. Casey Stoney’s side stormed to victory in their inaugural Women’s Championship season, winning the league by nine points, and finished fourth on their WSL debut last term, albeit curtailed.

But the coronavirus pandemic can’t stop them this time. United went top of the WSL on Sunday, beating and subsequently leapfrogging Arsenal to the No 1 spot. It was the Gunners’ first league defeat this season thanks to Ella Toone’s goal, keeping Stoney’s side unbeaten.

City have had a trickier start to the season after the agony of losing out on the WSL title last season. They were top when the coronavirus pandemic halted the league and was eventually decided on a points-per-game basis, handing Chelsea a third WSL title. City had to settle for the runners-up spot for a third season in a row.

A 3-1 defeat to Chelsea plus two draws sees them in fifth and five points off leaders United, but Gareth Taylor’s side thrashed Bristol City 8-1 on Saturday to reignite their pursuit of a first WSL title since 2016.

City (12) have already played nearly twice as many games as United (7) since the start of the season. City lost their first game of the campaign – a Community Shield defeat to Chelsea – but have picked up a trophy since.

After being suspended due to the coronavirus pandemic, the 2019/20 FA Cup restarted in September – three weeks after the start of the 2020/21 WSL season – picking up with the quarter-finals. Confusing, I know. City went on to win the trophy, beating Everton 3-1 in the final on November 1 to be crowned 2019/20 FA Cup champions.

It was a baptism of fire for United on their WSL debut, facing City in their first game. Caroline Weir’s stunner from 20 yards decided matters in front of a then-record WSL crowd of 31,213 at the Etihad Stadium.

Just over a month later and United exacted some revenge with a 2-0 win in the League Cup. Katie Zelem and Jess Sigsworth netted the goals against then-holders City.

There was another cup meeting between the two in January with City victorious in their FA Cup encounter. Ellen White scored twice to give eventual winners City the lead, before Lauren James pulled one back for United. Jill Scott ultimately decided matters in the 76th minute but a Lauren Hemp own goal with minute to play made for a nervy finish, but United were unable to complete the comeback.

Man Utd’s star names: With American stars flocking to British shores this summer, two of their most talented arrived at United. Tobin Heath and Christen Press were the marquee signings and the World Cup winners have each played in four WSL games out of six this season. Heath leads the way for stats, though – scoring once and assisting twice – while Press has scored once so far.

Man Utd’s underrated stars: Forward Ella Toone has a number of Manchester connections on both sides. She spent part of her youth career at United, before making her professional debut with City in 2016. She eventually joined United in 2018 ahead of their first season in the Women’s Championship and after great success, signed a new deal with the club in the summer. She has three goals and an assist in five games so far this season.

Man City’s star names: Man City’s squad is packed full of England stars. Lucy Bronze returned to the club last summer and continues to show why she is one of the best in the women’s game, while Ellen White has three goals and two assists in the WSL this season. She also became only the second player to reach 50 goals in the league with a double against Bristol City on Saturday.

Sam Mewis, arguably one of City’s biggest names, was another heralded USA arrival this summer and has featured in six games so far, scoring twice in the WSL.

Man City’s underrated stars: Although well known by England fans, Georgia Stanway flies somewhat under the radar with the likes of White and Mewis also in the ranks. The forward already has three WSL goals this season and one assist and helped Man City to an FA Cup win a few weeks ago.

Chloe Kelly has also performed well since her summer arrival from Everton. She scored twice in a 4-1 win against Tottenham in October, adding a consolation penalty in City’s only league defeat so far against Chelsea.

Forward Alessia Russo will be missing for Man Utd after sustaining a hamstring injury.

Man City manager Gareth Taylor says Lauren Hemp is ‘ahead of schedule’ for a return to action, but will miss out on the Manchester derby. He added that outside the known injury concerns – including long-term absentees Aoife Mannion and Megan Campbell – he has a fit squad to choose from.

Keep up-to-date with all the latest from Man Utd vs Man City across Sky Sports’ digital platforms with our dedicated live blog.

“You look at that top three, who have dominated the game for so long in Arsenal, Chelsea and Manchester City. To try and even break into that three was a target for us.

“We are probably ahead of schedule in terms of where we are at, but I said on Sunday it is just one win. It keeps us in and around it and we need to maintain our standards and levels and try to go again on Saturday.

“It is just the next fixture for us. We said on Sunday yes it was a big win [against Arsenal], but this only matters if we follow it up. We think that way about every game – whether it is a Manchester derby or Brighton like we had before. It is obviously a game we go into wanting to win, but we also know we are playing an excellent side.”

Man Utd captain Katie Zelem: “We all know how much it means to us, the supporters and our fans. It is a game we always want to win. We want to come out on top and make sure Manchester is red.

“We know there’s a lot of external media saying maybe we are favourites. Obviously we are going into it top, but for us that doesn’t mean anything.

“We attack the game like we would any other. We always want to win the Manchester derbies and this one will mean the same and so much to us.”

“Our game is one of the picks of the ties so it’s something we’re geared up for. I was fortunate to play in derbies at various clubs and coaching-wise, you want to be involved in games with city rivals.

“It’s a great opportunity for us to go within two points of them. They’ve made a good start to the season in the WSL and they’ve had some good results.

“It’s an important game but they all are. There are plenty more opportunities to come this season where teams will take points off one another. There will be some important games and important moments.

“For us, this is a real good opportunity to go there on Saturday, put in a good performance and try to come away with three points. It’s a big game and one we’re looking forward to.”

Man City captain Steph Houghton: “Everybody is looking forward to it. Manchester City against Manchester United is a special one – it speaks for itself! It’s one of the first fixtures you look for when they come out. It’s unusual that we’ll be playing them twice in a week, but these are the games you want.

“It’s massive for the fans but also for us as players. You always want to be part of the big games and we’re fortunate to be having those games week in, week out.

“In their first season, United were successful and they’ve recruited really well this year. They’ve added that quality and experience they were probably lacking a little in stages last season.

“I know Casey very well as a person and I’ve heard so many good things about the way she coaches and manages. They’ve developed a lot. They’ve gone on a similar path to us in our first few years. We just have to play the way we want to play and focus on one game at a time.”