Based on Errol Spence’s latest win and upcoming fight, Keith Thurman can’t quite understand how he doesn’t fit into that part of the welterweight picture.

A growing feud has developed between the pair of top-rated 147-pound boxers, though one that doesn’t threaten to make its way to the ring anytime soon. Thurman continues to insist that the road to supremacy through the welterweight division continues to run through him, and anyone not willing to face him needs to move out of the way altogether.

The Clearwater, Florida native—who turns 32 later this month—has taken the growing feud to another level, taking note of Spence’s growing, yet eerily familiar résumé. Spence is coming off of a thrilling 12-round split decision win over Shawn Porter in their title unification clash last September in Los Angeles. The Desoto, Texas native next returns December 5, when he faces Danny García at AT&T Stadium in Arlington, Texas.

“Spence has fought Porter, and now Garcia – guys I already handled a long time ago – so he’s fighting in my shadow,” Thurman stated in the most recent edition of The PBC Podcast. “Porter has aggression. Garcia has the counters. But Keith Thurman can be aggressive, counter and show movement and power, so I’m someone he’s never been in the ring with.” 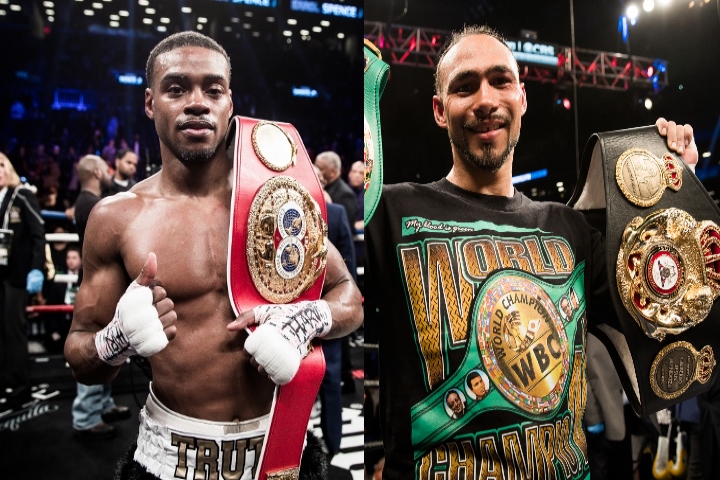 Both fights represented the most-watched primetime organic boxing telecasts of their respective years. Spence was featured in the most watched boxing event on any platform in the 21st century, knocking out fringe contender Leonardo Bundu on an August 2016 card wedged in between coverage of the final night of the 2016 Rio Olympics. A peak audience of 6.34 million viewers was generated from the fight, Spence’s last before challenging for and winning his first major title in a May 2017 11th round knockout of Kell Brook on the road in Sheffield, England.

Since then, the two have been viewed as the class of the welterweight division, a crowd which now includes unbeaten titlist Terence Crawford (36-0, 27KOs) and legendary Filipino southpaw Manny Pacquiao (62-7-2, 39KOs). Despite his own loss to Pacquiao last summer in the most watched Pay-Per-View event of 2019, Thurman continues to insist the welterweight division runs through him.

That viewpoint is not quite shared by his chief divisional rival.

“I guess I’m moving up or going down… one of the two, because, I mean, that sh-t ain’t happening.” Spence quipped during a recent installment of The Last Stand with Brian Custer. “F–k Keith Thurman.”

“That’s a lot of talk for someone who is handling my past work,” Thurman fired back, while theorizing the reason for such dismissive talk. “As an amateur, people would circle my name so they could avoid a Keith Thurman fight.

“Maybe Errol’s doing the same thing; I don’t know. But I know I can challenge Errol Spence in a way that he’s never been challenged.”