LAS VEGAS – Terence Crawford was willing to discuss Kell Brook and a variety of other topics.

His contractual status with longtime promoter Top Rank Inc., however, was not something Crawford was interested in dissecting during the buildup toward his WBO welterweight title defense against England’s Brook on Saturday night. Speculation persists that the Brook bout will be Crawford’s final fight with Bob Arum’s company, but the undefeated Crawford remains noncommittal regarding his future beyond boxing Brook at MGM Grand Conference Center.

“I don’t know,” Crawford told BoxingScene.com following a press conference Wednesday at MGM Grand. “I don’t know. You know, we shall see.”

When asked how much time or how many fights remain on the multi-fight contract extension Top Rank announced in September 2018, Crawford replied, “I’m not even worried about that right now, so I’m not even gonna speak on it. I’m worried about the man that’s in front of me.”

Brian McIntyre, Crawford’s head trainer and manager, declined comment when approached by BoxingScene.com regarding Crawford’s contractual situation. Arum also refused to discuss the contract of a fighter his company has showcased on HBO and ESPN, Top Rank’s network partner the past three years.

If the 33-year-old Crawford left Top Rank, it undoubtedly would enhance his chances of landing the fights Crawford wants against elite welterweights affiliated with Al Haymon’s Premier Boxing Champions. Arum’s company has helped build the three-division champion into one of the sport’s top American stars, but Haymon’s PBC works with three of the potential opponents Crawford has repeatedly stated that he wants to fight – Errol Spence Jr., Danny Garcia and Keith Thurman, in that order.

Manny Pacquiao is the welterweight Crawford most wants to face, though, and that long-discussed showdown seemingly could happen without Crawford leaving Top Rank for PBC.

Pacquiao’s last two fights were PBC pay-per-view events against Adrien Broner (Showtime) and Thurman (FOX Sports), but the 41-year-old Pacquiao (62-7-2, 39 KOs) is not believed to be obligated to PBC for his next bout. Arum and representatives for Pacquaio talked about bringing a Pacquiao-Crawford fight to several sites in the Middle East late this year, but potential investors couldn’t make the event feasible financially during the COVID-19 pandemic without fans in attendance.

“I thought the Pacquiao fight actually was gonna happen,” Crawford said. “That’s the fight we was really in conversations [about]. We was in deep negotiations, and that fight fell through. So, we had to go to the next option.” 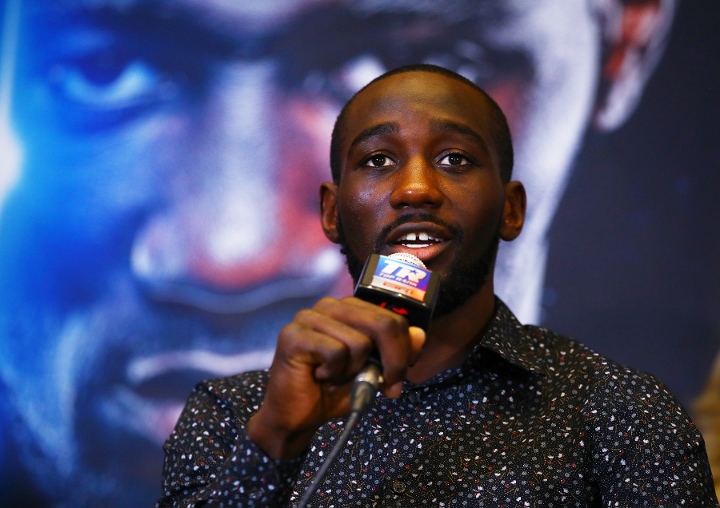 Crawford would like to revisit the Pacquiao bout, but when he was told it couldn’t happen until at least early in 2021, negotiations with Brook intensified.

“You know, the pandemic was one of them,” Crawford said, referring to reasons why he couldn’t box Pacquiao instead of Brook. “Then they thought the fans were gonna be allowed to travel and attend a fight in the Middle East. They put a halt to that and basically said they wanted to wait until the beginning of the year because in the United States numbers was spiking up again. So, they really didn’t wanna too much take a chance on it. So, that was the main reason, the fans.”

They’re on similar schedules, as Spence (26-0, 21 KOs), of DeSoto, Texas, is set to defend his IBF and WBC welterweight titles against Philadelphia’s Garcia (36-2, 21 KOs) in a FOX Sports Pay-Per-View main event December 5 at AT&T Stadium in Arlington, Texas. If Crawford (36-0, 27 KOs) and Spence win three weeks apart, they’ll regain momentum for one of the most meaningful, marketable matches that can be made in boxing.

BoxingScene.com has been informed that Top Rank’s hierarchy believes the company will be involved in Crawford’s fight after he battles Brook (39-2, 27 KOs), whether it’s a joint pay-per-view venture with PBC, preferably against Spence, or another event ESPN would televise.

The primary problem for Crawford and Top Rank if they remain partners beyond the Brook bout is a shortage of promotable opponents unaffiliated with PBC. A fight against the winner of the 140-pound title unification bout between Jose Ramirez (26-0, 17 KOs) and Josh Taylor (17-0, 13 KOs) would generate interest, but Crawford won’t want to wait until the second half of 2021 for whomever emerges victorious.

Brazil’s Teixeira (31-1, 22 KOs) is expected to make a mandatory defense of his 154-pound title against Argentina’s Brian Castano (16-0-1, 12 KOs) early in 2021, thus it isn’t clear if that’s an option for Crawford’s next appearance. Teixeira is represented by Golden Boy Promotions, but Castano also is a PBC boxer.

By late Saturday night, Crawford’s four fights since the aforementioned contract extension was announced will have come against Jose Benavidez Jr., Amir Khan, Egidijus Kavaliauskas, who was the mandatory challenger for Crawford’s championship, and Brook, a former IBF welterweight champ who hasn’t fought at the 147-pound limit in almost 3½ years. Benavidez and Kavaliauskas were unbeaten, but detractors have criticized Crawford for not facing elite welterweights.

Putting together Crawford-Spence next makes the most sense if they beat Brook and Garcia, respectively. Crawford doesn’t feel as though his legacy hinges on finally fighting Spence, which at least leaves him open to remaining with Top Rank after making the fourth defense of his WBO welterweight title Saturday night (ESPN; 10 p.m. EST; 7 p.m. PST).

“I never really felt like I really needed Errol Spence for my legacy or my career,” Crawford said during a virtual conference call Monday. “You know, I’ve accomplished so much in the sport of boxing that, you know, I really didn’t need him. You know, yes, I needed him for my legacy at the welterweight division and becoming a two-time, undisputed champion at two different weight classes. But if that fight don’t happen, I don’t feel like, you know, it’ll hurt my legacy. It just hurts the legacy of [me in] the welterweight division.”

The Omaha, Nebraska, native is fully focused now on beating an opponent Spence knocked out in the 11th round of their May 2017 fight in Sheffield, England, Brook’s hometown. Crawford consistently is listed as at least a 14-1 favorite to beat Brook, yet he is wary of Brook’s size, strength and boxing IQ.

“He’s a great fighter,” Crawford said. “You know, I can’t speak nothing bad about him. He does a lot of things in there that the eyes probably can’t see, and that makes him who he is. You know, he’s big, he’s strong, he’s a nice counter-puncher, he throws great shots in the ring. You’ve gotta watch out for those type of fighters that actually know what they’re doing in the ring, and how to move and maneuver and make you miss by an inch and counter you, things like that. And, he don’t have nothing lose. He has everything to gain, so you know, he’s determined right now. He’s gonna come to fight.”