LAS VEGAS – Now that they’ve both satisfied their contractual obligations at Friday’s weigh-in, Kell Brook is free to add however many pounds he sees fit before he steps into the ring to face Terence Crawford.

There is not a rehydration clause in their contracts that would cap how much weight they can add above the welterweight limit of 147 pounds. Brook therefore could become a super middleweight before he encounters Crawford on Saturday night at MGM Grand Conference Center.

Crawford still isn’t the least bit concerned about any perceived advantage Brook might gain by weighing significantly more than him once the bell rings to start a 12-round main event ESPN will televise.

“I don’t care,” Crawford told BoxingScene.com. “If he wanna pack on 20 pounds, then that’s on him.” 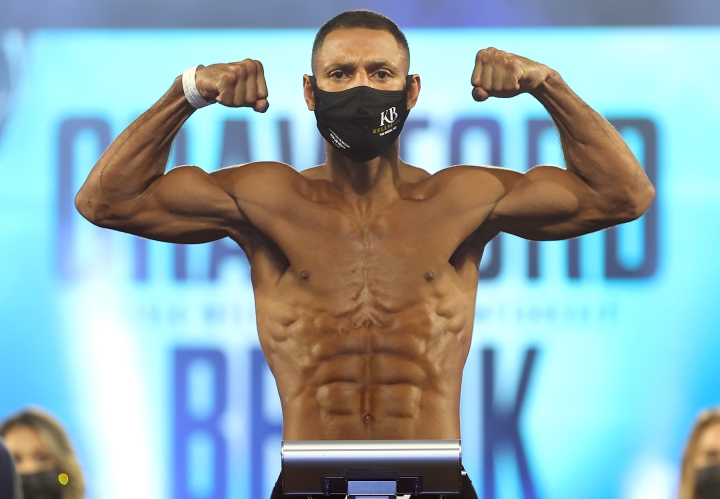 The 5-feet-9 Brook stands just one inch taller than Crawford, yet he has fought as high as the middleweight limit of 160 pounds. Each of his last three fights were contested within the junior middleweight division.

The 33-year-old Crawford has never boxed above the welterweight maximum, but he has grown accustomed to competing against taller, heavier opponents.

“I done been in the ring with a lot of people that weigh more than me, that was bigger than me,” Crawford said. “I’m an undersized welterweight, so that’s never gonna be an issue, where I’m too much bigger than my opponent. So, I’m not worried about it.”

Brian McIntyre, Crawford’s head trainer and manager, believes Brook adding a lot of weight in the approximate 30 hours between their weigh-in and their fight would work to Crawford’s advantage.

“Terence has been fighting bigger guys from day one, or sparring bigger guys since he’s been in boxing,” McIntyre said. “So, that’s not important. What that’s gonna do is slow his ass down, if anything.”

McIntyre isn’t sure how much weight Brook will attempt to pack on before their fight for Crawford’s WBO welterweight title starts.

“If he do, he do,” McIntyre said. “If he don’t, he don’t. I don’t give a f-ck. It ain’t gonna change the outcome of what’s gonna happen to him. You know what I’m saying? Because if he pack on all that weight, it’s gonna slow his ass down.”

Brook didn’t divulge during an interview with BoxingScene.com how much weight he’ll add before their fight. He does consider size and strength two of his biggest advantages versus a three-division champion who is commonly considered one of the top two boxers, pound-for-pound, in the sport.

The 34-year-old Brook weighed in at the 147-pound limit Friday for the first time since the day before his 11th-round knockout loss to Errol Spence Jr. in May 2017 at Bramall Lane, an outdoor soccer stadium in Brook’s hometown of Sheffield, England. Brook defended his IBF belt against Spence, which restricted him from adding more than 10 pounds above the 147-pound welterweight limit before the IBF’s second-day weigh-in the morning of their fight.