One of the sport’s leading attractions will enter her second straight fight behind closed doors.

Taylor—a two-time Olympian and 2012 Olympic Gold medalist who made her pro debut in this very venue in 2016—hit the scale at a combat ready 134.5 pounds for the bout, which also serves as her second lineal and undisputed lightweight championship defense. Madrid’s Gutierrez (13-0, 5KOs) checked in at 134.4 pounds for her first career title fight. 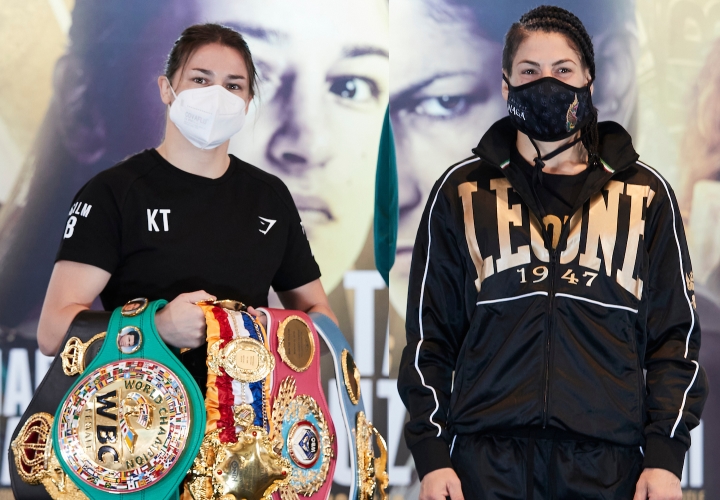 The event comes less than three months after Bray, Ireland’s Taylor again turned away a stiff challenge from Belgium’s Delfine Persoon. Their fiercely contested war saw the two-division and reigning lightweight queen earn a 10-round decision in a repeat win on August 22 in Brentwood, England.

Harper weighed 129.3 pounds, while Thanderz—a 32-year old from Altea, Spain by way of Oslo, Norway—tipped the scale at a title fight-ready 129.7 pounds.

Harper claimed the junior lightweight belt in a sound points victory over Eva Wahlstrom this past February. The feat was followed by a fierce 10-round draw with 2012 Olympian and current top contender Natasha Jonas this past August in one of the best fights of 2020.

Ball weighed 121.9 pounds in at for her first career title fight. The 29-year old from West Midlands enters on the heels of an upset win over unbeaten Shannon Courtenay this past August.

Buenos Aires’ Guanini weighed 125.4 pounds in an opportunity she received in place of an injured Ebanie Bridges. In accepting the fight on short notice, Guanini was permitted to weigh within four pounds of the 122-pound divisional limit in order to proceed although she will not be eligible to win the vacant title.