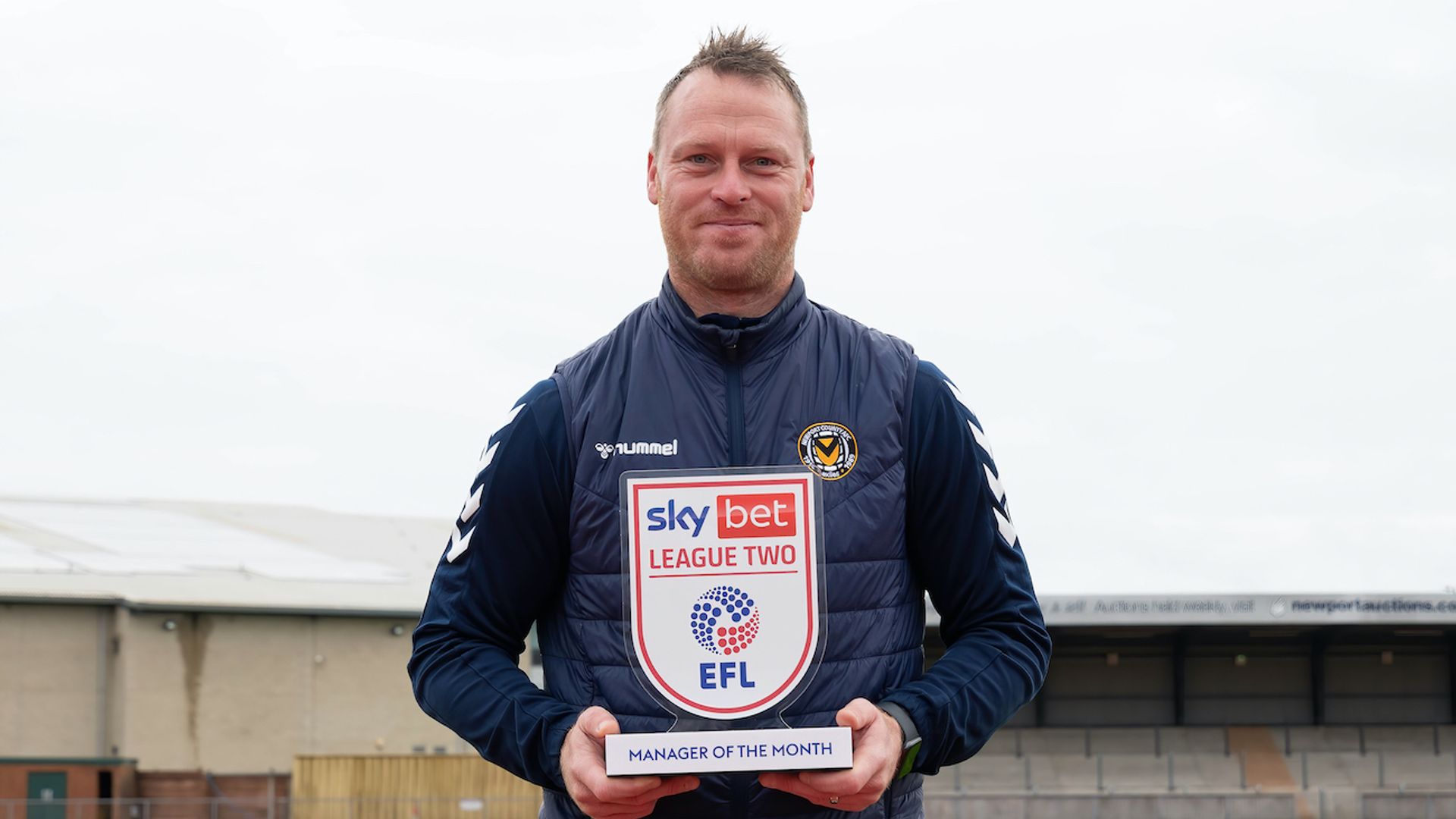 It is a testament to the resilience of the lower leagues that so many involved within them managed to use extremely trying circumstances to their advantage.

Faced with six months of no football, rather than rest on his laurels Michael Flynn set about overhauling Newport County’s style of play. And it has paid handsome dividends thus far, with the club flying high at the top of League Two.

“It’s not just the results, it’s the way we’ve been playing I’ve been so happy with,” Flynn, aged just 40, tells Sky Sports after winning the Sky Bet League Two Manager of the Month award for October.

“We are playing possession-based football and creating a lot of chances. We’ve really adapted to a new style of play, and it’s really coming to fruition.

“Throughout the extended break I had a lot of meetings with my assistant manager, where I was adamant we wanted to play a more possession-based game.

“We worked on that and delivered a presentation to the players on the first day back of pre-season to get it into their heads right away. It also affected our recruitment and who we wanted to bring into the club, but the players who were already here have taken it on board.

“After the play-off final season [in 2018/19] we couldn’t go under the radar anymore, because you’re there to be shot at, but with the extended break we were able to do more due diligence with the players to be more cautious about who we brought in, and work on more patterns of play and how we deliver our ideas to the players. And they’ve been fantastic, it’s been really pleasing to watch.

“We’ve always tried to play football as much as we are now, but we’ve really developed our style and it’s going really well at the moment. I just hope I win a few more of these awards because it means we will be there or thereabouts at the end of the season!”

Flynn’s work with Newport has been remarkable. From a miraculous escape from relegation in League Two, he took them to cusp of promotion in 2019, but saw his side beaten in the play-off final in the depths of extra-time.

There have also been several impressive cup runs – including a journey to the fourth round of this season’s Carabao Cup that was ended by Newcastle on penalties – which has seen him make some notable friends along the way. Flynn still keeps in touch with Mauricio Pochettino after taking Tottenham to an FA Cup replay in early 2018, and can also call upon Pep Guardiola, after Newport met Manchester City in the same competition last year.

“Pep Guardiola is a fantastic man,” Flynn says. “It doesn’t matter whether you’re the manager of Newport County or Liverpool, he treats everybody with the same amount of respect.

“We really bonded from our meeting when we played them in the FA Cup, we still keep in contact and I’ve got the utmost respect for him because he’s a football genius.

“Everybody is looking at how he and Jurgen Klopp play. They have taken football to a new level with their attacking play and emphasis on possession-based creativity.

“They are the marker of where you want to get to. I’m early in my career, but there’s no reason I can’t aim to be as good as I can be. That’s what I’ll always do.”

But there has been more significance to the cup runs for Flynn than just creating bonds with world-class managerial talent. The money they have generated has kept Newport afloat, and it is a wonder why more lower-league sides don’t throw their all into them in the same way.

“Let’s be straight about it, the club is still only going now because of the cup runs we’ve had in previous years,” Flynn says. “We’ve brought in over £3million in revenue, which has seen us clear the debts and get money in the bank.

“It’s enabled us to be a little more advanced in our planning than we could have been without them. The cups are of huge importance to lower-league clubs, and I’m proud we have delivered that for Newport.

“Every manager that goes into a job will say they want to leave the club in a better position than when they arrived. We’re doing that, and we’ll continue to do that for as long as we’re here.”

And promotion would be the next step along the path for Flynn and the club if they are to continue to progress.

“Last season we didn’t kick on like we wanted to from the previous years, where we went from a nearly-relegated side to almost a promotion team,” he says. “We’ve improved along the way and had different experiences and obstacles, and you need to learn from those.

“We know what we want to try and achieve, and all I’ll say at the moment is that we’re on track.”

On current form, there is no doubt about that.