At the end of another 10 grueling rounds with longtime divisional rival Delfine Persoon, the same two thoughts raced through Katie Taylor’s mind.

First was the anticipation of her arm once again being raised in victory. After that—immediately after—was the wonderment of when she would get to do it all again. The sooner the better, despite the visible signs of a memorable second war with Persoon whom the Irish superstar outpointed in a repeat win this past August in Brentwood, England.

“Even though this seems like a quick turnaround, I felt like my body had fully recovered and this was a great time to take this fight,” Taylor told BoxingScene.com ahead of Saturday’s main event, which airs live on DAZN in the United States and Sky Sports in the United Kingdom. “The recovery time is usually quite quick for myself.

“I don’t feel like I took many heavy punches, which is very important.” 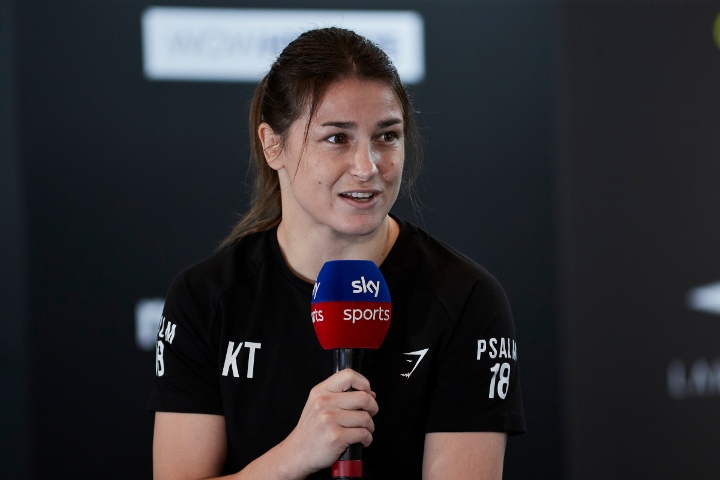 The second win over Persoon came more than 14 months after Taylor barely outlasted the long-reigning titlist from Belgium in their June 2019 undisputed lightweight championship at Madison Square Garden in New York City. The 34-year old from Bray, Ireland—a two-time Olympian and 2012 Olympic Gold medalist—has since added a 140-pound belt to her collection, which she vacated in favor of further cleaning out the lightweight division.

With that came a second fight with Persoon, which was pieced together after watching a superfight with record-setting seven division titlist Amanda Serrano (38-1-1, 28KOs) fall through. Not wanting to waste any time, Taylor jumped at the notion to headline a one-of-a-kind show while also clearing off a mandatory title defense obligation.

It meant training through the recovery process, though a small sacrifice for the trailblazing two-division champ who is willing to accept any available window of opportunity in order to add to her growing legacy.

“Usually I heal quite well,” notes Taylor. “I obviously had a few bruises after the fight, but after a few days I was fine. I didn’t go back into sparring right after the fight.

“This is a different type of challenge for me. [Gutierrez] is more stylistic than the opponents I’ve faced before. Because of that, it’s more experience for myself.”