Denzel Bentley became British middleweight champion after Mark Heffron was retired on his stool at the end of the fourth round at the BT Sport Studios in London with a badly swollen left eye and then said he would follow in the footsteps of  Terry Downes and Lloyd Honeyghan, who came from the same south London amateur club as Bentley and won British titles on the way to becoming world champions.

The pair had battled to a draw over ten rounds in September, but after Liam Williams vacated the title the rematch was made for the British title and if Bentley let Heffron off the hook in the first fight, there was no mistake this time. 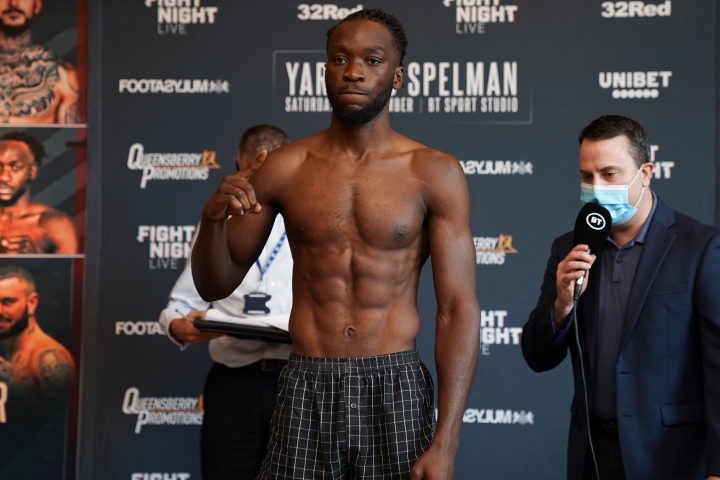 He hurt Heffron with a right hand in the second round and followed it up with an attack the left him damaged around the left eye. As much as Heffron tried to battle back, the damage got worse and by the end of the fourth round, his eye was swollen shut and his trainer, Michael Jennings, pulled him out.

“It feels good man, this is my first title,” Bentley said. “I’m from the Fisher (amateur club) #, with a load of British champions, Terry Downes, Lloyd Honeyghan, Ted Cheeseman, all Fisher boys, so I am going to follow in their footsteps.

“I knew I was hurting him with the right hand, I saw the reaction and put him on the backfoot. The last fight, he didn’t go back once, but the last fight I wasn’t putting my shots together like that, I thought I could move and win it a bit easier.

“This time I knew I had to stay there, hold my ground and put in the big shots. I felt stronger, I felt better in the gym. I knew if I held my ground, I knew I would be able to take him out.”

After a close first round, Bentley took over in the second round, landing a hard right hand that stunned Heffron and following up with another good right that led to Heffron’s left eye starting to swell shut.

Heffron did better in the third round, but Bentley caught him again with a good right early in the fourth round. By the end of the round, he clearly couldn’t see out of his left eye and Jennings, who once fought Miguel Cotto at Madison Square Garden, called over referee Steve Gray to stop the fight.

Caoimhin Agyarko produced an explosive finish to stop Robbie Chapman in the seventh round of their middleweight ten-rounder and turn what was a tricky encounter into a career-best win.

In the main it was a patient display by Agyarko, who was content to pile up the points in the first half of the fight. But just as Chapman was starting to look comfortable, Agrako pounced at the start of the seventh round.

A hard right rocked Chapman to his boots and Agyarko did not let him off the hook. He pounded away at Chapman, who did his best to avoid the onslaught, but was caught clean several times before referee Bob Williams stopped the fight after 33 seconds of the round.

Tommy Fury, the 21-year-old brother of WBC heavyweight champion Tyson, recorded his fourth straight win as he knocked out Genadij Krajevskij with a right uppercut in the second round of a scheduled light-heavyweight four.

Fury went looking for a knockout from the start and after a slightly scrappy first round, he started to land cleanly in the second. He seemed to hurt the Lithuanian with a combination before landing an uppercut that sent him crashing down on his back, referee Williams quickly calling off the count to allow Krajevskij to receive medical care at 2:56 of the round.

Henry Turner dominated his super-lightweight six-rounder against Des Newton, winning every round on referee Williams’s 60-54 scorecard.

Turner showed some slick southpaw skills and beat Newton to the punch throughout, although he never looked likely to secure his first stoppage win, as the 20-year-old took his record to 4-0.

London teenager Micky Burke secured his third straight win in impressive style as he stopped Thomas Broadbent after 2:32 of the second of a scheduled welterweight four-rounder.

Burke cut Broadbent down to size, with a string of body punches, forcing him to the floor midway through the second round. After Broadbent rose, Burke was on him right away and referee Williams stopped the fight as Broadbent sunk to the floor for a second time.

Three scheduled fights on the bill were cancelled due to positive COVID-19 tests.