Popular heavyweight Dave Allen will return to the ring next week as he looks to end the year with a victory.

Allen competes on a Matchroom Boxing show taking place at Wembley Arena on November 21, which will be broadcast live on Sky Sports and DAZN.

It sees Allen (18-5-2, 15 KOs) trying to end the year on a high, following the frustration of his cancelled bout with Chris Lovejoy last month.

The Doncaster boxer is hoping to achieve big things in 2021, as he has targeted a potential British title showdown with Fabio Wardley.

Allen said: “I’ve only had two full rounds in 18 months so I’m hoping to get rounds in the bank and for it to set me up for a big fight next year, hopefully for the British Title against Fabio Wardley.” 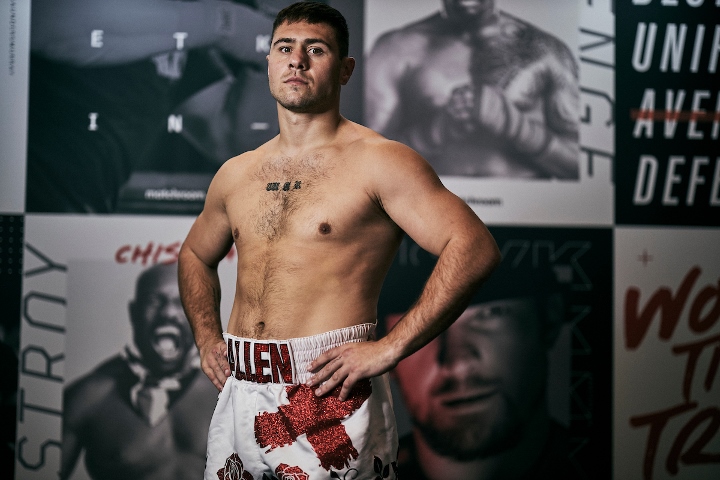 IN OTHER NEWS: Brothers, Joseph and Jeremy Adorno are the latest to ink with Split-T Management.

“We are excited to add Joseph and Jeremy to our roster.  I have known them, and have always thought very highly of their skill levels since they were amateurs.  I can’t wait to help guide them to the highest level of the sport,” said Split-T Management CEO, David McWater.

Joseph, a 21 year-old lightweight has a professional record of 14-0-1 with 12 knockouts. He was a top amateur who compiled  a record of 156-22 and he won many amateur tournaments in his nearly 200 fight amateur career.  He was a 13-time National Champion, who won Silver Gloves, Ringside and Junior Olympic championships. He holds two amateur wins over world champion Shakur Stevenson

“This is a great new beginning for me.  Signing with Split-T Management will provide me new opportunities.  This was the missing piece to the puzzle for me.  Dave McWater and Split-T Management are people that will care for me and for my career.  I have known Dave since the amateurs, and he is a loyal person, so that is very important to me. He reached out to me at the right time and this is what exactly what I needed in my career,” said Joseph Adorno.

Jeremy is a 19 year-old super bantamweight who has compiled a record of 4-0 with one knockout.

As an amateur, Jeremy won over 100 bouts, and was a member of USA Boxing.  He was a National Silver Gloves, Ringside World Championships and 2017 USA Boxing Youth National Championships.

“I have known David McWater since 2015.  He was talking to my brother and I about managing us back then.  I know this is the perfect fit for us, and I see huge things in the future for us,” said Jeremy Adorno.

Jeremy is coming off a unanimous decision win over Fernando Ibarra on January 11th in Atlantic City.

They are trained by their father Anibal Adorno and are both promoted by Top Rank.