Before Friday, the former IBF welterweight champion hadn’t squeezed down to that division’s 147-pound limit in nearly 3½ years. Now that he has made weight for his shot at Terence Crawford’s WBO welterweight title, the 34-year-old Brook can pack on as much weight as he wants before he enters the ring Saturday night at MGM Grand Conference Center. 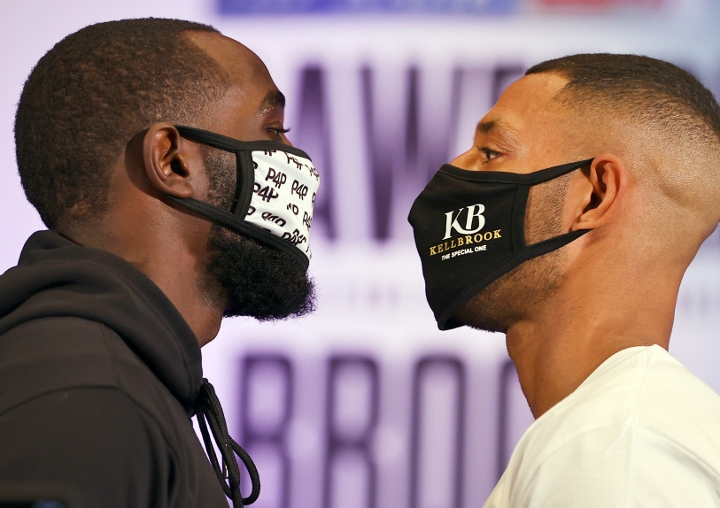 There is not a rehydration clause in their contracts, thus Brook could out-weigh Crawford by a significant amount once the opening bell rings. Crawford stepped on the Nevada State Athletic Commission’s scale at 146.4 pounds Friday for the fourth defense of a title he won by stopping Jeff Horn in the ninth round of their June 2018 bout at MGM Grand Garden Arena.

Brook’s last three fights were contested within the junior middleweight division. He hasn’t competed at welterweight since Errol Spence Jr. (26-0, 21 KOs) knocked him out in the 11th round of their May 2017 bout at Bramall Lane, an outdoor soccer stadium in Sheffield.

ESPN will televise Crawford-Brook as the main event of a three-fight telecast that’ll start at 10 p.m. EST and 7 p.m. PST. Premier Sports 1 is scheduled to begin its coverage of the Crawford-Brook card at 12:30 a.m. Sunday in the United Kingdom.

Moments before Crawford and Brook weighed in, Joshua Franco and Andrew Moloney made weight for their immediate rematch for Franco’s WBA world super flyweight title.

Franco upset Moloney by unanimous decision June 23 at MGM Grand Conference Center. Franco scored an 11th-round knockdown, which was the difference between his 12-round, unanimous-decision win and their closely contested fight resulting in a majority draw.