Amilcar Vidal remains on the hunt for more undefeated records to conquer.

The Sampson Lewkowicz-promoted middleweight from Uruguay puts his perfect record in the line as he faces San Antonio’s Edward Jermaine Ortiz (11-0-2, 4KOs). The two collide this Saturday, live on FS1 from Microsoft Theater in downtown Los Angeles. 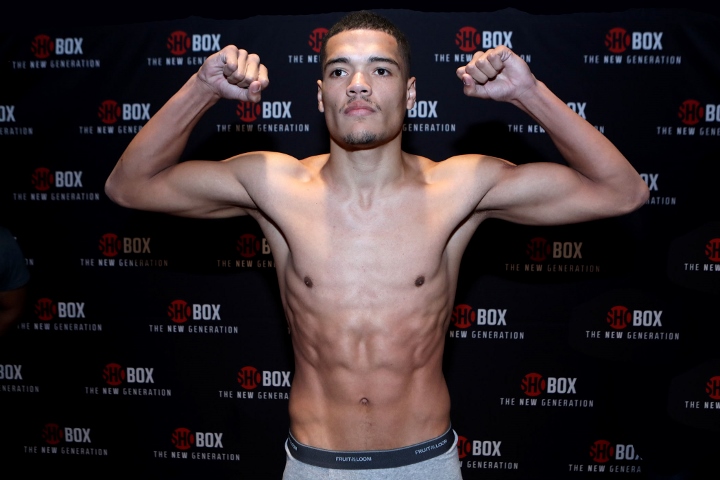 Vidal registered at a fighting fit 161.8 pounds for his first fight since January. The bout marks Vidal’s fourth undefeated opponent in the span of his last six starts; the previous three such occasions have all ended in 1st round knockouts for the 24-year old now locally based in Coachella, California.

Ortiz checked in at 163 pounds for his second straight fight in the Premier Boxing Champions (PBC) L.A. Bubble. The 29-year old Texan is coming off of an eight-round points win over Antonio Todd this past August in this very venue.

Nigeria-bred cruiserweight Efetobor Apochi (9-0, 9KOs) aims to maintain his perfect 100% knockout-to-win rate as he faces Jersey City’s Joe Jones (11-2, 8KOs) in a 10-round bout serving as the evening’s chief support.

Apochi—who is now based in Houston and trains with Ronnie Shields—checked in at a shredded 199 pounds. Jones weighed in at 193 pounds, his lightest weight in four years.

Just prior to the cameras rolling, South Carolina’s Desmond Lyons takes on Diego Elizondo in a scheduled six-round lightweight contest. Lyson (6-1, 2KOs)—who is trained by Ronnie Shields—checked in at 134 pounds. Carson City’s Elizondo (2-2-2, 0KO) weighed in at 135 pounds as the 22-year old seeks to turn around a four-fight winless skid.