The four-division champion Alvarez (53-1-2, 36 KOs) can now gorge on a buffet of foes from any promotional outfit, on any network or platform he chooses.

As BoxingScene.com reported on Wednesday, Canelo’s team is in talks for a potential fight with WBA super middleweight champion Callum Smith – with a target date in late December. The fight could potentially land on DAZN.

Alvarez’s trainer and manager Eddy Reynoso said an opponent, date and location will be announced for the Mexican superstar soon, but he’s already openly contemplating the variety of fights that can be made for his fighter in the future.

“[Errol] Spence vs. Canelo would be interesting. The only thing difficult is the weight class,” Reynoso told Constantino Garcia of Little Giant Boxing. “Canelo is now fighting at 168 pounds. Spence would have to move up. It’s a fight that could be made. But we have to work toward it, so fighters like Spence can start to move up to 160 pounds, and Canelo to 160 pounds.” 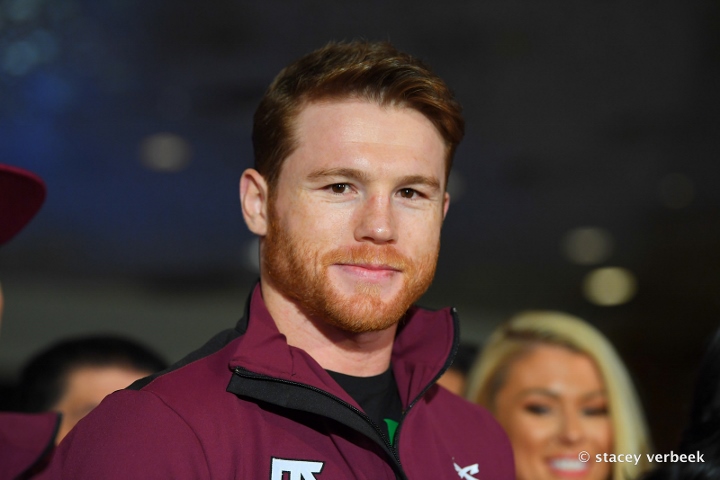 Reynoso then quickly switched his stance to another decorated champion more aligned with Alvarez’s weight.

“Yes, Canelo vs. [Jermall] Charlo is a good fight,” he continued. “Charlo has a lot of qualities. He’s spectacular, tall for the division, strong, and has good boxing skills. Sooner or later, those fights have to happen. We just have to stay in the gym and keep working, try to resolve the problems we have and move forward with Canelo’s career. Charlo saying he would KO Canelo if they fought? Before fighting in the ring, a lot of things are said but inside the ring, it’s a different story.”

Spence Jr. has also expressed his willingness and intent to face Alvarez, but the unified welterweight champion would have to considerably bulk up after taking on Danny Garcia next month and move up a minimum of two divisions for it to become a reality.

“With Canelo, yeah, I’d definitely entertain that. That can happen, that’s a huge fight,” Spence Jr. told The Sun last month. “That would be huge for the Cowboys’ stadium [in Texas] when we’re back to 100 percent capacity. That’s another mega-fight that I could have. I could have a lot of mega-fights. It takes quite a few pounds to get down to 147. I wouldn’t have any problems fighting at 160. But, at the end of the day, it’s down to the guys in suits.”

Much like everyone else in the sport, undefeated middleweight and WBC champion Charlo has also expressed his willingness to fight Alvarez.

“I think Canelo’s gonna try to make 160 again,” Charlo told BoxingScene.com last year. “Hopefully, I can grab his attention [with my wins] and maybe be able to do some spectacular numbers with him. I want that fight to happen … I’m the WBC middleweight champion,” Charlo said. “Canelo’s the franchise champion. Let’s make it happen.”

Reynoso’s plans of facing either Spence or Charlo will take some time to materialize well into 2021, if at all.

One opponent who’s now seemingly on the outside looking in on Alvarez is Gennadiy Golovkin. The Kazakh KO artist signed a lucrative deal with DAZN last year looking to pave a path to fight Alvarez in a trilogy.

After Alvarez axed his exclusive allegiance to the streaming platform, a fight with Golovkin seems much further away from being a reality.