As the boxing public waits for the clash between Gervonta Davis and Leo Santa Cruz on Halloween, the conversation has quickly shifted to Tank’s weight.

Floyd Mayweather Jr., Davis’ promoter, said his junior lightweight fighter should not have any issues making weight, and the same sentiment is being promised by Mayweather Promotions CEO Leonard Ellerbe.

“Tank is going to have zero problems making 130 pounds,” Ellerbe told BoxingScene.com in an interview ahead of the pay-per-view event (9 p.m. ET / $74.99) on Showtime at the Alamodome in San Antonio, Texas. “Tank’s weight has been blown out of proportion. He’s missed weight, OK. It’s unfortunate, but he understands the severity of how important it is to be a professional in making weight. He understands what’s at stake.” 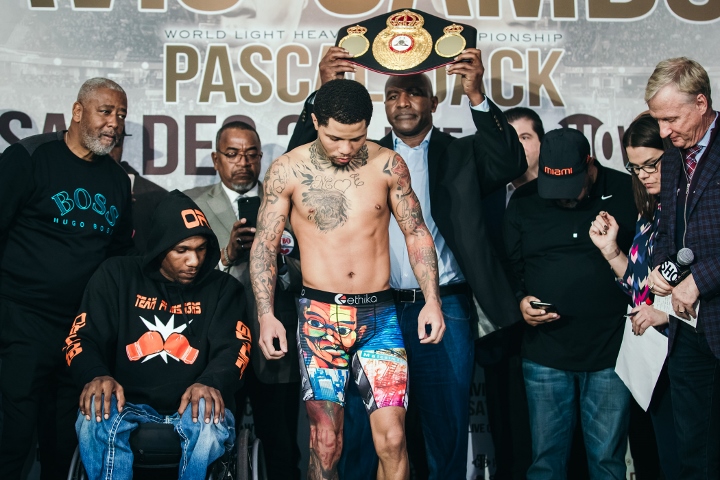 During his last fight against Yuriorkis Gamboa in December, Davis had to make weight in his second attempt, even though he was making his 135-pound debut.

Although he was ultimately successful on the scales, the scene was all too similar for Davis.

In 2017, Davis was stripped of his IBF super featherweight title on the scales after coming in two pounds overweight against Francisco Fonseca.

Davis himself has calmed down detractors who are worried of what the scale will show during weigh-ins on Oct. 30. The Baltimore-bred boxer realizes there is a stiff penalty should he blow weight, and he reassures fans that he’s committed to the cause of coming in at or below 130.

“I want to put on a great performance. I want to make weight the first time,” Davis told Showtime’s “All The Smoke,” a digital show headed by former NBA players Matt Barnes and Stephen Jackson. “I don’t think it’s going to be a hard time for me making weight. I’m making it easy. I’m walking around close to 130. There is a penalty [for missing weight]. I don’t know what it is, but there is money involved. I’m definitely making weight, for sure.

“Leo Santa Cruz is my toughest opponent up to date. He’s going to bring his best … I know when it’s time to get serious. I know how to focus no matter what’s going on around me. That’s what makes me so special.”