Gervonta Davis has established a newfound focus in perhaps one of the world’s most distracting locales ahead of his Oct. 31 Showtime pay-per-view (9 p.m. ET / $74.99) junior lightweight fight against Leo Santa Cruz.

For the first time in his career, the Baltimore-based Davis has moved his camp across the country to Las Vegas to train at the Mayweather Boxing Club, under the auspices of head trainer Calvin Ford and promoter and part-time coach Floyd Mayweather Jr.

Davis, who has struggled to make weight in two out of his last five fights, has also arranged for a nutritionist and personal chef to prepare his meals in order to make the 130-pound limit without any problems. 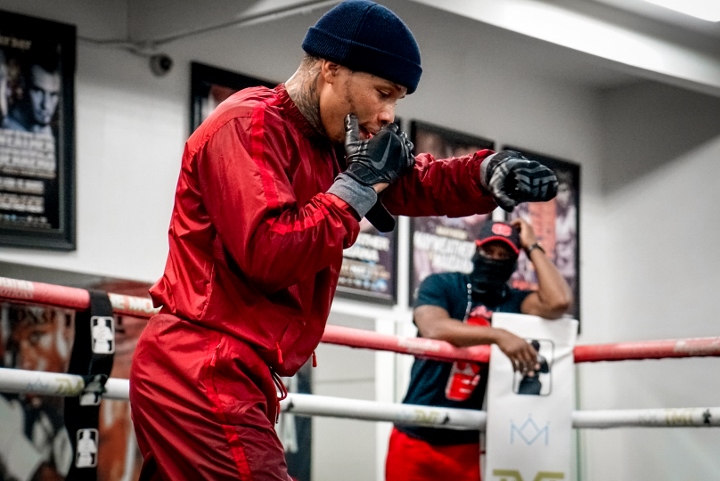 “Tank has 100% focus in his preparation. He’s definitely out of his comfort zone. He’s away from friends and family. He’s not in his usual element. It’s a different environment. The only thing he’s doing is preparing. I’m seeing it on a daily basis, and I love what I see. We will see the best version of Tank that we’ve ever seen on Saturday,” Ellerbe told BoxingScene.com in an interview.

“The difference in this camp, and why I’m very confident about this, he’s made adjustments in camp. It’s the first time in his pro career that he’s had a chef and nutritionist. The weight has come off very easily, and he’s super strong. He’s doing it the right way. As a world-class athlete, you need to have these kinds of things in your camp. He’s listened to everything we’ve asked from him. The very first thing he did when he came out here is I referred a chef to him. It has worked wonders. Tank isn’t far off of weight right now.”

By all accounts, having the Fighter of the Decade Mayweather Jr. in Davis’ ear as he prepares for the four-division champion Santa Cruz (37-1-1, 19 KOs) has been a big boon as well.

“Floyd is working on the details and buttoning things up with Tank,” said Ellerbe. “It’s huge. Who wouldn’t want to have the best fighter ever guiding you along the way? … It’s the simple things that fighters may get away from as they attain more success. Floyd’s been hands-on with some of the basic stuff. He wants to make sure Tank is covered across the board. As a young fighter, you can always improve. Can Tank get better? Of course — but that applies to every fighter in boxing as well. There is no such thing as a perfect fighter.”