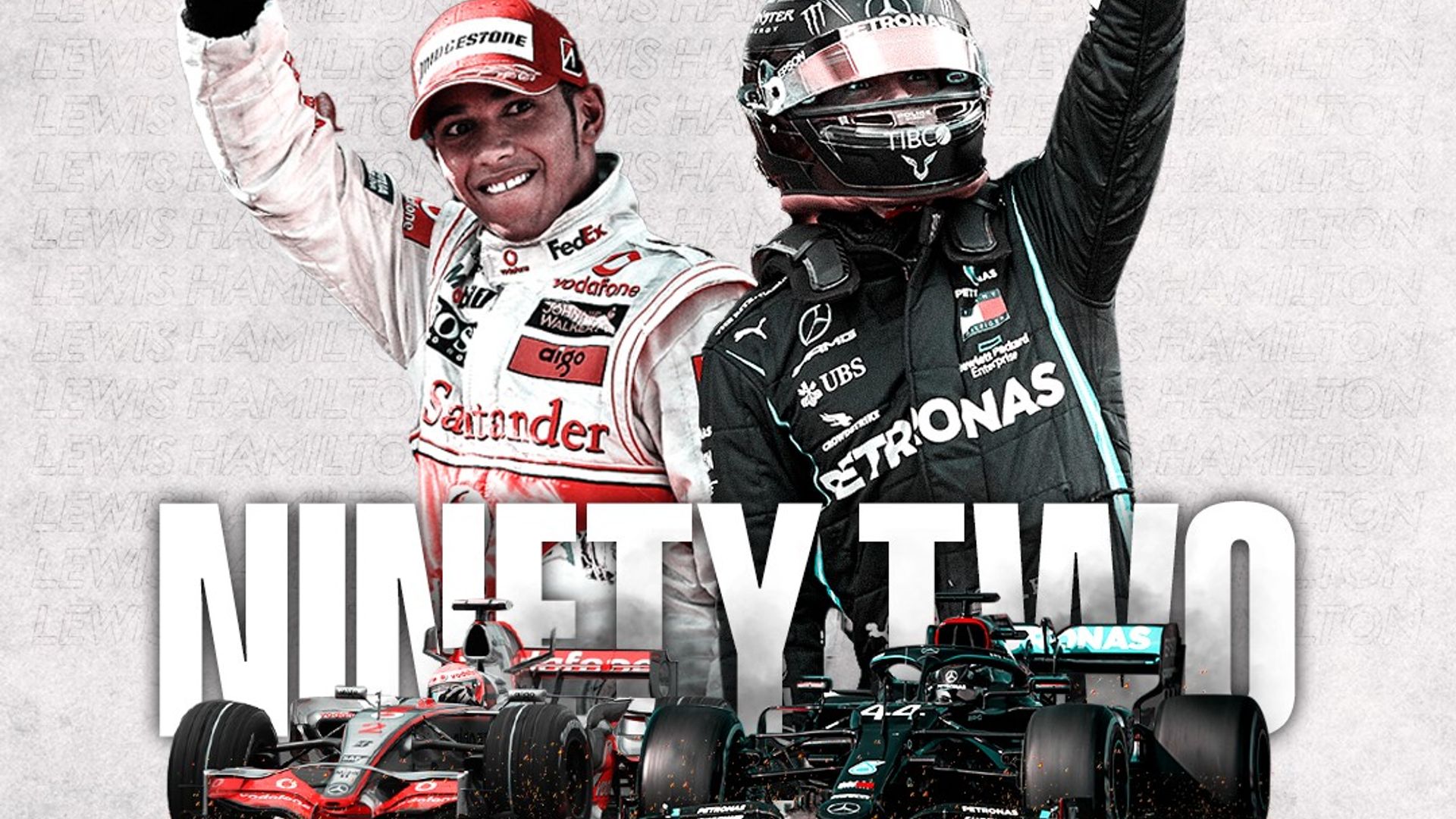 It was a record which seemed unassailable not too long ago – but Lewis Hamilton now has more Formula 1 wins than any other driver in history.

From starring as a youngster at McLaren to becoming a relentless machine at Mercedes, there have been some unforgettable victories through the Englishman’s 14 seasons.

After an impressively fast start to his rookie season – with five straight podiums and plenty of pressure applied to multi title-winning McLaren team-mate Fernando Alonso – it only appeared a matter of time before Hamilton secured his first GP victory. It was fitting, therefore, that the maiden win for the 22-year-old came via a complete performance in tricky changing conditions in Montreal, displaying maturity beyond his tender years.

Hamilton was nearly half a second quicker than Alonso in qualifying to secure his first F1 pole, before holding off the Spaniard into Turn One in the race and then Nick Heidfeld for the rest of the afternoon – keeping his cool despite four Safety Cars. Hamilton had arrived.

On an afternoon when drivers were spinning off all over the place in torrential Silverstone rain, Hamilton both kept his McLaren on the track and absolutely crushed the competition to take the first of many wins in front of his home fans.

While he only started fourth on the grid, that quickly became second and he then pulled off a sublime overtake on new-for-2008 team-mate Heikki Kovalainen into Becketts. Kimi Raikkonen was a threat for Ferrari but after McLaren aced their strategy calls, Hamilton surged clear and eventually took the chequered flag by over a minute.

It is still to this day one of Hamilton’s most dominant victories, most impressive considering the conditions and, understandably, one of his favourites.

It’s difficult to think of Hamilton as an underdog in F1 but he was absolutely that heading into the 10th race of the 2009 season. Hamilton, the world champion, hadn’t won a race in nine months upon arriving in Budapest and his last four results read – 12th, 13th, 16th 18th – while McLaren didn’t even have a single podium to their name.

Hamilton started eighth but starting with more fuel proved an ingenious decision from McLaren, while their star driver made the absolute most of it with a brilliant start and typically solid race, comfortably holding off faster cars behind after the pit-stops. The fact this victory only lifted Hamilton up to eighth in the championship, proves how well he drove.

The Shanghai race was one of only a few highlights in Hamilton’s troubled 2011 season, as he pulled off a number of stunning overtakes to surprise world champion Sebastian Vettel.

Hamilton, after nearly not even starting the race due to a pre-race scare at McLaren, held off team-mate Jenson Button and then made his critical moves in his fourth and final stint, surprising the two-stopping Vettel with a superb lunge into Turn Seven. “I had to take him at a place where he wouldn’t expect it,” admitted Hamilton after ending Vetel’s 100 per cent record to start the season.

Eyebrows were raised when Hamilton swapped McLaren for what was a relatively raw Mercedes outfit but, after Nico Rosberg proved the W04s pace with two victories leading up to Round 10 at the Hungaroring, Hamilton delivered his first for the Silver Arrows in style.

Defying pre-race expectations, soaring heat and two world champions in Vettel and Raikkonen, Hamilton converted pole into what was an unexpectedly crushing victory in Hungary.

Even after just one race in 2014, it was abundantly clear that Mercedes had aced the new rules regulations and that Hamilton and Rosberg would almost certainly be exclusive title challengers. With that in mind, beating his team-mate in an epic race-long duel at Bahrain was all-important for Hamilton – not just for his second world title, but his Mercedes career.

Time and time again Rosberg passed Hamilton up the inside but time and time again the Englishman responded, excelling when attacking and defending in wheel-to-wheel combat, particularly at the end of the race when his team-mate had a big tyre advantage.

Hockenheim 2018 was certainly one of the more remarkable days of Hamilton’s remarkable career.

The Briton had lost title momentum to Vettel heading into the weekend – and his mood became even worse when he suffered a disastrous qualifying failure which left him 14th on the grid. Hamilton had never won from lower than sixth.

But after storming through the field, Hamilton then capitalised on the wet-dry conditions to close in on Vettel, before his big rival crashed into the gravel. It was an amazing win, and crucial to Hamilton winning his fifth crown.

Max Verstappen has emerged as Hamilton’s next superstar rival in recent seasons and their 2019 head-to-head in Monaco remains one of their more thrilling battles.

Verstappen was in Hamilton’s wing mirrors for most of the race – evoking Monte Carlo memories of Ayrton Senna vs Nigel Mansell – and Hamilton’s task was made all the more difficult by the fact Mercedes admitted to giving him the ‘wrong’ medium tyres, which their lead driver had to make last for more than 60 laps.

Verstappen tried with all his might, even making contact with the Mercedes when diving into the chicane, but Hamilton placed his car to perfection at all times. Given that his good friend and mentor Niki Lauda had passed away earlier the week, Hamilton’s win was all the more impressive.

Not his greatest performance, but a record-breaking one. Dominance. Typical, relentless, dominance.