As Wallin sat in a New York City bar with friends watching his trainer working in Lopez’s corner as his prophecy came true, he couldn’t help but wish for one more chance to try shocking the world the way Teofimo did.

Wallin came very close to upsetting the apple cart in September of 2019 when he fought Tyson Fury for the heavyweight title. Wallin gashed Fury over his right eye, with a legal punch, to the tune of 47 stitches. Though referee Tony Weeks and ringside physicians had a close look several times, the fight was allowed to continue and Fury escaped with a unanimous decision, as paradoxical as that may sound.

It was the closest Fury has come to losing, outside of the 12th round knockdown he sustained at the hands of Deontay Wilder in their first of two bouts. Wilder ultimately got a second chance, and now Wallin wants his.

“It would be great if I could get that fight. I’ve been thinking about it and studying it since the last one happened,” said Wallin. “If I would have had those cuts, they would have stopped the fight. I don’t want to be bitter about that, but I think I deserve the rematch.” 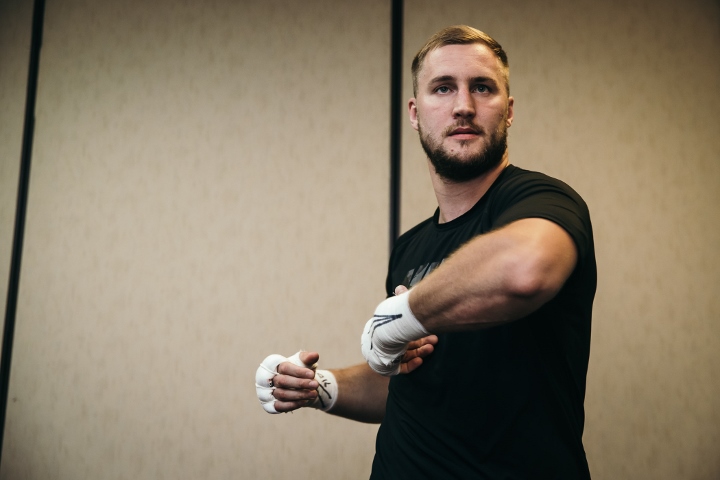 Fury is reportedly on the hunt for his next foe after a presumed third bout with Wilder fell through. According to a report from Dan Rafael for Boxing Scene, the leading candidates for Fury’s return bout on December 5 are former title challenger Carlos Takam and German upstart Agit Kayabel. Earlier this week, a British sportsbook listed the chances of Wallin being chosen at 20-1, but it would seem those hopes may be a little slimmer now.

Wallin wonders why he isn’t at the front of the pack, but he has an idea.

“You know, Fury calls out everybody. In one interview I heard him mention about ten different names, but I never hear my name at all. I don’t know what’s going on with that,” he said. “I gave him his toughest fight. They know that I’m a tough guy, I proved that I could hurt him, I hurt him a few different times, I cut him. That’s not very good news for him.”

In terms of pure mathematics, the 29-year old who is guided by Salita Promotions, has a strong case, having landed more punches on Fury in their bout than any other opponent has according to Compubox.

“Numbers don’t lie,” said promoter Dmitriy Salita. “Otto landed more punches against Tyson Fury in one fight then Klitschko and Wilder combined. If there is anyone in the world that has a chance to beat Tyson Fury, that man is Otto Wallin. We feel that Otto is the best heavyweight in the world.”

Wallin got back in action on August 15 with a fifth round TKO win over Travis Kauffman, which was most notable for the fact that it may have been the first and only bout contested between two fighters who had previously contracted COVID-19. Aside from that, it was a relatively easy night for Wallin, who says he took one week off before returning to the gym, where he now claims to spend five hours a day.

It’s a return to normalcy for Wallin, who despite his big opportunity against Fury in 2019, endured a number of setbacks and heartbreak in the twelve months preceding it. The three fights he saw cancelled during that time period were one thing, but the passing of his father back home in Sweden was a gargantuan emotional burden to carry into the biggest fight of his life.

“I’m in a better place than I was before the last fight,” said Wallin. “The experience is very good for me, having gone 12 rounds with him, because now I can see how to improve. One thing I can do is to pace myself better. My first six rounds were good, but from rounds seven to 11, he won those rounds. There’s a lot I can take from that fight.”

For that matter, there’s something to take away from that fight for the other candidates as well—in fact, if they’re looking for footage of Fury struggling to any degree whatsoever, it’s one of the few places prospective opponents could look.

“I had no respect for him. I think a lot of guys go in there and show him too much respect. I just went in there and tried to leave everything in the ring,” said Wallin. “I think once Fury gets comfortable, he starts dancing and having his hands behind his back and everything. With Fury, you have to make it a fight and not let him get set and comfortable, because then he’s going to outbox you.”

Though Takam has shown himself to be an aggressive fighter throughout his career, and Kayabel as well against lesser opposition, Wallin doesn’t feel they pose a threat to Fury.

“I think all of those fights are good for Fury. I think the other guys don’t have the fast feet that I do. You need that, you need to be able to be aggressive and have fast feet because he’s got very good feet and he’s going to move a lot. If you can’t do that, it’s going to be tough,” he said.

If he doesn’t hit the Fury jackpot again this time around, luckily there’s another big-money heavyweight without a date whose eschewing caused this situation in the first place: Deontay Wilder.

Wallin says he is in discussions with Showtime about a potential December date, which would be too soon for a Wilder fight to materialize in all likelihood. But a 2021 clash with the Bronze Bomber remains a goal—albeit a secondary one.

“Wilder is with PBC and I’m with Showtime, so we can make that happen. But I did better with Fury than Wilder, so I don’t know that he wants that,” said Wallin.