Campbell suffered defeats in his world title fights against Vasiliy Lomachenko and Jorge Linares – although he was competitive in both fights.

On December 5th, Garcia will face Campbell for the WBC’s interim-title.

The winner will become the mandatory challenger to full champion Devon Haney. 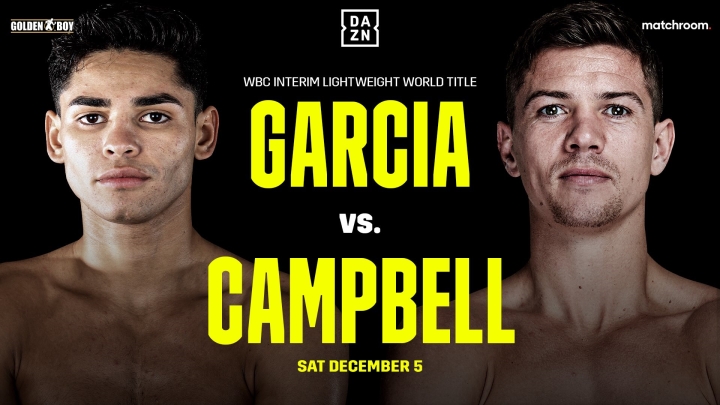 Campbell believes Garcia and his handlers made a big mistake in accepting this fight.

“This will put me at the top of the lightweight division. I have to go through Campbell,” Garcia, aged 22, told Sky Sports.

“He hasn’t fought anybody except Lomachenko and Jorge Linares and he lost those. If your experience is losing? I don’t want that experience. This is his ‘get to the top or not’ type of fight. Me? I’m still that young gun coming up.

“I keep hearing him say he’s going to knock me out! He’s not. He couldn’t even knock out a 126lbs Lomachenko. He’s not going to beat me. He’s talking a good game. But he’ll learn real quick that I hit harder than Lomachenko. This is his last chance but I’ll put the final nail in the coffin [of his career]. He fought Yvan Mendy, who I’ve never heard of, and he lost! So what experience does he have, really?”

“I train with the pound-for-pound champion (Saul ‘Canelo’ Alvarez). He will learn real soon that I’m not there just to do Instagram videos. You’ll see how much I bring. I’m a true fighter, not an Instagram fighter. I may do all that [social media] because I can and I have the opportunity, but I feel disrespected big time as a fighter,” Garcia said.

“I’m not here to play games. I’ll start throwing my punches and he’ll see. If I catch him clean, if he gets hurt, he’s out of there. There will be no escape. It’s over, the moment he gets hurt.”