Sergey Lipinets wasn’t about to get burned twice.

A long-scheduled interim title fight with Kudratillo Abdukakhorov was in jeopardy weeks ago when the unbeaten welterweight was unable to obtain a travel visa from Malaysia. Not even a two-week postponement allowed the fight to see the light of day, though enough time to adjust and properly prepare for any alternative scenario.

“We learned that from last time,” Lipinets told BoxingScene.com. “This happened to us last year, we were ready to fight John Molina (an orthodox boxer), and wound up fighting a southpaw at the last minute (Jayar Inson). We weren’t going to get caught off guard this time.

“My trainer, Joe Goossen and my manager Alex Vaysfeld made sure we were ready for anything. We had left-handed sparring partners and a guy who looks and fights just like the one I’m fighting now.” 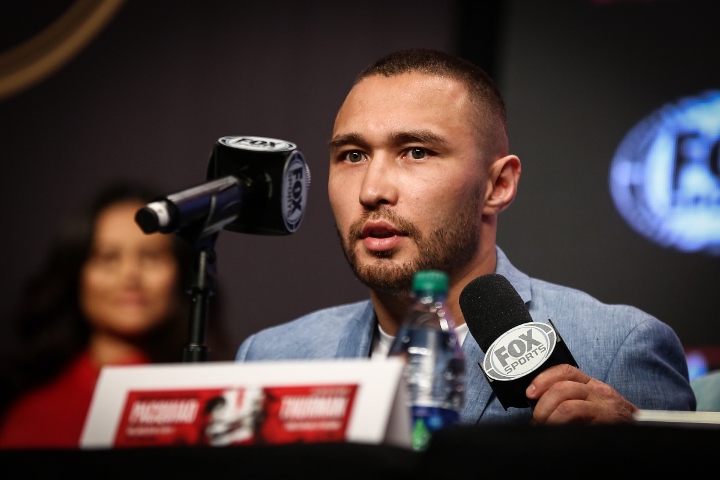 Clayton was one of two stand-by opponents for this event, the other being veteran fringe contender Chris van Heerden—a southpaw from South Africa (now based in the greater Los Angeles area) whose unranked status would have left this weekend as a non-title fight.

Kazakhstan’s Lipinets and Clayton are both ranked by the IBF, whose interim title is at stake. Such status will leave the winner in position to challenge whomever prevails in the December 5 showdown between unified welterweight titlist Errol Spence and former two-division champ Danny Garcia.

“It doesn’t matter who we fight, we stayed ready for any scenario,” insists Lipinets, who has won three straight since a junior welterweight title-conceding 12-round decision to Mikey Garcia in March 2018. “For a while they were telling us it was van Heerden, so we were ready for him. It wouldn’t have been a big deal. When it was (Abdukakhorov), we stayed ready for him.

“Once they told us it was this guy (Clayton), we made that adjustment in training camp. All of my focus has been on this weekend. I’m not even thinking about a shot at Errol Spence. That doesn’t happen if I don’t win this weekend, so I promise that (Clayton) has my undivided attention.”