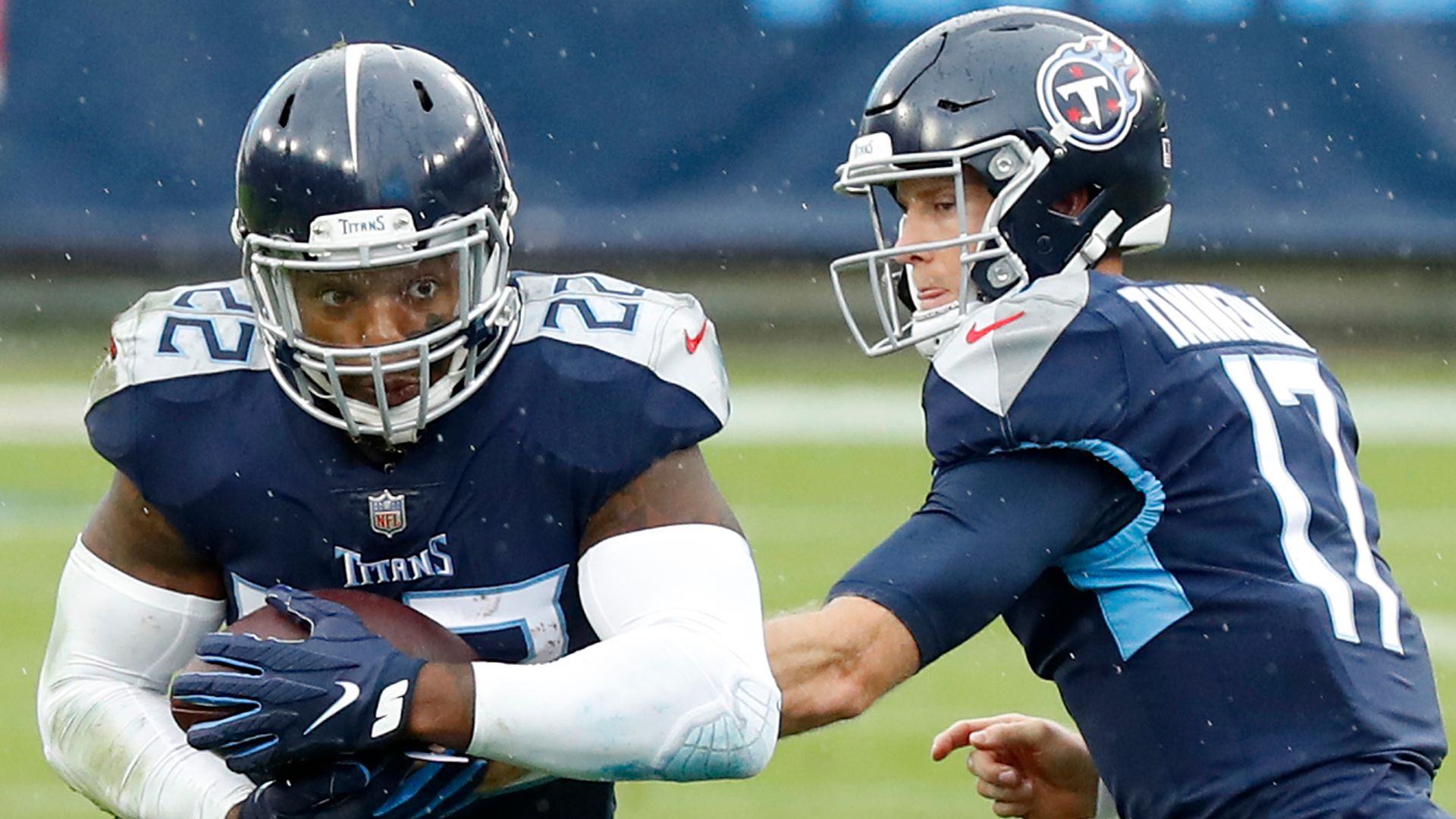 While Ryan Tannehill poses as a beacon of success beyond rejection for NFL quarterbacks, Derrick Henry says pish posh to denial of the value in paying running backs.

The Tennessee Titans tandem embodies everything from resilience and defiance to the art of expert coaching and preparation as the nucleus to both their team’s unbeaten start to 2020 and its ascent under Mike Vrabel.

Tannehill’s career transformation isn’t simply about fuelling the post-Adam Gase revival bandwagon, it stands a message to the forgotten or under-the-cosh play-callers across the league that one setback doesn’t need to define their career. A message the likes of Sam Darnold, Jameis Winston and Dwayne Haskins will be acknowledging with added gusto.

The battering ram beside him meanwhile continues to rip up the book of supposed NFL logic. In an era where one-two punches in the backfield are becoming increasingly common and hefty contracts for a collision-heavy position with no guarantee of longevity are scrutinised more than ever before, Henry continues to astound as a game-winning focal point.

In Week Six’s win over the Houston Texans, the pair saw to the Titans becoming the first team in NFL history to have a player with 350+ passing yards alongside another with 200+ rushing yards in the same game as Tennessee improved to 5-0.

Tannehill was 30 of 41 for 364 yards, a tied-career best four touchdowns along with an interception, while Henry ploughed his way to 212 yards for two touchdowns from 22 carries.

In true Paul Rudd fashion (that’s right, we know memes), it was another “Hey, look at us” moment, Henry’s stunning 94-yard burst to the house the “Who would’ve thought?” to which Tannehill might have replied “Not me”.

The thing about Tannehill is he hasn’t just been a pleasant surprise, he’s been exceptional having arrived as a mere insurance policy for Marcus Mariota back in March 2019.

He now leads the NFL with a 117.3 passer rating and is joint-second for passing touchdowns (35) and wins (12) since taking over as starter for the Titans in Week Seven of the 2019.

The 32-year-old was rewarded for helping Tennessee reach the AFC Championship game with a four-year, $118m extension this offseason, though it proved divisive as Henry, widely-deemed the team’s chief influence, was made to wait on his new long-term deal, such is the uncertainty surrounding committing to running backs these days.

Those anticipating a regression have been left bitterly disappointed. The former top 10 pick has looked as advertised back in 2012, reaping the benefits of a coaching change.

In the red zone he has been elite, going 22 of 26 with 12 touchdown passes, zero picks and a league-best 133.3 passer rating so far this year.

He has also led a league-high three fourth quarter comebacks and four game-winning drives, has the lowest bad throw percentage in the NFL (9.8) and ranks fourth with an 81.8 on-target percentage, according to Pro Football Reference.

The stats aside, he is making the throws of a top 10 quarterback, at the very least (see his dime to find Anthony Firkser between two linebackers on second-and-20 with Whitney Mercilus in his face against the Texans).

Best in the NFL?

Similar questions over the ability to maintain last season’s levels were also asked of Henry, particularly when he was handed a new four-year, $50m deal in July. While some had the running back jitters, others stood for rightly rewarding the staple of the Titans offense.

What’s scary about this season is that the production has been immediate. In 2019 Henry only managed one 100-yard rushing game in his first nine outings.

A 188-yard, two-touchdown performance against the Kansas City Chiefs then kicked off a run of seven 100-yard games in his next eight across the end of the regular season and opening two playoff matchups.

At six-foot-three and close to 250 pounds, he reached 21.62 miles per hour on his 94-yard touchdown run against the Texans, clocking in as the fourth fastest speed from a ball carrier so far this year. He is tied first with Dalvin Cook for most rushing first downs (29), is first for yards after contact (365) and is joint-second in broken tackles on rushes (13).

For defenders, chasing him down is like running in your dreams where your legs don’t seem to be moving and it feels like you’re stuck in cement.

His speed and elusiveness refutes the limitations expected with his size, while Josh Norman and Earl Thomas can vouch for a punishing and old school ‘why go round when you can go through?’ running style.

Between the showreel runs are examples of his ability to gain the tough yards inside as well as his ability to open up the passing game. Henry’s threat in the backfield continues to force defenses in crowding the box, thereby freeing up receivers and no doubt contributing to Tannehill’s play-action success with a third-most 652 yards so far this year.

Between Eddie George, Earl Campbell, Chris Johnson and Henry, the Houston Oilers/Titans franchise has been blessed with its fair share of backfield stars.

“When I was a kid I used to watch NFL Network a lot and they used to have countdowns of the greatest backs in NFL history,” Henry said on Pro Football Talk this week. “Something about Earl Campbell came on the screen and I was like ‘oh my god’.

Remind you of anybody?

Sunday’s matchup with the Pittsburgh Steelers awaits as the Titans’ biggest test so far, by far, in the battle of the AFC’s two remaining unbeaten teams.

Tennessee enter the game ranked No 2 in the league in both total offense and scoring offense, while the Steelers defense sits No 2 against the run and No 3 in scoring.

Left tackle Taylor Lewan, out for the season with a torn ACL, is a major loss to both the Titans’ pass and run game having been vital in the zone blocking scheme designed to clear the path for Henry.

Pittsburgh, who have lost one of their leading tacklers in linebacker Devin Bush, limited the Cleveland Browns’ No 1 rushing attack, albeit with Nick Chubb, to just 75 yards in Week Six.

“This is like Bud Dupree running the football. This guy gets into your secondary, it’s like trying to tackle a guy like Bud, except he’s faster than Bud.”

The Steelers, who lead the league with 24 sacks and 80 quarterback pressures this year, have also allowed the lowest play-action completion percentage (57) since the beginning of last year.

For Tannehill, it’s a case of not only getting the ball out quickly with the likes of Bud Dupree and T.J. Watt in his face, but bypassing one of the NFL’s top secondaries led by Minkah Fitzpatrick, Mike Hilton and Joe Haden.

According to Elias Sports Bureau, Tannehill and Henry are the only teammates in NFL history with 30 touchdown passes and 2,000 rushing yards in a 16 game span.

It’s no overreaction to put both in the MVP conversation after the first six weeks, Tannehill having amassed a top three passer rating and Henry threatening to match LaDainian Tomlinson’s feat as the only player to lead the league in rushing yards for two successive seasons.