Sergey Lipinets and Custio Clayton came in on weight Friday morning for their 12-round, 147-pound title fight Saturday night.

Kazakhstan’s Lipinets stepped on the Mohegan Tribe Department of Regulation’s scale at exactly 147 pounds. Canada’s Clayton also officially weighed 147 pounds for a bout Showtime will televise as the main event of a three-fight telecast from Mohegan Sun Arena in Uncasville, Connecticut.

Lipinets, 31, and Clayton, 33, will fight for the vacant IBF interim welterweight title.

The winner will move closer toward a shot at whoever emerges victorious from the Errol Spence Jr.-Danny Garcia bout. Spence (26-0, 21 KOs) will defend his IBF and WBC welterweight titles against Garcia (36-2, 21 KOs) in a FOX Sports Pay-Per-View main event December 5 at AT&T Stadium in Arlington, Texas. 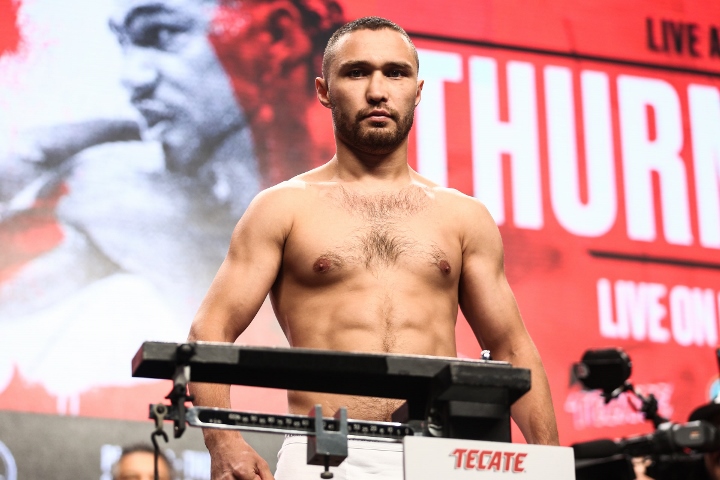 Lipinets is ranked third by the IBF in the welterweight division. Clayton is ranked fifth, four spots beneath the top-rated Abdukakhorov.

Earlier Friday, Xavier Martinez and Claudio Marrero made weight for their 12-round, 130-pound WBA elimination match.

Sacramento’s Martinez (15-0, 11 KOs) officially weighed 130 pounds. The Dominican Republic’s Marrero (24-4, 17 KOs) initially came in at 130½ pounds, but he returned to the scale several minutes later at the contracted maximum of 130.

Marrero, 31, is the WBA’s fourth-ranked contender in the 130-pound division. Martinez, 22, is rated seventh.

The winner will move closer toward a fight against the victor of the upcoming Leo Santa Cruz-Gervonta Davis fight. Santa Cruz (37-1-1, 19 KOs) will make his first defense of the WBA “super” 130-pound title versus Davis (23-0, 22 KOs) in a Showtime Pay-Per-View main event October 31 at Alamodome in San Antonio.

Before Martinez and Marrero made weight, Malik Hawkins and Subriel Matias met their contractual obligations for a 10-round junior welterweight fight that’ll open Showtime’s tripleheader at 9 p.m. ET/6 p.m. PT.

The 28-year-old Matias will fight for the first time since suffering his lone loss – a 10-round unanimous decision to Armenia’s Petros Ananyan (15-2-2, 7 KOs) on February 22 at MGM Grand Garden Arena in Las Vegas.

Hawkins, who also is promoted by Mayweather’s company, last fought December 28, when he stopped Darwin Price (16-1, 9 KOs). Price suffered a knee injury during the fifth round that prohibited him from continuing December 28 at State Farm Arena in Atlanta.

Joe Joyce: Tony Yoka Needs To Do The Work To Get in Position To Challenge Me