Liverpool Light-Heavyweight talent Thomas Whittaker-Hart has signed a multi-fight promotional deal with Eddie Hearn’s Matchroom Boxing and will face Bradford’s Jermaine Springer over eight rounds on Saturday November 14, live on Sky Sports in the UK and DAZN in the US.

Whittaker-Hart (4-0, 2 KOs), a former England and Team GB man who was planning on staying in the amateur game until the Tokyo Olympic Games, trains with Joe McNally at the Rotunda ABC in Kirkdale and has made a perfect start to life in the professional ranks.

The former English National titlist, who is managed by former WBC Cruiserweight World Champion Tony Bellew, made his pro debut on the Liam Smith vs. Sam Eggington show at the M&S Arena in March 2019, outpointing Poland’s Przemyslaw Binienda.

Three wins have followed for the 25-year-old prospect who will be looking to push on under his new promotional banner, starting with a win over Springer (7-1, 1 KO) next month on an historic World Title triple-header card.

“Tony phoned me a couple of days ago to tell me that I’m signing with Matchroom,” said Whittaker-Hart. “I was made up with the news! It’s the best promotional umbrella to be under at the minute so I was buzzing when I found out.

“I’m looking forward to performing on the biggest platform. I’m going to showcase what I know I can really do. I’m pleased that I’ve got the opportunity to be able to broadcast my skills to such a big audience on Sky Sports and DAZN.

“I’ve made a positive start to life in the pros with four wins and two knockouts. I don’t think I’ve showed enough of what I can really do. Now I’ve signed with Matchroom I can start to really push on and I know the opponents are going to get harder, that’s when you’ll see the best version of me.

“I don’t know a lot about Springer but I’ve seen the odd clip of him. I know that he’s a good step up for me at this stage of my career. I’m more than confident in my ability to get the job done and I’ll be more than ready on November 14. It’s a great show to be a part of.

“I want to keep on improving and going up the levels. I’m planning on getting to the top – that’s where I want to be. I couldn’t ask for much more with Tony managing me and Matchroom promoting me. Tony has helped me out a lot and he’s got me into a great position. He’s been there and done it so I look up to him massively.”

“I’m very excited about Thomas Whittaker-Hart!” said Bellew. “He’s been out the ring 12 months but I’m confident that within these next 12 months he will be in and amongst the top 3 domestically and ready for the British Title! He’s been working hard and has been sparring with renowned World Champions and vastly experienced fighters! The best is yet to come from Thomas.”

FRANK WARREN IS delighted to announce that explosive cruiserweight prospect Stephen Adentan is to join the Queensberry Promotions ranks after turning professional.

The 6ft 6″ powerhouse is a product of the Repton Boxing Club, from where he clocked up 16 wins from 20 amateur bouts, with 12 of his wins coming via KO.

A late starter in the sport, the 29-year-old won super heavyweight gold at the ‘King of the Ring’ tournament in Sweden, while also reaching the final of the 2019 London ABA, where he suffered a defeat due to a cracked rib.

Adentan is a friend and regular training and sparring partner of Lawrence Okolie, while he has also shared sparring sessions with experienced campaigners such as Dereck Chisora and Anthony Joshua.

He is also no stranger to the world of entertainment and advertising, having appeared in the BBC drama Noughts and Crosses, as well as worldwide campaigns for Superdry, Nike and Aston Martin.

“This is a big platform and opportunity for me,” said the cruiserweight on his signing to perform for Frank Warren’s Queensberry promotions. “I am well suited to the pro ranks with my punch power and I am very explosive.

“I have seen my friends do really well – such as Lawrence Okolie and Joshua Buatsi – and move on in the ranks and everyone was always asking me when my turn was coming. I said I was just biding my time, but I am ready to really get cracking now.

“Without getting too deep I had a kind of turning point last year with what you could call slight depression when I felt derailed in terms of my plans in boxing. I got distracted and kind of fell out of love with it after having acting roles and learning to be a stuntman.

“It was all glitz and glam but it left a massive void in not being able to punch people! That is when I realised I had to get back into training and then my hunger really came back, my ferocity came back along with my spite.

“I lost my spite for a bit and didn’t have an edge. It soon came back after I started up again and I actually spoke to Anthony Joshua about it and he said the same thing happened to him before he brought it all the way back to when he was an amateur and used to watch all the stuff on Roy Jones jr, Joe Frazier and Mike Tyson. He filled his head up with that instead of all this nonsense outside of the ring, which doesn’t mean anything.”

Boxing wasn’t actually Adentan’s first calling in sport and there was a time when speed of foot counted over fast hands.

“I came to boxing late and I used to be a sprinter over 100m and 200m. I was a fashion model at the same time and I only started boxing because I couldn’t fit in clothes due to being too big! I thought this boxing thing could help me lose some muscle and then when I was hitting people I could see the change in the look in their eyes.

“That is when I thought I could be on to something and that is how it came about.”

Adentan is trained by Steve Broughton in Kings Cross and he reports preparations for his pro debut are well underway.

“I am really working on my boxing skills right now and building on the fundamentals. I’ve got a blessing in terms of the power I possess and what it does to people is a great equaliser, but we have seen with Deontay Wilder against Tyson Fury what happens when it is all you rely on.” 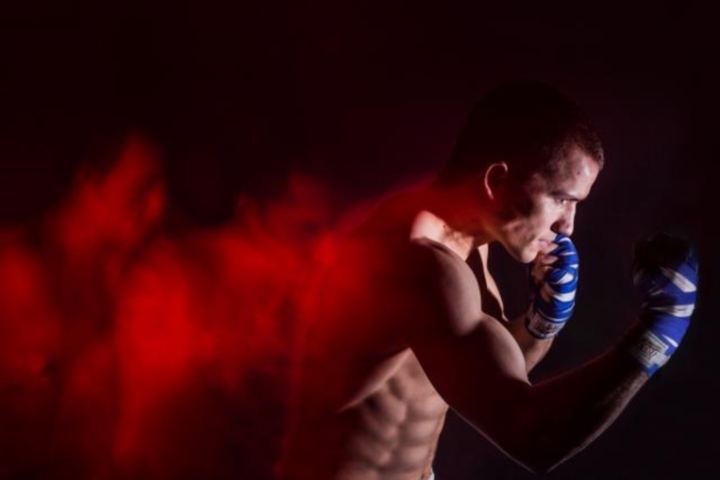 Undefeated Greek boxer Andreas Katzourakis (5-0, 4 KOs) has returned to the United States to begin training under legendary coach Abel Sanchez at the historic Summit Gym in Big Bear, California. Sanchez, who is well known for developing fighters such as Gennady “GGG” Golovkin, Terry Norris, and Lupe Aquino, among many others, has been impressed with what he has seen from the Athens-native.

“Andreas is a very strong kid. He’s smart and has high expectations of himself – he’s doing all of the things he needs to do to grow as a fighter,” said Sanchez.

Despite having a limited amateur background in which he went undefeated in 21 bouts in Greece, Katzourakis has been tested tough early in his pro career – facing opposition with a combined 50 victories and a 70% win percentage. Thus far, he’s passed with flying colors. In his second career fight, Katzourakis handed the rugged Christian Aguirre (8-3) his first knockout loss and in only his fourth fight swept a crafty veteran in the former NABA and IBA Champ Walter Wright (17-5) in a 6-round UD victory.

Katzourakis recently signed with Split-T Boxing to advance his career. Split-T’s David McWater, who also manages the Undisputed Lightweight Champion of the World Teofimo Lopez, said of his new signing, “I was impressed at how advanced Andreas was for his age. Most of the foreigners that come here and move up quickly do so because they’ve had extensive amateur careers. Andreas is very young and has a lot of room for growth.”

Katzourakis is well aware of the unique opportunity he has to bring Greek boxing to the forefront.

“I have been waiting for this opportunity since I started boxing and competing globally. I have sacrificed a lot to be where I am today and I will keep working hard every day until I achieve my goals. I want to thank Split-T Boxing for giving me the opportunity to showcase my skills on bigger stages and also thank my coach Abel Sanchez for accepting me in his training camp and believing in me,” said Katzourakis.

Split-T’s Brendan Segalas stated that, “As a Greek-American, working with Andreas is a dream come true. Although he only just turned 23, Andreas already has the look of a complete fighter. He’s compact with a lot of punching power and strong defensive abilities and reflexes. Working with Abel will take him to the next level. Andreas has the ability – and determination – to become the first Greek World Champion of the modern era.”