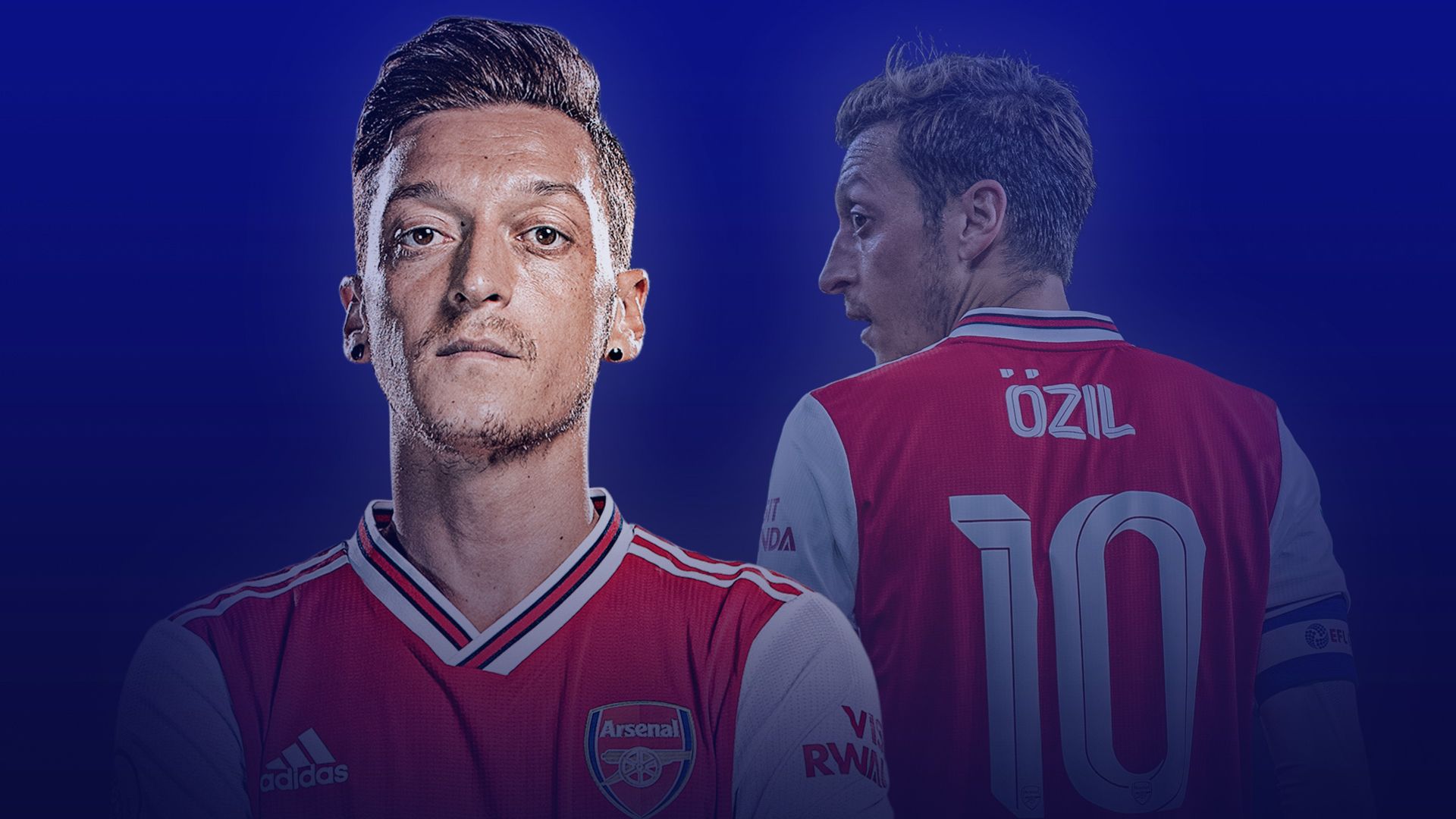 Mesut Ozil has been frozen out at Arsenal after being overlooked for the club’s Premier League and Europa League squads for this season, but was Mikel Arteta right to dump the German World Cup winner?

Ozil, the highest-paid player in Arsenal’s history, appears to have played his last game for the Gunners following his omission from the club’s 25-man Premier League squad for the 2020/21 campaign on Tuesday.

It was another blow after he was left out of their Europa League plans last week. In response, the 32-year-old – whose £350,000-a-week contract expires at the end of the campaign – has accused Arsenal of a lack of loyalty, but vowed to keep “fighting” for his chance.

This is a difficult message to write to the @Arsenal fans that I’ve played for over the past few years. I’m really deeply disappointed by the fact that I have not been registered for the @premierleague season for the time being. Upon signing my new contract in 2018, I pledged my loyalty and allegiance to the club that I love, Arsenal, and it saddens me that this has not been reciprocated. As I have just found out, loyalty is hard to come by nowadays. I’ve always tried to remain positive from week to week that there’s maybe a chance to get back in the squad soon again. That’s why I kept silent so far. Before the Coronavirus break I was really happy with the development under our new coach Mikel Arteta – we’ve been on a positive way and I would say my performances were on a really good level. But then things changed, again, and I was not longer allowed to play football for Arsenal. What else can I say? London still feels like home, I still have many good friends in this team, and I still feel a strong connection with the fans of this club. No matter what, I will keep fighting for my chance and not let my 8th season at Arsenal end like this. 🙏🏼🙏🏼 I can promise you that this hard decision won’t change anything in my mindset – I will continue to train as best as I can and wherever possible use my voice against inhumanity and for justice. #M1Ö #YaGunnersYa

In his statement, Ozil even hinted at non-footballing reasons for his exclusion at Arsenal, but boss Arteta responded, saying: “It was just a football decision and my conscience is very calm because I have been really fair with him.”

My level of communication with him has been high. We know what to expect with each other. He has had the opportunities like everybody else. I’m sad that I had to leave three players out of this list, but I tried to look everybody in the eye and be comfortable with it. It’s nothing related to [Ozil’s] behaviour. It’s my decision.

With question marks over Arsenal’s creativity, however, was Arteta right to dump the man who many see as Arsenal’s most creative player?

Sky Sports‘ football data editor, Adam Smith, examines the stats, while we also hear from former Arsenal stars Paul Merson and Alan Smith, who give their verdicts on Ozil’s situation at the Emirates Stadium…

Upon signing my new contract in 2018, I pledged my loyalty and allegiance to the club that I love, Arsenal, and it saddens me that this has not been reciprocated.

Is the exclusion justified?

Mesut Ozil had a five-month run in the team until March last season and started in Mikel Arteta’s first 10 games in charge – but the Gunners’ win rate nearly doubled without him in the starting XI.

The German notched a staggering 19 league assists for Arsenal in 2015/16, a feat only ever surpassed by Thierry Henry and Kevin De Bruyne last season.

But that campaign proved to be his pinnacle in an Arsenal shirt and his effectiveness at carving out chances has been on the wane ever since.

Even when factoring in his diminished game time over the previous two seasons, his per-90 returns clearly illustrate the creative decline.

The graphic below reveals how Ozil enjoyed operating deep in opposition territory up until the start of 2018/19, when he began to drop deeper in an effort to track back and cover more ground.

Last season, his heatmap presents a player operating in polarised style to his former self, covering swathes of the pitch deep inside his own half, but his talent for creating chances appears to have suffered as a result.

This stark transformation was also reflected in the direction of his passes, with the majority of his distribution going backwards last season, after successive campaigns of primarily threading balls upfield.

Ozil’s tendency to play deeper in recent seasons coincided with frequent criticism of his work rate.

In terms of physical exertions on the pitch, Arsenal covered only a fraction more distance per game under Arteta than under Emery last season and produced an identical number of sprints.

Interestingly, Ozil still ranked above Nicolas Pepe for distance covered and almost matched the Ivorian’s sprint rate. However, all of Arsenal’s forwards surpass Ozil for frequent bursts of pace.

The rankings below suggest most of Ozil’s top performances in an Arsenal shirt came when he was operating almost exclusively in the wide pockets around opposition boxes.

However, the stats still emphasise how Arsenal might lack creativity without Ozil in the squad. Even last season, he created more chances per 90 than any other Arsenal player.

But very few of those chances were deemed to be clear-cut. Here, the likes of Pepe and Bukayo Saka really excel.

So Arteta will be hoping his new signings Willian and Thomas Partey – in addition to the emerging young talents and loanee Dani Ceballos – can fill the void from Ozil’s exclusion.

Merson: A big gamble by Arsenal, wages are Wenger’s fault!

“The lad has got talent so to keep him out of the squad completely is a big gamble by Arsenal. I don’t know if Arsenal are trying to make a stand to say they just want him out, but that’s the only reason I can think of.

“It’s a sad day for Arsenal and a sad day for him. People will say: ‘He’s on £350,000, what does he care’, but it doesn’t matter how much money you’ve got, this lad wants to be playing football.

“I don’t think his game has changed, he plays the same way as he’s played for many years. The game is evolving and there aren’t many number 10s anymore who can just do what they want.

“The game has changed around him and he’s not been able to adapt to that. He’s been used to playing around greatness and as the Arsenal team deteriorated, his game went and he’s the one who was punished.

The game has changed around him and he’s not been able to adapt to that. He’s been used to playing around greatness and as the Arsenal team deteriorated, his game went.

“Now it’s becoming a bit of a chess game. He knows he isn’t playing and he’ll say: ‘You mess me about, I’ll mess you about’. You don’t want it to end like that.

“I don’t think he gets the appreciation he deserves. His wages have affected the Arsenal fans in certain ways, that’s upset them. That wasn’t his fault, that was Arsene Wenger’s fault. What he was doing giving Ozil that kind of money, I don’t know, only he can answer that.

“This should have been done with five or six months ago, they should have sat around the table with him and swallowed a pill.

“If he digs his feet in and doesn’t play for another season, is that his career over? Maybe. Then he’ll be sitting down aged 36 or 37 thinking: ‘Why didn’t I go and play football?’

“Ozil can go anywhere in the world, if his wages are reasonable. He’s earned enough. If he wants to play football, every club in America would have him.”

Smith: Ozil is a wasted talent

“It’s sad, there’s no doubt about it, because it’s a wasted talent and has been for the last couple of years. He hasn’t reached the levels that he did, four or five years back. I can’t remember a time in football when someone on so much money has been ostracised like this and has no chance at all of playing for the first team.

“But Mikel Arteta has made his choice and obviously knows things that we don’t. He’s looked at the player day in, day out. It might be down to his attitude during lockdown when he refused to take a wage cut, and he didn’t take part in team Zoom meetings so perhaps Arteta feels he’s not a team player.

“The irony is that Arsenal do need a player of that ilk at the moment, someone of Ozil’s creative force. Somebody who can unlock defences as they’ve faced a couple of those challenges recently against West Ham and Sheffield United and it was difficult for them.

“I’m sure Arteta would’ve liked to have had the Ozil of four or five years back available. I would say Arteta wields quite a lot of power there, and obviously his title changed, so I’m not sure this is a decision that has been taken out of his hands.

“With the narrowing down of the powers there with Raul Sanllehi going, Arteta – along with the director of football Edu – does call a lot of the shots. From Ozil’s point of view, this period where he’s sat tight on his contract and he’s refused to countenance a move, at the end of his career he will reflect on it being three or four years wasted.

“You only really can appreciate that at the end of your career, so from a personal point of view, he really should’ve tried to find a career elsewhere. He’s got to wait until January now, and with that then being so close to next summer, I would doubt he’ll agree to a move.

“Arteta has made his decision very clear indeed, and nobody will be asking him in the forthcoming press conferences ‘why isn’t Ozil involved?’ He’s drawn a line in the sand and he’ll be hoping to move forward.”

Wenger: Ozil-Arsenal confrontation not just down to sport

Arsene Wenger, who signed Ozil in 2013 for a then-club-record £42m, has defended the player in his new autobiography My Life in Red and White.

Speaking to Sky Sports News, the former Arsenal boss said: “Mesut Ozil is an exceptional football player. What happens at the moment between him and the club looks to be more confrontational. It’s not based only on sport.

“Why is he not playing at the moment? I don’t know. When you’re a football player, you have to respect the decision of your manager and fight to get the confidence back and fight to get back in the team. He can fight, contrary to what people think. He has enough quality to get back into the team, that’s down to him now.”

Asked why Ozil is not in Arteta’s plans, Wenger said: “I don’t know.

“I believe he can play in the Premier League. You practice every day and you make sure if it doesn’t work, you can go and play somewhere else.”

‘Less is more’ with Arteta?

So often synonymous with attacking, free-flowing football, Arteta looks to have made Arsenal a more solid outfit with his “less is more” approach; the statistics show the Gunners are simply attacking less, and having to defend less.